I will get to golf in a moment, as well as Jethro’s pal Al Geiberger, his Andy Williams’ victory with partner Charlie Sifford, and “hoottt dawgg,’’ some of his friends like Sharon Tate, Marilyn Monroe and Elly May.

Right now I’m more concerned about his desire to become a hit man.

That’s because Jethro Bodine has a Glock 19 with a laser sight sticking out of his sweatpants, and doesn’t a laser sight seem unnecessary if sitting two feet apart?

We met at the Edgewood Tahoe GC, but I had no idea this was a place best visited while armed with more than a dependable putter.

What in tarnation would’ve happened had everyone I interviewed been packing?

Instead of blowing his nose on me, would Jim McMahon have blown me away instead?

“Would you like to hold it while you interview me?’’ Jethro asked, putting the Glock in my hands, and I’d like to see Phil Jackson try to avoid my questions now.

The easy way to go here would be to write about his home here in Lake Tahoe, and how the lake reminded Jethro of the cee-ment pond. He’s 79 now, the lone survivor from The Beverly Hillbillies TV show, and not a gray hair anywhere. 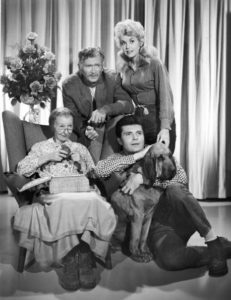 Or, I could mention Jethro’s real name, Max Baer Jr., which would lead me to his father, the heavyweight champion of the world, who killed an opponent in the ring and who once said, “I define fear as standing across the ring from Joe Louis and knowing he wants to go home early.’’

But I’m stuck on something Jethro says: “I was born Max Baer Jr., the son of a great boxer, and I’ll die Jethro Bodine. Period. I never really got the chance to be me.’’

He lies, of course. He doesn’t become a TV icon without talent, doesn’t write a movie that makes millions and change the way Hollywood views songs as movie fodder without imagination. And who else gives up being an astronaut (best Hillbillies episode) to become a folk singer?

He delayed his Hillbillies’ audition, claiming laryngitis, so he could listen to Andy Griffith and Jonathan Winters’ records to master the way Jethro would talk. But while waiting for his chance, he got sloshed with Granny over lunch. Wobbly, he bumped into the door while following Uncle Jed, and with the cameras rolling, he apologized to the door.

Jethro was born, and like you, Howard Stern wanted to know if there had been any hanky-panky between him and Elly May.

“No,’’ he says, “Granny and I came close twice, and there was Uncle Jed, but usually Duke and I slept together.’’

He took Sharon Tate to the Emmy Awards, Tate appearing on the Hillbillies 15 times, a few years later being murdered by Charles Manson’s so-called family.

“I just did a retrospective show on Sharon and they asked if she could act,’’ he says. “Hey, you’re asking Jethro if she can act!’’

He mentions Natalie Wood and Marilyn Monroe, but despite intensive interviewing and a reminder who is holding the gun, he refuses to go beyond innuendo.

He’s still got the black-as-night hair, saying he was coloring it while doing the Hillbillies. When I ask him about his health, he says, “I’m gonna either live or die. I die, and it’s either heaven or hell. If it’s heaven, great. If it’s hell, I’ll be so busy shaking the hands of all my friends, I won’t worry about it.’’

His friends call him Jethro, so there is no escaping the grip the show still has on him. There were 274 episodes of The Beverly Hillbillies, and he was paid for 10 reruns of each, but that’s now ancient history.

“I couldn’t go into a producer’s office and say I wanted to play the part of a neurosurgeon or pilot,’’ he says. “As soon as I came on screen, people would say, there’s Jethro.’’

So, he wrote a movie, on the back of a Hillbillies’ script. He produced Macon County Line for $110,000, and starred in it. The movie earned $25 million at the box office, and he followed that by directing, “Ode to Billy Joe.’’ It was the first movie ever made based on a song, and grossed $27 million.

He grew up — Max that is, grew up — in Sacramento, close to the William Land GC. He and a friend agreed to hit balls to each other. “It was easier than shagging them,’’ Max says.

His friend was Al Geiberger, who would go on to post the first 59 in a PGA-sanctioned tournament, the Danny Thomas Memphis Classic, and be inducted into the SCGA Hall of Fame.

Max won all the local tournaments and could crush a ball, hitting it as far as George Bayer, who was the big hitter of his day on the PGA Tour. That’s why Sifford loved him as a partner; together they won the Andy Williams pro-am in San Diego.

“I was probably the best so-called ‘celebrity golfer’ back then,’’ he says. “James Garner could score, but he had a terrible swing.

“I have so much respect for golfers because I know how hard it is to play. If I was good enough to make it on the Tour I would have done it, but I was half a shot worse than Alan (Geiberger) and that’s terrible. Nobody could have played Jethro as well as I did, but I was probably a good country club player at best.’’ 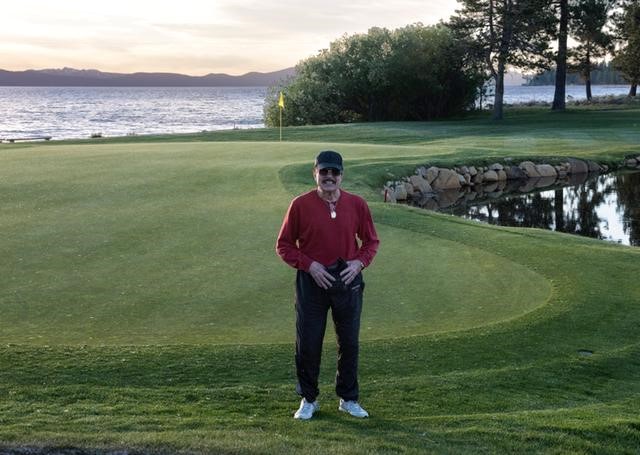 He was quoted once as saying, “Acting is my hobby; golf is my occupation,’’ but what he really wanted to be was a gangster.

“Someone wrote a book about how gangsters only kill each other, and I thought that was good,” he says. “They don’t kill square johns or politicians. They just kill other jerks and I didn’t think that was bad.’’

He worked in L.A. for gangster Mickey Cohen, and knows the names of other thugs like some kids know the Dodgers’ old-time lineup.

“I had come up with a vigilante idea to save the states a lot of money,’’ he says. “When bad guys do bad things, I’d just go kill them. Give me Charles Manson or Jeffrey Dahmer,’’ and there’s something about a blender and rat poison, but my tape recorder stopped.

Before guns, he carried around an axe handle, and before that a bat. “I was Max Baer’s kid, so everyone wanted to see how tough I was,’’ he says. “I was scared of my own shadow and always got beat up.

“I remember running into my house crying, telling my dad a kid had just beaten me up. My dad wanted to know if I had hit the kid back. I told him, no, so he told me to go knock on the kid’s door and tell him it ain’t over. I did, we got into it and I got the best of him.

“That’s when I became a bully. Now when anyone started to say to me, ‘So, your Max Baer’s kid,’ I’d haul off and hit him. He might have wanted to tell me how much he admired my dad, but I knew the first guy to throw a punch was the winner. So, I never let anyone finish the sentence.’’

Max Jr. was married for four years, “But I never had any kids because I don’t think I could have been the father that my father was to me.’’

He had his father’s watch and St. Christopher medal made into a treasure which he wears around his neck. His only regret in life, he says, is his father not living longer.

He’s not a fan of Ron Howard who made Cinderella Man starring Russell Crowe, and what Max says was a poor reflection of his father. They’re probably back in Californy, because that’s the place they ought to be, but, “If Howard and Crowe were sitting here,’’ he says, “I’d hit them.’’

He could talk for hours about his dad, and tries to do so. It’s been a hoot, all right, but they want Jethro to come out to the 18th green, and giving him his gun, it might be fun to watch the little varmints skedaddle when he starts firing at the pin.

The Era of Recycled Water May Be ...