ProfilesSummer 2017
Home›Profiles›Cream of The Crop: Andrea Lee Is Building a Southland Golf Legacy

Cream of The Crop: Andrea Lee Is Building a Southland Golf Legacy

OK, let’s get the negative stuff out of the way. Andrea Lee admitted she couldn’t break 100 playing left-handed.

Fortunately, Lee plays right-handed so well she happens to be the NCAA women’s golf Freshman of the Year, a first for the Stanford women’s program.

The Mira Costa High of Hermosa Beach graduate recorded three wins in her inaugural college season, also a Stanford freshman record. Her freshman scoring average (71.62) is the lowest in school history and just missed being the lowest of all time.

In May, she finished a team-best sixth in the individual portion of the NCAA Championships at Rich Harvest Farms near Chicago and helped Stanford reach the match play semifinals, where it lost to eventual NCAA champ Arizona State, 3-2.

These accomplishments jump off the page, but they are just the latest in a laundry list of golf feats that rival some of the Southland’s most storied legends like Stockton, Alcott, O’Meara and even a phenom named Woods. 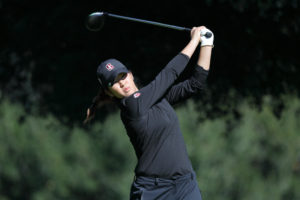 Round 1 of the 22nd Peg Barnard Invitational at Stanford Golf Course.

At the age of 17, Lee earned a spot on the Curtis Cup, which she capped with a 2-and-1 Sunday singles-match victory over Alice Hewson of England. She also won the inaugural Southern California Women’s Amateur at The Los Angeles CC, and was an ANA Junior Inspiration winner, putting her in the field of the LPGA’s ANA Inspiration tournament in Rancho Mirage.

Andrea Lee, 18, currently stands as this country’s best women’s golfer under the age of 20.

You almost have to live in metro Los Angeles to realize that, despite the endless sunshine, the Southland is a difficult place in which to grow and develop as a golfer. If you’re not a member of a private club, access to courses is difficult in that there are hundreds of thousands scrambling for a chance to play.

Moreover, growing up in the beach communities means high-quality public courses inland or in Orange County might as well as be in Kansas. Yes, the map says Industry Hills GC is only 38 miles away, but even on early weekend mornings that trip can take an hour or more. Her high school team played home matches at Chester Washington GC in Torrance, a mere 11 miles via Google Maps but 30 to 45 minutes in typical afternoon LA traffic.

James, her father, got Andrea started in the game at age 5. By age 8, their only child was playing in tournaments, with mother Sunny in the gallery and many times James carrying the bag.

Practice often took place at The Lakes in El Segundo, a nine-hole, par-29 course with mats on the practice range that stays lit until 10:45 p.m. For a top-notch golfer, the Lakes and its 216-yard par-4 ninth is hardly the place where one learns how to hit a cut 5-iron to a back-right pin or a sweeping right-to-left 3-wood around a dogleg, shots needed to compete on more demanding courses.

“It was difficult in the last few years to find places to play for course management experience,” Lee said. “And it was hard to find places to practice. My parents put in so much effort and time to get me to play. My dad loved the game so much, and he played all the time recreationally; but he quit so I could have more time practicing.” 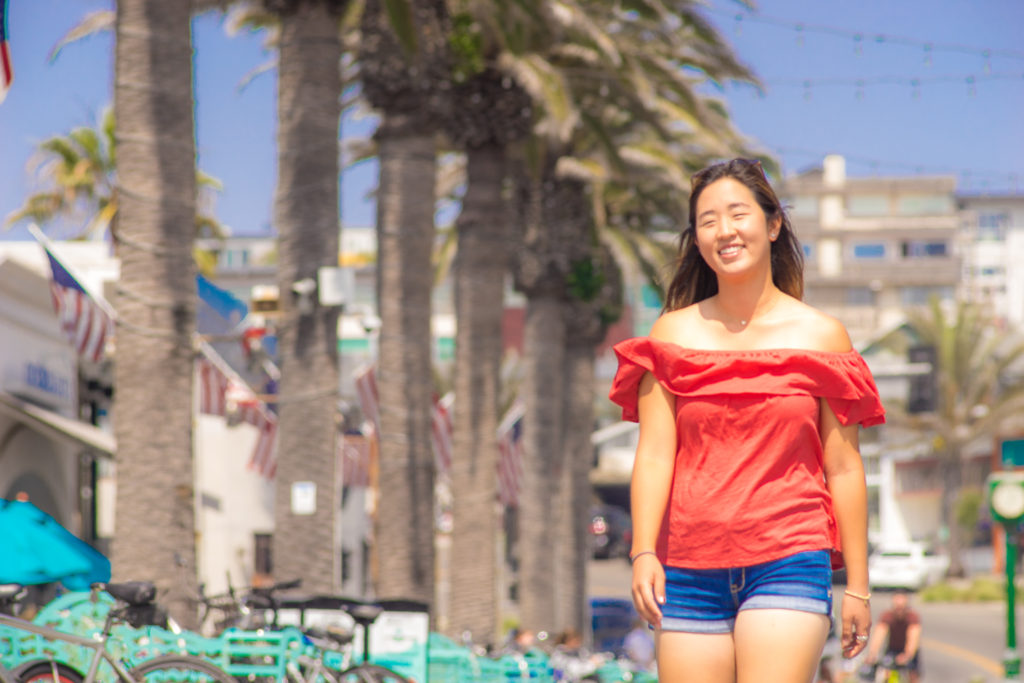 As a junior golfer, she and her family traversed the Southland to find places to play. As she became successful on the junior circuit, travels included national tournaments where she’d come across fellow golfers from Texas and Florida who had no idea of her lack of access to the game.

“They all grew up in places where there were courses all around, and I would have to travel at least an hour to get more experience on better courses,” Lee said. “It was harder, but we made the most of it.”

She took the game lightly in her formative years, but then at age 12 she won an American Junior Golf Association event at Diablo CC in Northern California. That served as a breakthrough moment. “I knew I was good, because I was pretty consistent,” Lee said. “I played lot of sports growing up but I loved golf.”

As a sophomore, she led Mira Costa to the state high school girls title and her summer junior tournament schedule included the circuit’s best. Winning a Rolex junior event and two AJGA events in 2014 made Lee believe she could play with anyone. “I got a lot of top-3s and top-5s, and when I pulled off a couple of victories it made my parents so happy.”

Her hot play continued as she qualified for the 2014 U.S. Women’s Open at Pinehurst CC. There she played a practice round with Michelle Wie, who would go on to win her first major later that week.

“I learned how to play a practice round with Michelle,” Lee said. “The course was so hard. I was 9-over on the first round, but shot even-par [70] on the second [to make the cut by 1 shot]. I birdied three of the last five holes with my dad on the bag. Walking down the fairway on 18 every day with him, that was a great dream come true. That really stands out.” 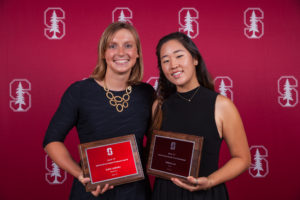 “Obviously, the first time I saw her game, I knew that I wanted her to be on our team,” said Stanford coach Anne Walker. “The first time I talked to her I realized that not only did I want her on my team, but more importantly, I wanted her in my life. She is a fantastic person. Fun, kind, thoughtful, intelligent, compassionate.”

As tough as it was to find places to play, Walker believes that the Southland junior golf circuit is as strong as any in the country. “It’s the population and the weather,” Walker pointed out. “Junior golf there really nurtures younger players so they can grow and be great at the next level. Some of the best players in the country are being recruited out of Southern California, and you just have to look at the success of the women’s teams at USC and UCLA.”

Walker’s job, she said, is a “true worldwide search” for the players with the right academic skills and the talent to play against the best collegiate teams. In Lee, Walker sees a long, steady path to success.

“Six years from now, I imagine it will work out for Andrea with golf,” Walker continued. “She’s very competitive with herself. That’s the best kind. You want someone who never compares herself to others. You want someone who never measures herself against something that can hold her back. It carries into Andrea’s academics. She’s just a great kid. Everyone loves to be around her.”

Lee hasn’t decided on a major. In her first year, she found the best thing about Stanford aside from the people to be the food. “It’s really good.” She loves to snowboard, and can be found in private moments giggling at Ryan Higa videos on YouTube. For this interview, she set a record for longest time needed for a college student to think of an addicting snack food … “Welch’s Fruit Snacks, I guess,” she uttered after some thought.

According to Walker, Andrea’s mental game and her on-course demeanor are her strengths. “She has a terrific calmness and patience that allows her to let go of bad shots quickly and be prepared to hit the next shot with a fresh mind,” Walker said. “She has a remarkable ability to focus in on a shot and then engage in a fun conversation before zoning in on her next shot with full intensity. Andrea lives her life very much in the present and that plays out in her golf game.

“She’s a great teammate with transcendent characteristics,” Walker added. “That’s what you want as a coach. No matter what they choose, the cream rises to the top.”

And to that end, which CD would she choose if marooned on an island: “Head Full of Dreams” by Coldplay, or “Too Weird to Live, Too Rare to Die!” by Panic at the Disco!?

An accomplished one at that.