It’s a strong nickname — one deservedly reserved for a woman who can pound a golf ball over 400 yards. The ‘Trojan’ comes from her genetic predisposition and the ‘Goddess’ from her mystique. Combined, they perfectly describe the Southern California fable.

Troy Mullins was raised in Los Angeles, attending high school at the Marlborough School in Hancock Park. During her adolescence, she wasn’t as much interested in greens as she was a green screen. A child actor, Mullins starred in a PBS/Disney Channel television series called “Kidsongs” and was eventually offered her own Disney Channel show.

“I had just entered high school and academics always took priority in my household,” said Mullins, reflecting. “It was either drop out and act, or stick to schooling with athletics and academics.”

The future drive-destroyer decided on the latter and proved athletically gifted in just about everything she tried. Mullins initially gravitated towards volleyball, tennis and swimming before realizing her talent (and DNA) was in track & field.

Billy Mullins, Troy’s father, was a United States Track & Field star. Holding the world record for the 400-meter in 1980, he was set to step onto the world’s stage in Moscow at the 1980 Olympics, until the Soviet boycott shattered any dreams of glory.

Not too long after, another Mullins came along with patented speed. This time, though, she sported a distinguishable hair-do and a contagious smile.

“I started taking after my father when I was eight,” said Troy. “I was really fast and it just came naturally. I guess that’s not too surprising given his talent.”

While an undergraduate at Cornell University — yes, she’s smart too — Mullins excelled in the 200-meter, 800-meter, 100-meter hurdle, high jump, long jump, shot put and the javelin throw. She was a full package, even if it wasn’t prearranged.

“I honestly wasn’t planning on being a college athlete,” said Mullins. “But a friend of mine just basically looked me in the eyes and said, ‘You aren’t actually going to give up track,’ so I just met with the coach and he decided to let me walk on.”

After college, she stopped running track and ventured back home to Los Angeles with the idea of becoming a U.S. ambassador to China. During some down time she, and her self-diagnosed addictive personality, innocently took to the driving range with a family friend. It started with an 8-iron, the only club she could seemingly hit.

“He kept turning to me, saying ‘You’re crushing that thing,’ said Mullins. “I starting playing for real shortly after that and broke 100 the first time I played.” 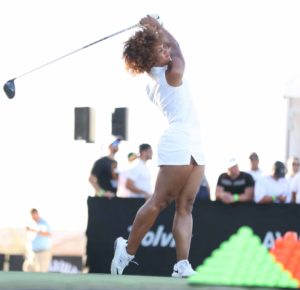 Mullins saw the room to improve and that was something she gravitated towards.

“With track or academics, I always liked seeing progress,” she said. “I became addicted to practicing and getting better. It was all over for me after that.”

When she first starting playing seriously, Mullins didn’t have any metals in the bag — a long cry from her current situation. In fact, the first long drive contest she entered was with her godfather’s regular shaft driver.

“I didn’t know anything about long-drive culture so I went and played with his driver,” she smirked, referring to the 2012 RE/MAX World Long Drive Championship. “I placed second.”

Sensing an uncanny ability, she went and talked with Pat Dempsey, a four-time World Long Drive Champion, based out of Angeles National GC in Sunland.

“He told me it was a totally different sport than traditional golf,” said Mullins. “The swings just don’t correlate so he wanted me to understand that I needed to throw out most of the technical stuff I’d been taught.”

With a new swing rooted in powerful lower body rotation, Mullins hit the ground running and immediately shook the long-drive world. Fast-forward to just last year, at the Mile High Showdown in Denver when Troy unleashed a then-world record 402-yard drive that would have had Athena on full-notice.

“It was incredible,” said Mullins. “Unfortunately, I held the world record for only about five minutes before Phillis Meti stepped up and roped one 406 yards to steal the record that still stands today.”

As Mullins’ legend has grown, so has her popularity. An endearing presence and personality, Troy has had the opportunity to be visible in the public eye, even if those watching don’t know it’s her.

At this year’s Genesis Open at Riviera CC, Mullins pulled off a remarkable prank on unsuspecting junior golfers at a clinic held on the driving range of the famed club. She channeled some of her childhood acting ability and took to the range disguised as an elderly woman. 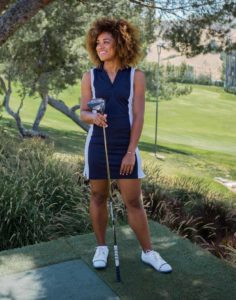 While playing the role of “Grandma Gladys,” Mullins initially poked a modest drive while wearing her purse. Then, she asked for one more shot, discarded the purse and ripped a drive that hit halfway up the fence at the back of the range. You can guess the children’s reaction.

“This sport is so serious,” said Mullins. “We need to make it more fun, so anything I can do to help. It’s not slow and it’s definitely not boring so we just need to show people that.”

Becoming an ambassador for the game is something that Mullins willingly assumes. She already sees a change in the type of player that’s picking up the game of golf.

“All of these visible players on TOUR [Rickie Fowler, Lexie Thompson, Justin Thomas, Michelle Wie] bring swagger to the game,” said Mullins. “Creativity, attitude and confidence oozing from their pores on the course. I think that helps ease the age-old monikers.”

While it’s becoming easier for women to pick up the game, it’s still a challenge.

“We need an invite,” said Mullins. “Women won’t pick up the game out of the blue.”

She believes women want to feel welcome and not like they’re being taught as though they’re toddlers — something she still witnesses firsthand to this day.

“When a woman shows up on the range, all the men seem to flock in hopes of helping her game,” said Mullins, shaking her head. “There’s so much unsolicited advice.”

Talking with friends of hers, Mullins concludes that it’s not comfortable for women to simply go to the driving range alone. Women want to feel like they aren’t being targeted or stick out like a sore thumb.

“Men don’t approach one another and force their advice — they just let each other suffer,” said Mullins. “Let us suffer too! That needs to be addressed. I’m going to start wearing a t-shirt that say ‘leave me alone’ or something for my golf bag like the ‘do not disturb’ hotel signs.”

Mullins’ popular persona has garnered the attention of national brands, such as J. Lindeberg, looking to add a fresh face to their line of luxury golf apparel. Her distinct appearance, jaw-dropping power and soft disposition serve as a marketer’s dream.

As an ambassador to not only brands, but women and the entire game of golf, Mullins will continue her charge towards World Long Drive stardom.