Equipment
Home›Equipment›The Great Fashion Takeover: For many golfers these days, looking good is an important as how you play the game.

The Great Fashion Takeover: For many golfers these days, looking good is an important as how you play the game.

Over the holidays, my father-in-law and I took my son for a quick nine-hole round. We had to hurry to the course, to get out ahead of a tournament that was about to start. The tournament field looked fierce. About 30 kids, aged 7 and 8, were gathered on the practice green. At least two of them were dressed in orange from head to toe. They had the entire look down pat, including the Yupoong hat with flattened bill. Rickie Fowler has only one PGA Tour win, but his fashion influence apparently extends far and wide.

It struck me that the next generation of golfers will never know anything different. From their perspective, bright colors, individual expression and high performance clothing has always been a part of the game. And my son, who is only a year younger than the kids who were lined up for that tournament, is no different. He was wearing turquoise pants while we watched all this go down.

“Unlike other sports, golf doesn’t have a uniform. It’s because of that that there is such a huge variety,” says Davide Mattucci, director of apparel global product marketing for adidas Golf. Point taken. Kids on a basketball court want to move like LeBron. If you’re talking football, it’s all about that jersey. My son dressed up as Colin Kaepernick for Halloween last year. But in golf, the sport encourages fans to dress like … themselves. 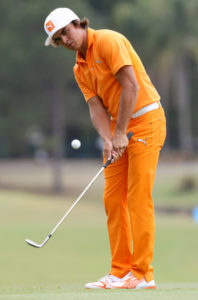 You find a few dressed like Fowler, and not too long ago you saw guys wearing red polos with black pants and a black Nike hat like you know who. But more often than not, today’s golfer avoids the uniform, instead taking the opportunity to find his or her own look.

I’m completely aware of the fact that not every golfer thinks this way when getting ready for a round. I know quite a few guys (my dad being one), who just grab the polo that’s on top in the drawer, find some shorts, and feel ready. But I’m one of those guys who thinks about this stuff. Yep, I’m willing to admit it. If going on a weekend golf trip, I’ve got the threads for all three rounds planned out before I get to the airport.

Maybe practicality is your thing. That’s fine too. It’s not just about looking good in orange or yellow or red. There is a method behind the madness. That right side pocket in your pants has to be big. We’ve got balls and tees and markers and divot fixers to fit in there. I want to reach in when I get to the tee box and find what I need, and I don’t want to have to adjust my underwear when I’m done.

The clothing has to have a natural flow to it. We want loose, but not baggy. If I happen to be playing in the summertime in Palm Springs (sometimes the deals are just too good to pass up!), then I’ll need a dri-fit polo that won’t turn into a wet rag after five holes. On the other hand, should I end up playing at 6 a.m. in November and need a pullover, I need that pullover to not grab at my arms as I’m coming through the ball. Golf is hard enough as it is, and I know how to mess up a swing without my shirt adding to the frustration.

More from Mattucci: “A decade ago, a cotton polo was a golf polo to many consumers. Now you have a guy who will only buy his golf gear from authentic golf brands because there’s an inherent performance expectation.”

In other words, the fashion craze did not come from a shallow place. It came from a “we want to be better” place. I already mentioned LeBron once … allow me to do it again. When the King was in Cleveland, he was performing at an incredibly high level, but the people around him let him down. So he left and went to a place where he knew if he performed those around him would follow suit. That’s what golf clothing is. That dri-fit orange flowy polo is Dwyane Wade. It’s that sidekick piece that will help when you need it.

A wise man once said, “Yo money, it’s gotta be the shoes.” In golf, shoes have been revolutionized. I can remember about 10 years ago standing over a shot with some work buddies at Old Ranch Country Club. Just as I was getting ready to pull the club back, a co-worker says to my boss, “Hey, will you please give Mark a raise so he can afford something better than those $30 shoes he’s wearing.” That got a good laugh from the group. However, the fact that I still remember that quip 10 years later tells me I took it to heart. A golfer needs good shoes the same way a luxury car needs good tires.

I have my 50s, 60s and 70s still ahead, and I can ride a cart then. For now, I walk when possible. I enjoy it. The air feels cleaner that way. Plus I have more time to recover from that awful shot I just hit before I have to hit another one. To do that, I need good shoes. Shoes that are comfortable, but don’t make me look like a bowler.

My favorite pair of golf shoes I have ever owned are in my closet right now. They’re a pair of the adidas CrossFlex, and if you pick one up you’ll feel like you are holding a paper cup. They’re that light. True story: I suffered a mild ligament tear in my ankle last year playing basketball. Yep, another one of those dudes in his late 30s trying to act like he’s still in high school. Guilty. Anyway, I was told by the doc that I needed to wear an air cast for a couple months.

The hardest part of getting dressed each morning for work was fitting a pair of shoes over that cast and not feeling like there was a rock in my shoe once I did. Adidas to the rescue. For some reason, these kicks made my foot feel like it was wrapped in a pillow. I found myself wearing golf shoes around the house, to the grocery store, wherever. I looked a little funny, but who cares? My foot felt better in those shoes. Now that’s performance.

I asked Mattucci about the revenue that is now created by golf apparel. He said, “It’s become enormous, and in some stores has overshadowed the hard goods business.” Think about that. Do golfers care more about how they look than how they play? I guess you could make that case when you walk into a golf superstore. Take a look around. In the back, there’s usually some sort of swing simulator, surrounded by clubs. Nearby sits a putting green surrounded by putters. Man, I putt well on those greens. Makes a big difference when there is no break whatsoever, but I digress. About 25 percent of the floor space is dedicated to the actual game. The rest: apparel. Shoes. Hats. Socks. Belts. (Note to self: Still gotta get a white belt.)

I have a bit of a different spin on why the great fashion takeover is happening in golf, starting with the fact that I think it’s a great thing that sends an important message.

Take a look at this from the perspective of a Tour player. I’m pretty sure they don’t grab whatever is on top of the drawer when deciding what to wear on Sunday at The Masters. In fact, we know of at least one player who will only wear a red shirt on Sunday, no matter what tournament, and no matter where he is on the leaderboard. “Being an individual sport gives them an opportunity to express a little more of their personality than a team-sport,” Mattucci says.

Athletes, pro or amateur, are always looking to express themselves. And it’s often not well received. When a wide receiver spends 30 seconds dancing in the end zone after a touchdown, he’s expressing himself, but he’s called a hot dog for doing it. In basketball, spend too much time staring down your opponent, and you’ll get a technical foul. Try staying at home plate and watching your home run ball on the baseball field, and you’ll get one in the ear next time you’re at the plate. But golf is where true expression can be done in a respectful way.

Golfers rarely celebrate. And outside of a few players, most don’t get any attention at all. I’d argue that the post-Tiger future of the sport needs some strong personalities to come forward. Fashion is one way to do this. The late Payne Stewart, for example, made a name for himself wearing NFL logos on the course. That’s great stuff. Express yourself, be yourself, let the world know who you are. When I see 75 percent of a golf store dedicated to gear, I think of all the opportunities it gives players to express themselves. So when 7-year-olds are dressed up as Rickie Fowler, it’s about so much more than just clothes. It’s good for them, and it’s good for the game.