In the past several years, Southern California has produced some extraordinary young women golfers. Add San Diego–raised, 19-year-old Muni He, affectionately known as Lily, to that list. Born in Chengdu, China, she had a club in hand by the age of five and, via a golf kinship with her father, got involved in tournament play just a year later. When she turned seven, her family moved to Vancouver, British Columbia; by the time she had reached middle school, the crew had relocated to San Diego.

Through it all, she preferred clubs over keys.

“I was doing a lot of things back then,” she reflects. “I was playing piano, I was dancing. And I didn’t really like any of them; in fact, I hated piano so much, I asked my dad that if I practiced (golf) for an hour every day, I wouldn’t have to play piano anymore. And he was like, ‘OK, that’s a good trade,’ and that’s when I started practicing my game regularly.”

Such practice was fast put to task as she adjusted to the SoCal golf hotbed.

“When you compete in Southern California, a lot of the top junior golfers from all over the world have come here so they can play against the best,” she says.“It was definitely stronger competition, but at the same time I felt that it was a really great place for me because you really learn and grow from competing against the top level of player.”

From U.S. Kids events and SCGA tournaments to AJGA competitions, He was fast to recognize that she was competing in a generation of future stars. “It’s pretty amazing that a lot of the girls that I grew up with are all such amazing players,” she recalls, referencing Andrea Lee. “And Haley Moore; she’s so amazing. Being able to watch her make the last putt to win the NCAA Championship with her team was incredible.”

A USC commit while just a freshman in high school, He would attend Torrey Pines High for two-and-a-half years before finishing up her diploma via online homeschooling.

“I wanted to attend USC a semester early and that required me to take extra classes,” she says. “I didn’t want to go through the whole process of changing schools again, having moved a lot throughout childhood. I mean, that can be fun and you make new friends, but with just a year and a half left, I didn’t want to deal with the stresses and complications during that time.” 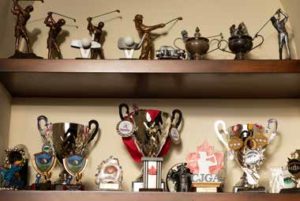 At USC, playing alongside fellow SoCal standouts Robynn Ree and Victoria Morgan, He posted a solid freshman campaign, culminating with match play wins in both the NCAA team quarter and semifinals.

And yet, despite an earnest adoration for her college surrounds, she felt the lure of professional golf. After making it to the final stage of LPGA Q-School, she opted to go pro at the close of 2017, with a Euro debut at the Omega Dubai Ladies Masters. “When it became a possibility, it was really challenging for me. On one hand, I knew that turning professional and playing on the LPGA is my ultimate dream and goal,” she says. “And on the other hand, USC has always been my dream school, and I just loved the two semesters I was there.” A rush of budding stars amid the touring ranks played a part in He’s decision. “Nowadays, in women’s golf, you’re getting all these girls who are younger and younger,” she says, “and I just felt that if I waited another three years, I would’ve been late.”

With a missed cut at Q-School’s closing stage, He’s rookie pro campaign has found her dueling on the Symetra Tour, competing with other LPGA hopefuls in the Volvik Race for the Card, which awards 10 LPGA memberships for the ensuing season based on cash earnings.

At the onset of the year, He’s Symetra account found more stunt than symmetry, as she failed to record a top-10 in her first eight starts.

“It’s quite challenging, and a little more than I thought it would be,” she says of her Symetra experience thus far. “All these women have the ability, the talent, the potential. To win or even finish in the top five, you have to go really, really low.”

Come the official start of summer, however, He found heat.

Crediting enhanced mental strength, a closing round 66 saw her earn a tie for seventh at the Forsyth Classic in mid-June. Two weeks later, her LPGA dreams enjoyed a serious boost with a superb showing at the Prasco Charity Championship in Cincinnati, Ohio. Authoring rounds of 65, 69 and 67, her 15-under tally produced a dominating, 4-shot win and a $15,000 surge up the Volvik standings.

Referencing a hot putter at Pracso, He further acknowledges a return to form in her iron play, which she’s always considered the strength of her game. Moreover, she’s fast to praise the tutelage of her new coach, SoCal-based Ted Oh, who also works with Lydia Ko. (And, yes, that would be the same Ted Oh who qualified for the 1993 U.S. Open at Baltusrol as a 16-year-old sensation from Long Beach.)

Concurrent to her rise in play, He has witnessed a palpable ascent in her social media following.

In early August, she was approaching 155,000 followers on Instagram. To provide a sense of context, that’s as many followers as three of the world’s top four players — Ariya Jutanugarn, Sung Hyun Park and So Yeon Ryu — have on their accounts … combined.

“I really don’t know how it happened, honestly,” He says of the lofty number of followers. “I really only got social media a couple of years ago, and it really didn’t cross my mind how or why so many people would want to follow me. But it’s been really amazing being able to connect with people all over the world, and golf is a huge part of it.”

Combining golf photos with lifestyle images on her page, He says she never started the account with any intent of building a vast following.

“It’s really just a personal use for me, and it was never really meant to grow to this extent,” she says. “I just always posted what I wanted to post as a 19-year-old, or as an amateur golfer. It just so happens that it attracted a lot of people, and I’m just really thankful for that.”

While He is paving her unique road in pro golf and is already a winner before the age of 20, she’s careful to remind herself that she’s still a teenager.

“I have to remember that I am not defined as just a golfer,” she says. “I’m a 19-year-old girl, and I enjoy so many other things in life, and golf is just a part of my life, a part of who I am. But I’m not defined by it. I don’t think I’m really defined by anything; I’m just trying to be myself.”

Being herself includes an impressive purview of life’s intersections between sport and social media.

“I really only got social media a couple of years ago, and it really didn’t cross my mind how or why so many people would want to follow me.”

“I never consider myself a pretty face on a golf course,” she says. “To me, golf is just golf; and competition and how I look are completely separate. To me, looks are something which shouldn’t prevent you from being able to play well or be accomplished as a golfer.”

+ LOOPING IN THE FAMILY

At the Prasco win, He’s dad served as her caddie, as he has for much of the season. It was only recently that she opted to take on a professional looper.

“My dad is kind of like my personal support animal,” she laughs. “But he’s not getting any younger, so I don’t want to put him through all the ups-and-downs on the course, even though I know he’s more than happy to.”

Parental backing has served He well on and off the course, as she travels with her parents and has enjoyed her mom’s cooking while on the road.

“I’m super lucky,” she says. “I don’t know what I would do without them. I know a lot of the girls on Symetra, they either travel alone or with another player, and that can be really challenging.”

Entering the home stretch of the Symetra season, she was tied for the tour lead in appearances, having played in the first 13 events. With eight more tournaments on the calendar, He has no intention of taking her spikes off the pedal and intends to play every event.

“The way Symetra works with the money list at the end of the year, even if I were off by a few thousand dollars because of taking a few weeks off, I’d probably wonder, ‘What if I did play in those two events?’” she says.

Though the road of a 21-event season will no doubt prove a grind, the distance shouldn’t encumber Muni He. A teenager with a pro victory already on her résumé, her independent path has already taken her this far, this fast.