Use Yoga To Improve Your Game

During a four-hour round of golf, you’re only swinging a club for a total of two minutes. What are you doing the rest of the time? Rather than thinking about the previous shank, what about taking a deep breath and channeling the mental and emotional discipline that you practice at yoga class? Wait, you’re a golfer and don’t practice yoga? Good luck, then. Using the physical practice of yoga allows golfers to let the body do what it’s been trained it to do and release any technical thoughts. This acceptance of challenge and bearing of discomfort is something that both hard-core yogis and avid golfers can relate to. The holistic training of both the mind and body while on the yoga mat is something from which all golfers can benefit. It’s popular because it works. Just ask the pros. 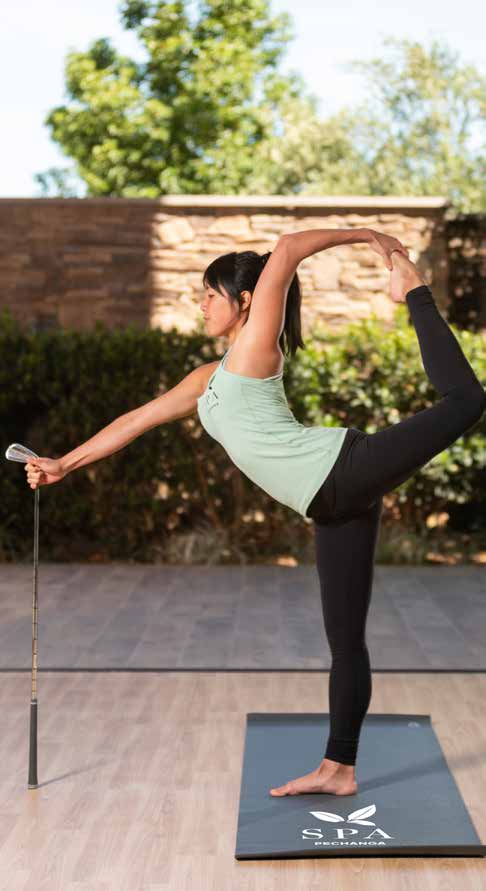 A LOCAL GIRL who grew up in Temecula Valley, Mimi Ko has seen Pechanga expand from a small casino to a full-size resort. It’s only fitting that’s she’s back in her hometown, teaching yoga at the expanded facility. Ko made a few impressive pit stops before landing at Pechanga. She graduated from Harvard University with a BA and then earned a health coaching degree at Duke University. Well traveled and well educated, Ko sees yoga as the use of an external practice to create internal change. Ko has developed a “yoga for golf” program at the resort to specifically address the biomechanics of the game. “Golfers can benefit not only from the physical but also the mental aspect of yoga,” Ko said. “Learning how to regulate emotions and being aware of how those emotions are driving performance. All of this can be enhanced and practiced through yoga.” Ko acknowledges that the frustration of golf can wear on someone’s mental state, but it’s important to stay calm and in the present, remembering to pull from the practice of your yoga. 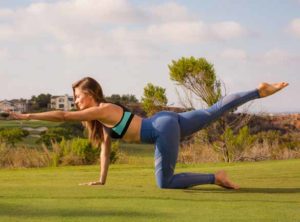 SHE’S NOT YOUR TYPICAL YOGI. First of all, she eats meat. Second, she’s originally from Russia and works a full-time job in finance for Merrill Lynch. Anastasia Desyatnik got her instructor certification in 2016 and shares her love for yoga with others when she’s not in the office. “Yoga balances my life,” said Desyatnik. “I’ve been practicing my craft for years and share my practice with everyone that I can.” Desyatnik draws parallels between golf and yoga in both the mental and physical space. Yoga improves concentration but also mental discipline. Breathing practice and technique are keys to keeping calm during times of high frustration or stress. As for the physical, flexibility and preventative practice are a given but yoga also helps to build symmetry in the body. “Everyone has a dominant side in golf,” she said. “I teach a lot of poses that strengthen the weaker side of the body or open up the side that’s being overused.” 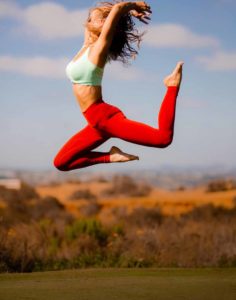 ONE MINUTE SHE’S TRYING to use up a Groupon before it expires and the next she’s off to Costa Rica to complete her yoga certification. That’s the story of Fallon Lev’s introduction to yoga. Lev acknowledges that many athletes think they are not flexible enough and therefore they tend to steer away from the yoga studio. However, the only way to become flexible is to practice. “The physical practice of yoga is preventative from an injury standpoint,” she said. “The only way for that to work is to start before problems arise. A lot of golfers wait to get into the yoga room until they’ve actually had lower back pain or want to fix something else that’s gone wrong.” Lev would like to see more golfers engage in the practice, as the things that can be achieved through breath work translate into incredible tools for the golf course. Proper breathing and positive affirmations are two simple ingredients for a sharper mind.