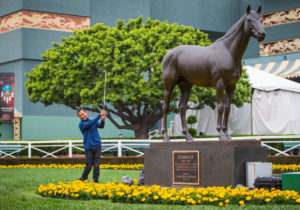 When SCGA members convene at Santa Anita Park for the “Day at the Races” event running in concert with The Preakness Stakes on Saturday, May 19, golfer attendees won’t be the only ones eyeing the park’s turf track with a thought of how a Titleist may tuft on the Bermudagrass surface.

Rather, those guiding the thoroughbreds over the sod may well share the same consideration.

Among SoCal professional sportsmen, jockeys are among the most avid of golfers.  Whether playing for skins, charity, or amid a competitive set which compliments their vocation, jocks come to the golf course with a saddle of mind and body skills refined by their day jobs.

At Santa Anita, legendary rider Corey Nakatani is well-known as the finest stick.  A single-digit player with 13 holes-in-one to his credit (including two in one round at Sierra La Verne CC, where he’s a member), the 47-year-old took up the game in his early 20s’, when hitting range balls at the former Hollywood Park.

Nakatani’s introduction to the game would soon lead to playing the Arcadia Par 3 course with fellow jocks Kent Desormeaux and Chris McCarron.

“They took money from me, and I told them they’d never do that again,” the jockey remembers.

Nakatani’s compact, powerful physique and active marble eyes evidence an intense personality.  On the golf course, the Covina-native has authored a life which, in one at least one instance, rivals the 10 Breeders Cup victories on his resume.

After maturing from his early golf days as a self-proclaimed hacker, Nakatani would go on to shoot a 58 at Azusa Greens Country Club.

“A lot of horse racing moments, you have opportunity to duplicate,” says Nakatani. “A 58 is pretty rare; everything’s got to go right.  To have a day like that was surreal.”

From one track to another, tenets which make for good rides translate across sports and fans can take their shot with betting sites online.

“There are similarities,” Nakatani continues.  “Golf is all between your ears, and if your focus isn’t there, you can forget it; you have to focus on every shot and you need get that tunnel-vision in the positive for every shot.  Same in horse racing – you need to have that focus.  Of course, you need the horse to run, but if you can channel your energy and your process, it’s just like a golf shot.”

The ability to envision a race lends itself to the skill of envisioning a shot.

“When I’m running a race, I’ve already seen the race before it happens, or what I think is going to happen,” adds Nakatani.  “And when hitting a shot, it’s a similar route for your pre-shot routine – you pick a line, you take a waggle and then visualize the shot before you hit.”

“Using your mind, and having control of your mind — it’s about thinking your way through a race, just like thinking your way around the course,” says Van Dyke, who plays often at Industry Hills GC and Glendora Oaks. “Just like reading the greens, having that sight, it translates to our job.  I’d say that the better rider you are, the better golfer you are.”

Fresh off a shocking fourth place finish upon 85-to-1 shot Instilled Regard at the Kentucky Derby in his native Louisville, Van Dyke is learning from Nakatani at work, and at play.

“He calls me A.T.M,” Van Dyke laughs of his Nakatani duels, played for $100/side. “But it makes me focus more, playing for a little money.”

The physically-fit jocks also see a host of their athletic attributes translate well to the golf course.

“A lot of jockeys pick up golf well, because we have great balance, and I think that the coordination needed for going over 40 miles an hour on a horse means you also have that hand-eye quality,” says veteran rider Joe Talamo, owner of nearly 1,900 career wins and over $96 million in race earnings.

“I think we all have strong core muscles, and a lot of jockeys, for being small, hit it really far,” says Talamo, a member at historic San Gabriel Country Club.  “I’ve played with a lot of jockeys that hit it past these big guys who are 6-foot, 240-pounds.  Using that core to get through the sweet spot of the swing really does lend itself to hitting a ball.”

Nakatani, known to bomb it off the tee, references the muscles of the lower body.

For Van Dyke, who plays twice a week and just invested in a new set of Titleist AP3 irons, it’s not about gripping the club like a baby bird.

“We have strong arms, and also very strong hands even though I know that, in golf, you’re supposed to have soft hands,” adds the young jock.

While jockeys see a few hours spent on the course as a way escape the daily din of the race track, riders don’t leave their competitive juices in the paddock.

“It’s a good getaway for us,” says Talamo.  “We all get pretty competitive out there, but that does bring out the best in you.”

A 16-handicap, Talamo smiles when revisiting his lost golf betting slips to Nakatani over the years.

“Golf is addicting, and a lot of jockeys get into it, I think, because it’s such an individual sport,” adds the Louisiana native. “In horse racing, aside from the horse, obviously, it can be kind of the same thing.  And golf just lends itself to our competitive nature because it’s such a constant challenge; which I love and hate about it, but it keeps you coming back for more.”

While Van Dyke looks at golf as a leisurely getaway day for a cigar and a cocktail, his own on-course skills find him an ascending talent away from the track as well.

In a recent charity event for jockeys at Santa Anita Golf Course, Van Dyke made his first a hole-in-one on a 193-yarder, using a 4-hybrid.

“I thought it went over the green because I saw it bounce,” Van Dyke recalls.  “But then when we walked up, there were people up there and they said they thought they heard it hit the flag; and, sure enough, the flag was at an angle.  And when I peaked in there and saw it . . . it was just so cool.”

Winning a John Deere Gator (which he subsequently sold to an owner of a horse farm) for his efforts, Van Dyke sees the shot as a singular experience when compared to his racing successes.

“It was a whole different feeling from winning a race,” adds Van Dyke, his memory of the shot vivid.  “Some people go their whole lives without a hole-in-one; really, it was unlike any other moment I’ve ever had.  Winning a race is very special, an amazing feeling; but that hole-in-one . . . I just remember walking up to the hole and wondering if the ball was really in there.”

Though he enjoys playing golf for kicks with his son, fellow riders or SoCal pros like John Mallinger, Paul Goydos or John Cook, it’s easy to see that Nakatani revels in the limelight of a sporting arena.

And like Santa Anita-based Justify primed to capture to second leg of the Triple Crown, the most driven jocks see the golf course as a stage where the sporting spotlight isn’t gifted, but instead grabbed.