Actress, singer, businesswoman and Southern California resident Cheryl Ladd has long been known as one of the most popular women on the celebrity golf circuit. Seemingly busier than ever at age 65, Ladd boasts boundless energy when promoting important causes and in pursuing her favorite pastime. We recently talked to this one-time Charlie’s Angels star about life, health and especially golf.

FORE: You once owned a 14-handicap when you were playing the celebrity circuit and pro-ams. How much golf are you playing these days?

LADD: I started a new business (Cheryl Ladd Signature Homes), I’ve actually been doing a lot of acting work and I have three grandchildren. I’m not on the golf course as much as I used to be. I thought at this age, I’d be retired and on the golf course all the time. I’m busier now than I’ve been in a long time, so that’s a good thing. I’m healthy and happy and getting some very interesting parts to play (most recently as Linell Shapiro in FX’s “American Crime Story: The People vs. OJ Simpson” and in the 2017 film, Unforgettable, where she plays Katherine Heigl’s “deliciously demented” mom), so I’m just embracing it all. I still love golf, though. I’m just so grateful that I learned the game.

Where — and when — did you learn to play golf?

I first told this story in my 2005 book, “Token Chick, a Women’s Guide to Golfing with the Boys.” It was in the early 1980s and I was in my kitchen when my husband Brian (Cheryl has been married to Brian Russell since 1981) announced out of the blue that he wanted —correction, needed — to play golf. After all, he is Scottish! We headed to the only golf course we knew, Rancho Park. The course is situated in the heart of Century City right off the main drag. Across the street is 20th Century Fox Studio, where I’d spent four years filming Charlie’s Angels (1977-1981). On the first tee with no warmup, Brian showed me how to grip the club, how to stand and how to swing. I teed up my ball, swung through and missed the ball by a country mile. I actually heard the whiff sound as my club passed in front of me. I took my stance again, gripped the club even tighter, and swung so hard and fast the momentum nearly threw me over. This was followed by three more-rapid-fire swings, each one not even coming close. Finally, Brian stepped in and made some adjustments. I took a deep breath, pulled the club back, and fired it through. Technically speaking, I crushed it. That was all I needed to be totally hooked. One shot. I was now golf’s newest life member.

Brian has been alongside throughout your many happy adventures in golf. Yet, it was a recent health issue with Brian that threatened the good times, prompting you to align with and promote a new cause. What happened and what has been the result? 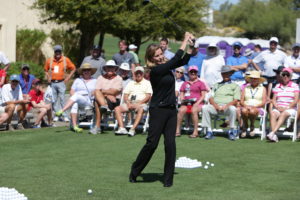 My husband was diagnosed with cataracts. I knew he was having real issues with his sight because he had asked me to drive one time and that was like a miracle, so I knew something was up. I had no idea what was ahead of us after the doctor said he had to have eye surgery. I was like, ‘WHAT?’ It turns out that the procedure takes only 10 minutes. It changed my husband’s whole attitude. He was back to being energetic. He felt youthful — he could see! I have partnered with Alcon, the global leader in eye care as part of their Get 2 Birdies campaign (http://www.get2birdies.com) to raise awareness in the golf community on the symptoms of cataracts, and how they affect your day-to-day life, as well as your golf game. Alcon’s newest procedure is a 2-in-1 treatment that can correct cataracts and astigmatism at the same time. It’s beneficial to all golfers who have cataracts. It’s almost like somebody pulls up a window shade and there’s the world!

Seeing is so important in golf, especially when it comes to looking at gorgeous courses. What’s the most beautiful course you’ve seen?

The original course at Mauna Lani on the Big Island of Hawaii, before they split it and made two courses. Part of the challenge was that it was so beautiful to look at the lava rocks and the ocean that it was hard to focus. I also love Royal Dornoch in Scotland. When we first played there, we teed off into a massive fog. The caddie says, “Alright, then, let’s go” [which Ladd says in a perfect Scottish burr]. We said, “We can’t see anything. How are we going to find the ball?” And he says, “Oh, don’t worry. I’ll find it.” We had fog, rain, sun, wind — everything but snow. It was a wonderful day. An amazing old course.

What are some of your favorite Southern California courses?

Torrey Pines in San Diego has two of the finest courses you could ever play. It’s a classic layout, filled with those trees that have nice big leaves and thick trunks and gravitational pull. Aviara in Carlsbad is one of the most beautiful places to be. It’s adjacent to the Batiquitos Lagoon, a natural wildlife paradise filled with over a hundred types of birds. The path along the lagoon is so romantic you may want to renew your wedding vows right there on the spot. Sherwood Country Club in Thousand Oaks is amazing — breathtaking. But I love the courses in Palm Springs, in Santa Barbara, all throughout L.A. One of my favorite things to do in life, still, is to be on a golf course.

Just For Her: New Technology Advances the ...