Beth Allen set for “most fun week” of her life

Beth Allen’s long campaign to play in the LPGA Tour’s Kia Classic in Carlsbad went from subtle to outrageous a year ago.

Allen is affable and easy going, and would never come off as demanding anything. But she has some close friends who are passionate about her pro golf career, and they wanted to see the Southern California native play in the tournament in her hometown of San Diego.

Allen asked tournament organizers for sponsor’s exemptions for most of the seven years the tournament existed, but there are a lot of politics that go into getting those spots, and she was politely denied.

“I understood,” Allen said. “I didn’t take it personally.”

Her friends wouldn’t let it drop without a fight, and Mike Lewis, who is savvy in marketing, got a campaign going with the clever hashtag #drivebethtokia. In one hilarious tweet, Beth’s face was superimposed over that of Los Angeles Clippers star Blake Griffin while he’s dunking over one of Kia’s cars at the NBA All-Star Game.

Some of those social media postings are coming up as anniversary reminders now, and Allen can look at each one of them and smile. She didn’t need an exemption to get into the Kia Classic this year. She earned it. 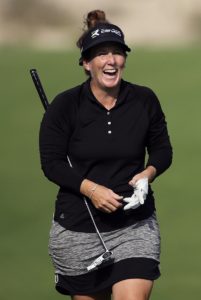 After becoming the first American ever to win the Order of Merit on the Ladies European Tour in 2016, Allen went to LPGA Tour Qualifying School and tied for sixth to earn her full-time card to play in the U.S. for the first time since 2008.

Of course, one of her first thoughts upon completing the Q-School grind was that she’d get to play in the Kia, which will be contested March 23-26 at the Park Hyatt Aviara in Carlsbad, with world No. 1 Lydia Ko as the defending champion.
“I’ve wanted to play in the Kia so badly,” Allen said.

“I know it sounds like a lot of pressure, and it kind of is. But at the same time, I’m now really good at reminding myself to enjoy myself. This is going to be one of the most fun weeks of my life. I know it. All my friends will be there, and I’m sure they’re going to be doing something ridiculous – wearing funny shirts, being loud and drunk and hilarious. I hope they are.”

A week after the Kia, Allen will play in the only LPGA major in which she hasn’t already competed – the ANA Inspiration in Rancho Mirage. The former Dinah Shore Nabisco Championship is special to Allen because it’s the first tournament she attended. She saved a little “Dinah Shore” T-shirt from the experience.

Allen is set to split time this season between the LPGA and LET. In Europe, she is on the players’ board and has happily settled in Edinburgh over the past eight years. She got married last summer in Glasgow.

After scoring her breakthrough victory in 2015, Allen won twice last season and had five top-3 finishes. In back-to-back weeks, she scored victories in France and Abu Dhabi, and recorded a 64 in each of the events.

By the end of the summer, ESPN had dubbed Allen “the best American player you’ve never heard of.”

“Definitely the best year of my life,” Allen said.

At 35, Allen is most definitely a late bloomer in golf, and her story is one of the sport’s most heartening in recent memory. Her journey includes donating a kidney to her brother, Dan, in 2011.

Allen grew up in Ojai and didn’t play golf until she was 15, despite her father, Jim, being a teaching pro. She got good quickly playing in Ventura and Santa Barbara junior golf events, and landed at Northridge for her college career.

Her family moved to San Diego, where Jim Allen was the city golf manager at Torrey Pines before he died of cancer in 2006. Beth worked at Torrey Pines and prepared for her pro career there.

“I was always a muni girl at heart,” Allen said.

Still relatively inexperienced when she first made it onto the LPGA Tour in 2005, Allen would struggle to establish herself, scraping by for four years. She laughed recently when she noted that check she earned ($28,867) for a tie for seventh in February’s Women’s Australian Open was not much less than her entire previous LPGA earnings ($42,501).

Recovering emotionally from the loss of her father, and looking for a change of scenery and outlook, Allen decided to give the LET a try in 2009.

“I thought I might as well take a chance,” Allen said. “See a bit of the world. I wasn’t sure how much golf I’d be playing in the future. Europe changed my life.”

The players enjoyed the company of the outgoing American as they traveled to far-flung locales in Morocco, Turkey, India and China. Allen was making friends and making a living, though she couldn’t break through with a victory.

Then in 2011, Allen got a taste of life perspective. Her brother, Dan, suffered from a kidney disease and in 1999 received a transplant. Twelve years later, he was in need of another one, spending 12-hour days in dialysis. Doctors determined that Beth was a match for Dan, and one of her kidneys was transplanted to him in March of ’11.

Dan described the emotions of his sister’s gift as “beyond words.”

It would be four more years before Allen got her first LET win, and it came in remarkable fashion. Five shots behind when the final round began in the Ladies European Masters in England, Allen stormed back to win a tournament that she’d blown three years earlier by suffering a triple bogey down the stretch.

Probably not of coincidence, Allen had a new caddie that week – former LPGA Tour and Solheim Cup player Sophie Gustafson, who had agreed over beers one day to be Allen’s caddie after deciding to take a break from playing.

“She obviously brings a lot to the table,” Allen said.

Gustafson continues to be on Allen’s bag, though since she resides in Sweden her time caddying in America this season will be limited.

“She said she’ll do the good ones,” Allen said with a smile. “She’s doing Phoenix, Kia, ANA and Hawaii, of course. And we’ll just go from there.”

It took time and patience, but all areas of Allen’s life seem to have met into a hard-won sweet spot of happiness.

“I’ve taken the road less traveled – or never traveled by an American,” Allen said, “and I wouldn’t change anything about it.”