Jamie Puterbaugh, a former San Diego State player who has become a golf teacher, has a student from his alma mater’s women’s team.

She is 5 feet, 4 inches tall and obviously skilled enough to play at the NCAA Division I level. She was fit for her clubs by a major golf company, yet Puterbaugh says she was swinging with shafts that might normally be put in the hands of a 6-foot man.

So it was no wonder that when Puterbaugh put her on the newest form of swing analysis from Gears Golf, it showed she was hitting nearly every shot near the neck of the club. In essence, the golfer was succeeding despite her clubs.

“It was, like, are you kidding me?” Puterbaugh said with good-natured exasperation.

The fix was shockingly easy. Puterbaugh reduced the clubs by an inch, “and now she can hit the sweet spot pretty much on command.”

The story illustrates what the majority of recreational golfers face: If a college player can have poorly fit clubs, imagine what it’s like to try to play any semblance of quality golf with sticks off the rack that very likely don’t match your swing.

“It’s insane,” Puterbaugh said. “It’s a really hard game. It’s a game of precision and a game of misses. If you club isn’t fitting, the misses can be pretty demoralizing.

“Don’t get me wrong. You have to know how to do some basic movements in the golf swing. But there are plenty of times when you see someone fighting a golf club and they don’t know it.
Puterbaugh believes the solutions for that are better than they’ve ever been.

Swing analysis was advanced considerably more than a decade ago with the debut of TaylorMade’s MATT system, which used the motion-capture technology of movie making to record swings. Now comes Gears, which has fine-tuned the process while also producing greater analysis of how the club – not just the golfer — is performing during every millimeter of the swing.

“An MRI for your golf game” is what Golf Digest said of Gears when it debuted in 2014. 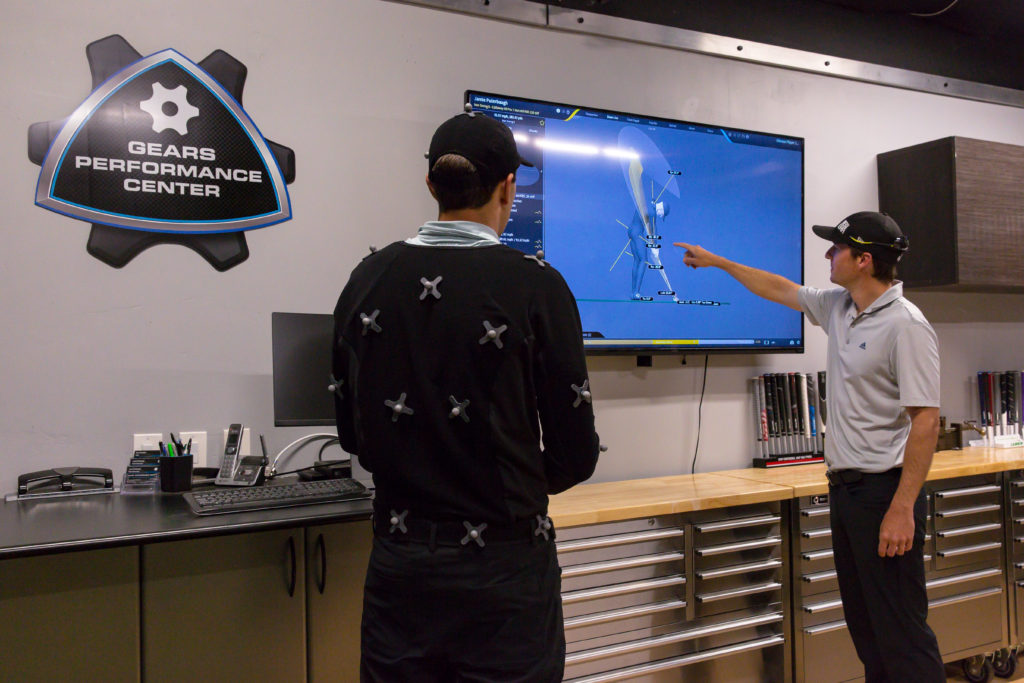 The Aviara Golf Academy in Carlsbad, owned by Jamie’s dad – perennial Golf Magazine Top 100 teacher Kip Puterbaugh – was one of the first users of the MATT, and it’s now the first public academy in California to be using Gears.

The Puterbaughs invested in the system – which retails for nearly $40,000 — eight months ago and revamped the teaching bays at Aviara to create what looks and feels like an entirely new fitting experience.

No longer are golfers limited to accepting one brand during a fitting. At Aviara, they can choose from six companies — TaylorMade, Callaway, Titleist, Ping, Mizuno and PXG. There are dozens of graphite shafts from which to choose from among makers Fujikura, Oban, Mitsubishi and Aldila. The steel shafts are from KBS and Nippon.

Using clubheads that allow for interchangeable shafts, a club fitter at Aviara can have a golfer test every club brand, with a shaft specific to his specs, within a matter of minutes.
“We’ve been very brand agnostic,” Puterbaugh said. “We let the customer make up their mind. We want to put every club in front of them to see what they can do.”

The lead club fitter at Aviara is Peter Campbell, a teammate of Puberbaugh’s when they played at La Costa Canyon High in Carlsbad. Campbell played at UCLA and on pro tours before getting into the fitting business.

One of the key elements of the swing caught on Gears is shaft deflection, Jamie Puterbaugh said. At three key points in the swing, the shaft bows or “droops”: takeaway, loading at the top of the swing, and the downswing. The right amount of flex at each point springs the clubhead into the ball for ideal distance and accuracy.

The challenge for a club fitter is to find the right weight and flex in a shaft at not only the tip, but also the butt end.

Kip Puterbaugh has been teaching golf for more than 40 years, and he had an eye-opening experience when Campbell got on the system. With his previously fitted clubs, Campbell had a tendency to flip his hands at impact and launch the ball too high. Then they tested him with lighter Nippon shafts. The flip disappeared and his ball flight was lowered by 15 percent.
The shaft switch gave Campbell a better swing without any effort on his part to make it happen.

“That blew my frickin’ mind!” Kip Puterbaugh said with a laugh. “That opened my eyes to club fitting in a way I wasn’t familiar with.”