Fountain Valley native Lilia Vu likes to write down her goals. After a scorching 2021 season, her competition may not want to see what she’s penned in for the year ahead. After nearly two years in golf’s dark place, the 24-year-old Vu returned the from the game’s depths to author a three-win season on the 2021 Symetra Tour.

For the victor of the SCGA Women’s Am Championship in 2016, two-time UCLA All-American and former No. 1 amateur in the world (31 total weeks), the superb Symetra showing put Vu back where her talent undoubtedly belongs — on the LPGA Tour.

Long regarded for a stellar short game, Vu attributes her ability to find the winner’s circle to her SCGA Am victory.

“That win honestly kick-started all my college wins,” recalls Vu. “I didn’t really win in junior golf — no AJGA Invitational wins. So that was my first actual moment where I won a tournament. That SCGA Am meant a lot. I learned what winning felt like.”

Segueing from a three-year Bruins career — which saw her capture a school-record eight wins — to suddenly playing among the world’s best, however, proved a rude awakening.

“When I got out of UCLA as the top amateur, got my card through Q-Series and then went straight to the LPGA, I thought it was going to be like college, where it was super fun and everybody is having a good time,” recalls Vu of the 2019 sea-son. “But I put a lot of pressure on myself; didn’t feel like I belonged. I had this glamorized view of the LPGA, but it’s tough out there.”

A 1-for-9 LPGA cut-line was evidence of the descent, as was an 0-for-2 on the Symetra later that year.

“I was scared off the tee,” continues Vu. “All the confidence I ever had — gone. I’d set up to the ball … and didn’t know where it was going. It was like I was starting from scratch.

Heading into the 2020 season, Vu actually considered hanging up the spikes and going to law school.

“And then COVID hit,” she says. “It gave me time to take a break from golf, to just chip in the backyard for two months. That’s all I did.”

A RETURN TO FORM

Once the Symetra schedule returned in the summer of ‘20, Vu played a season of seven events and made three cuts, albeit with nary a top-25 showing. During that seesaw season, Vu, an avid reader, often traded yardage books for golf books; Fred Shoemaker’s Extraordinary Golf was one read that made a particular impression.

“One thing that really resonated with me in that book is that when you have a certain miss, don’t try and overcorrect it because then you’ll have two misses,” Vu explains. “If you keep playing your miss and find the flight that you want, that’s honestly how I fixed my game.”

“I changed my outlook, because I felt like I was really in a hopeless place with my game,” she says. “I felt like all the talent, the hard work, the achievements…I lost all of that. I mean, I was making up-and-downs for bogey. So I just tried to start having fun again; that’s when I play my best golf, and I think most people can attest to that.”

At the onset of the ‘21 Symetra season, Vu found both her swing and her purview rounding back into game shape.

“At the beginning of this year I wrote down my goals. And my top goal this year was to win three events on the Symetra,” she smiles. 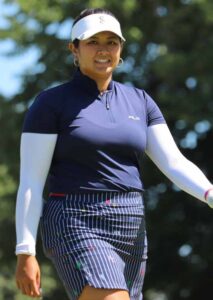 Playing in 18 events, Vu had a Symetra season for the ages. After a measured March start, she set sail the following month and never looked back. After a pair of April top-10s, she grabbed her first pro victory at the Garden City Classic in Kansas, authoring a 1-shot win over Diamond Bar’s Beth Wu.

“I was grateful to be out there,” she says. “I was having the most fun I’ve ever had. And I just felt very free.”

Following a pair of top-5 showings at the onset of July, Vu took home victory number two at the Twin Bridges Championship (in Albany, New York) in July.

“It was longer than what we usually play, and a really narrow course,” she says. “I was 3-over through my first five holes in the event, but I somehow managed to shoot 1-under in that round. And when I won that event, that’s when everything changed for me. Everybody regarded that course (Pinehaven CC) as an LPGA-style course, and I think my game was ready for it.”

Vu’s sterling summer continued with a T-2 at her next event, the FireKeepers Casino Hotel Championship, before she went on to win her third title of the year at the Four Winds Invitational in South Bend, Indiana.

En route to winning the Symetra’s “Race to the Card” money list title and reacquiring her LPGA status for 2022, Vu ultimately made 16 cuts and recorded 10 top-10s among her trio of victories.

“I feel like I’ve grown up a lot; I’m clear on my goals,” Vu says. “And, along with gaining more confidence, I feel like I know my game better than ever. So I do think those bad years happened for a reason. Those moments led to now.”

And as for writing down the list of goals for her LPGA return?

“I still need to think about them a bit deeper,” Vu concludes. “Generally, any goal that I write down, I achieve. So, I want to be very precise with my list.”