Many resorts boast of offering “championship” golf, but at the Omni La Costa Resort & Spa in Carlsbad, the word has veracity. Everyone from Jack Nicklaus to Tiger Woods has competed on the two recently renovated courses here.

And though the legacy of tournament golf and renowned players is prominent — after all, the courses are named Legends and Champions — La Costa these days focuses intently on the resort golfer who enjoys testing his or her game where the professionals have played, while also offering programs for those who are seriously looking to improve their games.

Among La Costa’s game-improvement offerings:
▪ RoboGolfPro, a robotic swing trainer that is offered by director of instruction A.J. Avoli. There are only a handful of these in the country, and the only other resort in California that has one is Pebble Beach.
▪ Fitness and flexibility training by Roger Fredericks, who has worked for decades with numerous tour professionals.
▪ True Spec club fitting is a new offering that uses interchangeable shaft and clubheads from numerous manufacturers, along with Trackman, to produce the best setup for a golfer.

Basically, if you can’t get better at golf on a visit to La Costa, you’re not really trying.

“I think we have such a cool and comprehensive package that doesn’t exist at a lot of other places. For us, it’s really exciting,” said Dustin Irwin, La Costa’s director of golf.

ROBOT-AIDED SWING
In the age of driverless cars, it was bound to come to this: golf instruction by robot. PGA instructor Scot Nei developed the RoboGolfPro as a way for players to be able to get the feel of a fundamentally sound swing.

Avoli, who has worked at La Costa for six years, has been among RoboGolfPro’s most fervent believers, and regularly incorporates it into his instruction.

“Most people learn by feel,” he said. “The hardest thing in the world is to change a motor pattern. That’s why I feel like I have an advantage with this because I can help you change much faster.”

Avoli raised his hand and swears that he can get a 15-handicapper who badly slices the ball to hit a draw by the end of one session.

He said that’s exactly what he and Nei did with New England Patriots head coach Bill Belichick a few years ago while he was playing in the AT&T Pebble Beach National Pro-Am. Instructor Hank Haney was so impressed with the results that he had them on his radio show.

“That’s when he said, ‘Man, there is something to this,’” Avoli said with a smile.

After Avoli interviews clients and watches them hit on the range, he sets them up on the robot. The machine is a bit intimidating at first glance, but is easy to use. The robot’s “arms” hold the shaft of a fixed club, and the golfer takes a standard grip and stance.

“Then I build a swing for them,” Avoli said. “It’s based on flexibility and range of motion. There is no one-sizefits-all. We work with something that they’ll be physically able to do.”

Avoli enters the parameters he believes suit the client’s faults, and the swinging begins, very slowly at first, then building up speed so the golfer begins to get the feel. Most golfers,
Avoli says, are going to feel that an on-plane swing is very different from what they’ve been doing.

“People will say, ‘Wow, so that’s what it feels like,’” Avoli says. “And then they see that they can do it. A lot of people say they can’t physically do it, but there is a swing that will work for you and your body, and we’ll find that.”

Roughly 50 percent of his clients come from the resort, while the rest are locals and members. Avoli charges $200 for instruction and an additional $75 to work on the RoboGolfPro. Bundle pricing is available for multiple lessons.

FINDING FLEXIBILITY
Roger Fredericks got a huge boost in his stature more than a decade ago when one golfer became a very big fan of his work: Arnold Palmer.

Fredericks worked with Palmer on his flexibility, and “The King” reportedly gained nearly 30 yards on his drives. So thrilled was Palmer that he eventually did an infomercial with Fredericks that became one of the most popular on the Golf Channel at the time.

To this day, Fredericks continues to employ the same methods and instruction with students at La Costa. In a three-hour session, with a cost of $395, Fredericks first spends time with a golfer
on the range to gauge swing and body motion, moves inside to analyze the video, and then works on posture and flexibility.

Mandatory for a good golf swing, Fredericks believes, is upper-body flexibility and strong legs, and most people don’t have these because they sit all day. “In every session there is what I call the ‘magic moment,’” Fredericks says. “That’s when somebody said, ‘Wow, so that’s why I do that!’”

At the end, Fredericks devises a custom-tailored flexibility program and a video of stretches to perform.

“You don’t have to work out like an NFL football player to get in good shape,” Fredericks said. “If you follow a proper flexibility protocol and do a little bit every day, you’ll be healthy and fit in ways you never imagined.”

GETTING THE RIGHT FIT 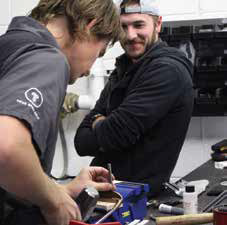 Steve Ziff, a club fitter for nearly two decades, sees it all the time. A high percentage of golfers buy their clubs off the rack and basically play a guessing game that they actually got something that suits them.

Enter Ziff and True Spec Golf. In a small, airy trailer on the La Costa range, Ziff has access to 30,000 shaft and clubhead combinations. Graphite shafts from about 15 companies line the wall, and Ziff pulls open drawers to reveal iron and driver heads from all the well-known companies.

True Spec considers itself “brand agnostic,” so Ziff’s job is to find the combination that maximizes performance.

“Somebody might come in with an expectation that they want to use a certain product,” Ziff said. “We’ll put that into the mix, but I’ll want to look outside the box. We’re turning over stones. There might be something that the golfer didn’t even think about when he walked in, and it’s night and day compared to where he was.”

Ziff generally measures performance with three Trackman variables: ball speed, launch angle and backspin. He gets an initial measurement, and then begins working with combinations. He welcomes players bringing their own drivers to use for comparison.

“You look at where we’re starting and what the numbers are, and say, ‘OK, what can we do to improve?’” Ziff said. “Most people don’t come in perfect. Not even elite players are perfect. I’ve worked with some who have made a lot of money, and it’s a little scary to think of what would happen if they got better.”

The fitting rates range from $350 for a full bag to $125 for individual clubs. 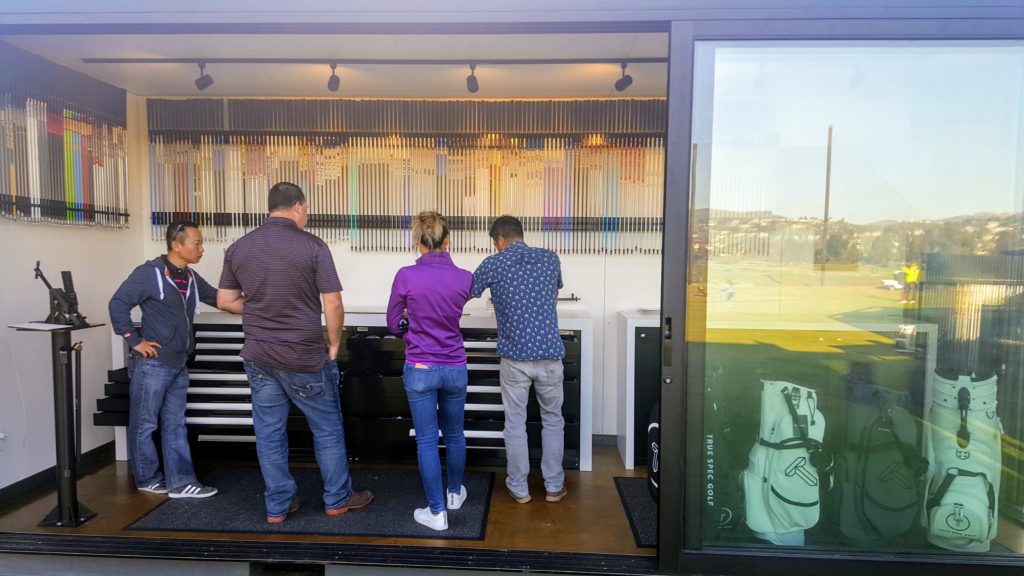