While the golf world readies for this summer’s 150th playing of The Open Championship at historic
St Andrews, another anniversary swings a bit closer to home.

With equal parts purpose and persistence, PGA WEST nears four decades of play as “The Western Home of Golf in America.” Perched beside the Santa Rosa Mountains in the Coachella Valley golf nexus of La Quinta, the development, through up and downs, has never strayed from the bold vision held by the property’s original developers.

That’s how many golf holes are owned and operated across the diverse nine-course development, marking the property and portfolio as one of the largest golf locales in the country.

When developers Ernie Vossler and Joe Walser, Jr. of Landmark Land Co. debuted PGA WEST amid the 1980s golf and real estate boom, the project could aptly have been described as somewhere between ambitious … and downright deranged.

For context: The sandy-soiled farmland was, at the time, basically in the middle of nowhere, even by SoCal desert standards. Earmarked alone by the nearby, historic La Quinta Resort, which debuted in 1926 and for which the eponymous city was named, La Quinta had only been incorporated (with around 3,000 residents) a mere four years earlier.

In the late 1970s, Landmark had purchased La Quinta Resort and in 1980 and ’81 debuted
a pair of courses created by burgeoning architect Pete Dye: The Mountain Course and The Dunes Course.

In 1986, Dye’s Stadium Course at PGA WEST opened, a project for which Dye had received substantial input from his better half, Alice Dye, regarded in her own right as the “First Lady” of golf architecture.

Nationally recognized for its bold combination of ingenuity, difficulty and the manipulation of once-plain terrain, Dye himself later said of the Stadium project: “The worst piece of land I started with was this featureless, barren acreage.”

Despite its nascence, the course gained instant recognition, if not infamy, opening with the highest Course Rating™ ever bestowed (77.1).

“They wanted, as the famous saying goes, ‘The hardest damn golf course in the world,’” says Donald Zauner, Jr., resort general manager at PGA WEST. “And they pushed Pete for that.”

Initially slated as host of the 1991 Ryder Cup (which would be moved to Dye’s Kiawah Island course due to time zone considerations), the infant Stadium would quickly play home to the Skins Game in 1986, and then the PGA Tour’s Bob Hope Chrysler Classic the year following.

“It is mindboggling,” Zauner says. “Just recently, I was walking through the Tournament Clubhouse and looking at an old photo of the Stadium Course, when nothing else was yet here. It’s just amazing to look back
at what the property was in the 1980s and what it is today.”

To wit: Crossing the Jefferson Street threshold into PGA WEST today is to envelop oneself in the largest golf and residential community in the ever-growing Coachella Valley. Inside the 2,200-acre spread of PGA WEST are thousands of residents,
a sprawling Sports Complex and five courses, including the Stadium Course, the Arnold Palmer Private Course, the Jack Nicklaus Private and Tournament Courses and the Tom Weiskopf Private Course.

Outside the confines, in addition to the Mountain and Dunes Courses at La Quinta Resort, the property’s umbrella ownership also includes the members-only Pete Dye Private Citrus Course and the Greg Norman Course.

“Pete Dye, of course, built courses before Stadium and many, many after,” says Zauner. “But this is the course he built where he really found his niche, so to speak. What he did here, what he learned here, his staples — he put those skills into all his work moving forward. This is the first Pete Dye course where he really expressed himself.”

Such expression, of course, found instant fame and infamy.

In 1987, after its Hope debut (and a win by Corey Pavin), a player boycott would take the PGA Tour event away from the Stadium and back to a more benign rotation of area tracks. It would return in 2016 as part of today’s American Express, but PGA WEST remained part of the event throughout, with the Palmer Course — famed for David Duval’s 59 in 1999 — playing host from 1988-1994 and again from 1998-2015; and the Nicklaus Private included from 2009-2015. Additionally, the Stadium and Nicklaus Tournament courses played host to the Tour’s final stage of its former Q-School every other year from 1986 until 2012.

“Having the Tour here every year with the American Express, it really helps us stay in front of people, to be the showcase for the golf world that week,” Zauner says. “When you see great players hitting shots on the Stadium, it creates a goal for golfers to come here, a ‘bucket list’ course.”

And while today’s better fit, better-equipped pros have found more ease on Stadium than their 1987 counterparts (the course charted as the sixth easiest on Tour in 2020), the grounds maintain ample muscle for most eager amateurs.

“The course hasn’t changed all that much over the years,” says Chris Caballero, director of golf at PGA WEST’s Tournament Clubhouse. “If we wanted, we could set up the course to where Tour guys are shooting 75. But with the pro-am feature, we need to walk that fine line where it’s a little difficult for the pros but not impossible for the amateurs.”

“Our starters have a talk with guests and let them know about target golf … a lot of players, of course, want to hit driver everywhere,” says Caballero. “As long as you’re playing the proper tees, you don’t need to always grab the driver on Stadium. Sure, over the course of the round, you might need to pitch out a few times and most players take their lumps; once the Stadium gets you, things can unravel quickly. It’s tricky; a mental test. You can be in the fairway all day and still not have a level lie.”

Sporting character throughout, the Stadium makes its biggest statement after rounding toward home. With its formidable, 20-foot-deep greenside bunker, the par-5 16th (“San Andreas Fault”) hasn’t gone benign over time, just as the water-laden home hole — defined by its wet hazard left and run of awkward mounds/bunkering on the right — still requires a studied tee shot to avoid a double-bogey finish. 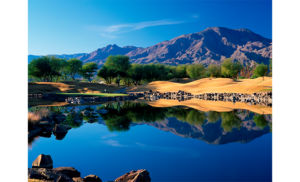 And, of course, Stadium’s penultimate hole, the island green at 17 (“Alcatraz”) maintains its status as the most famous par-3 in Southern California. Initially renowned for Lee Trevino’s hole-in-one during the 1987 Skins Game (with Vin Scully on the call) and later acclaimed for Jason Dufner’s rocky “escape” chip en route to winning the AMEX in 2016, the sister hole of Dye’s island 17th on TPC Sawgrass is as iconic (and nerve-racking) as the day it debuted.

And for future PGA WEST guests, an upcoming, two-year Stadium renovation plan (beginning this summer) will return the course to Dye’s original intentions. Under the guidance of longtime Dye understudy Tim Liddy, and working in conjunction with the PGA of America, the project follows a recent greens rework of the Nicklaus Tournament Course.

“We’ll be redoing the greens, some strategic tree removal, the bunker complexes, some turf areas and some other subtle things; getting it back to the original design vision and what Pete intended it to be,” Zauner explains. “Just as an example: Pete Dye never flashed a bunker; over time, with sand getting thrown around, you might see that here now. So, we’ll return those to flat-bottom bunkers.”

Zauner says that Liddy’s knowledge of the course and of Dye’s intentions make him the perfect person for the renovation.

“All of the mounding is here for a reason, and that mounding mirrors the mountains,” continues the resort GM. “Every single hole, there’s a reason the hole is shaped the way it is. Say you’re in a seemingly perfect spot in the fairway, but you’re on the left side and you can’t see the pin — that’s because Pete didn’t want you to; he wanted you on the right side of the fairway. There were two or three people who shaped all the mounds, and just by looking at them, Tim can tell who shaped which mounds.”

From Dye’s eye to Landmark’s bold legacy to the PGA Tour’s annual return, such emphasis on detail continues to define these grounds. Born of former farmland into one of the nation’s largest golf communities, the PGA WEST front mat displays the same phrase as it did upon its mid-’80s debut: Upon reaching the entryway, eyeing the mountain-framed logo and slipping on his or her spikes, the golfer is indeed “Home.”