Topgolf Comes to El Segundo, Transforms into an Entertainment Destination

Just how appealing the current makeover of The Lakes at El Segundo sounds to you probably depends on whether you fancy playing Angry Birds from your driving range bay — smashing down electronic structures and fending off flying pigs — or whether you’re the “just give me a bucket of balls” type. It depends on whether you’re enticed by electronic wizardry that lets you go mano-a-mano with a group of pals in electronic games of skill, chipping microchipped balls to targets or playing closest-to-the-hole on cyber doppelgangers of internationally famous golf courses while club music thrums in the background … or whether you’d just as soon work on your game in peace. Bucket of balls? Or play virtual St Andrews from your driving-range bay?

Topgolf and the city of El Segundo are betting you’ll be seduced by the wonders of Topgolf’s technology to the extent that you’ll want to come out with a gang of pals, book a bachelor or bachelorette party, hold a corporate teambuilding junket and rock out. The driving range at El Segundo’s once-sleepy municipal nine-holer will not only become an electronic golf arcade with an array of games to play, it’ll also be fueled by abundant drinks, burgers, bar snacks and pulsating music.

Did we mention that there will still be a golf course? The beloved Lakes nine-holer is getting its own makeover, and traditionalists will still be able to go out and hit golf balls off grassy tees to distant pins on smooth greens. Local schools and junior programs will still be able to access the facility at substantially reduced rates and new practice putting greens and short-game areas will be added.

That’s all largely due to local voices and the Southern California Golf Association. As SCGA Director of Governmental Affairs Craig Kessler puts it, “Credit the golf community. They insisted Topgolf be faithful to the message that Topgolf is committed to supporting and growing the game of golf. That’s how they got the result: a long-term deal to maintain the course and improve the facility and clubhouse.”

So happily, the course is still a course. But don’t be surprised if you find yourself enticed by Topgolf’s whizbang wonders. The golf-as-entertainment company has become an international juggernaut, with locations coast to coast in the U.S. and venues in the U.K., Australia, Germany, Mexico and the United Arab Emirates, with China, no surprise, on the horizon. Angry Birds–style golf has wings.

Until now, every Topgolf franchise has been limited to the futuristic driving range-cum-bar/restaurant formula. El Segundo represents the company’s first foray into nonvirtual golf. It’s a more golf-centric model that the SCGA endorses, versus the purely entertainment-driven model that might have emerged without golf voices speaking up loudly and clearly.
And largely due to those voices, the course, which some felt was underperforming, is in the process of getting totally relandscaped.

“It was a course in disarray,” says El Segundo City Manager Scott Mitnick. “Usership was dropping. It was underperforming.”

Enter Topgolf, dangling a $1.9 million annual obligation that will go straight to the city’s general fund, assuming there are revenues. That’s pretty hard for a small city to resist. Will there indeed be revenues? Considering that Topgolf is investing $40 mil-lion-plus into the 100-bay driving range alone indicates that the company sees a rosy future for its new South Bay venue. Enough so that the company ultimately decided to overhaul The Lakes, while turning course operations over to the experienced hands at Indigo Golf Partners, the largest golf management company in the nation.

NEW BLOOD TO THE GAME

The Topgolf formula is largely based on its claim to draw nongolfers and new golfers to the game by making a day at the course an entertainment option, a party possibility.

“Since its inception, Topgolf‘s foundation has been built on innovation, fun and inclusivity,” the company states in a press release. “As pioneers of the sports and entertainment industry, Topgolf’s track record of creativity and industry leadership has led to the growth of a unique company credited with growing the game of golf through dynamic in-person, virtual and digital experiences.”

A so-called “chef-driven” menu, hand-crafted cocktails, music and event spaces are also all part of the formula. 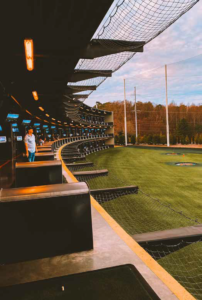 In the words of one fellow quoted in a Topgolf promo video, “You don’t have to be good at golf. The environment’s great. You meet a lot of people. People come in here who haven’t golfed before, and they learn how to golf.”

That’s none other than the Angels’ Mike Trout speaking. The company clearly targets millennials, with its emphasis on portraying people laughing, drinking, high-fiving and clearly having the time of their lives, while also swinging a club or two.

The El Segundo project has been in the works for nearly nine years.

“Early on,” admits Mitnick, “there was an element (of local golfers) that wanted to keep it exactly as it was. They were concerned it would become purely a party destination. But it was a new concept at the time. As time went by, they saw how beneficial it will be.”

The Lakes will continue to offer preferred rates to those locals (“That’s baked in,” assures Mitnick), and to host its well-established junior and school programs.