Rustic Canyon is “old soul” golf at its finest

As the 20th century came to a close, new golf course construction was exploding. For many purists, however, golf course architecture was headed in the wrong direction. Fueling the new course boom was real estate sales, which meant that difficulty and eye-candy appeal for tours, brochures and course rankings often outweighed course strategy, walkability and playability.

The companions of these upscale real estate courses were the stand-alone, country-club-for-a-day public spreads that were both expensive and also typically guilty of design excess. By the late 1990s, a minimalist movement had emerged that tried to flash a red light at these over-the-top tracks, but the handful of courses it produced, while undeniably admirable, were so remote that they were accessible only by private plane or a day-long car ride. Think Bandon Dunes along a distant stretch of the Oregon coast. Then came “the Moorpark Miracle” — Rustic Canyon Golf Course — which changed the possibilities of modern architecture forever. When it opened in 2002, Rustic Canyon proved that classic, Golden Age design virtues could be grafted onto a value-priced public golf course within an easy drive of a major metropolis.

Located 45 minutes northwest of Los Angeles in Ventura County, Rustic Canyon is a remarkable throwback layout that emphasizes thinking, placement and the use of proper angles, thanks to firm, fast conditions, wide, sagebrush-framed fairways and bunkers, and barrancas that cut in at just the right places. It engages at every turn, thanks to an easy-to-walk routing with tremendous variety that allows for run-up shots galore. At first glance, it’s so low-profile that it’s hard to believe that it could be such a compelling test, but play it once and you’re hooked. Geoff Shackelford, a golf journalist and architecture scholar who co-designed Rustic Canyon with Gil Hanse and Jim Wagner, noted that none of the other courses being built at the time were doing that. 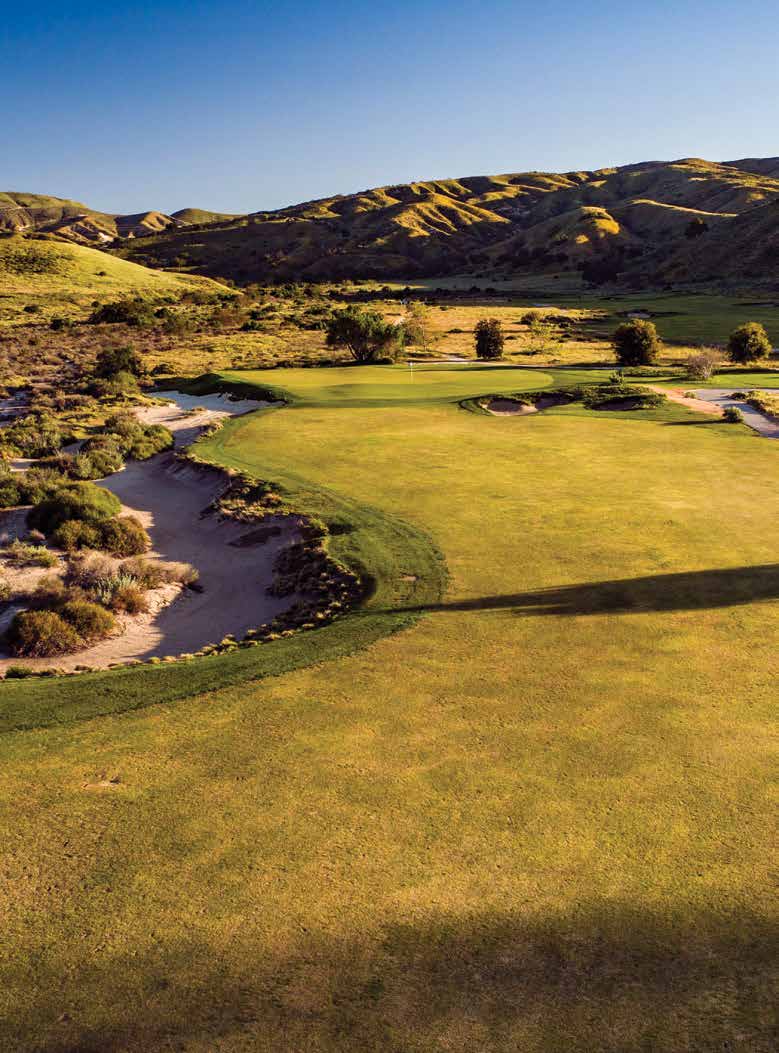 “We faced a lot of skepticism,” said Shackelford to the SCGA’s Jonathan Coe in a February 2021 Quarantine Chronicles podcast (listen at scga.org/podcast.)

“We got away with doing things that weren’t normal anymore in golf architecture, with some very close green-to-tee walks, little pot bunkers, and wide fairways. People have really come to embrace (what we accomplished) and embraced the fact that we tried to make it fun.” Soon after the course opened, Shackelford spoke to the strategy and playability at Rustic Canyon and how the course differed from many of its contemporaries. “Too many of the courses built these days force the player to hit a particular type of shot,” he said. “Our goal with Rustic Canyon was to give players a chance to decide how they want to attack a hole. We have a lot of greens that allow a player to run the ball into the green, rather than simply forcing them to hit a high wedge shot.”

Laid out within a 300-acre canyon, the 7,044-yard, par-72 course traverses flatter if rumpled ground on the front nine, then hikes into the higher, more demanding holes on the back. Somewhat surprisingly, for a course that looks mostly level, there’s 243 feet of elevation change during the round, which produces excellent variety. A dry, natural sandy wash bisects the property, forming part of the aesthetic and strategic appeal. “We had the dry wash and the barranca that runs through the middle — which was environmentally protected — so we had to stay away from it,” Hanse told The Morning Read in 2017. “But we also tried to utilize it and figure out ways where we could make it an interesting part of play, a la Riviera or The LACC. We utilized the barranca as an interesting hazard instead of a penal one that you’re constantly having to play over and over and over. We mixed it up. Sometimes it’s lateral, sometimes it’s cross, sometimes it’s not even in play or it’s so far out of play.”

JOY RIDE FRONT TO BACK

Indeed, Rustic Canyon is a joyride from the opening tee shot, where a 70-yard-wide fairway welcomes. It’s nearly impossible to miss — but then the fun starts. A narrow, sandy-bottom, ditch-like barranca slashes the fairway’s left side, about 145 yards from the green, then twists on a diagonal, cutting in front-right of the green. Are you ready to gamble so early in the round? If so, a potential eagle awaits.

The 315-yard, par-4 third tempts with multiple options. Bold bashers can chase a drive onto the green, yet there’s also risk/reward fun for the lay-up golfer. The split fairway provides a safe right side, but bunkers and a semi-obscured green that falls away toward a back bunker demand a precise approach. The

successful riskier tee shot up the left side is rewarded with an open pitch to a more receptively angled green.

Variations on this theme, the strategy-infused short par-4, arrive again at the 362-yard seventh and the 336-yard 12th. Green surrounds are closely mown, allowing the golfer several recovery shot choices. However, the dilemma at the 582-yard, par-5 13th is the green itself, which is kidney bean-shaped, with a steep-lipped bunker that noses into the front-middle. If your ball winds up on one side of the green and the hole is cut on the other, dare you risk hitting a wedge while on the putting surface? Yet another memorable hole pops up at the dogleg-left 14th, scary-sounding at 498 yards and scary-looking with
a scrub-filled wash providing visual intimidation on the tee shot. It’s roomier than it looks, however, and an approach hit short-right may well tumble some 20 yards down a hill onto the green.

“Our goal with Rustic Canyon was to give players a chance to decide how they want to attack a hole. We have a lot of greens that allow a player to run the ball into the green, rather than simply forcing them to hit a high wedge shot.” 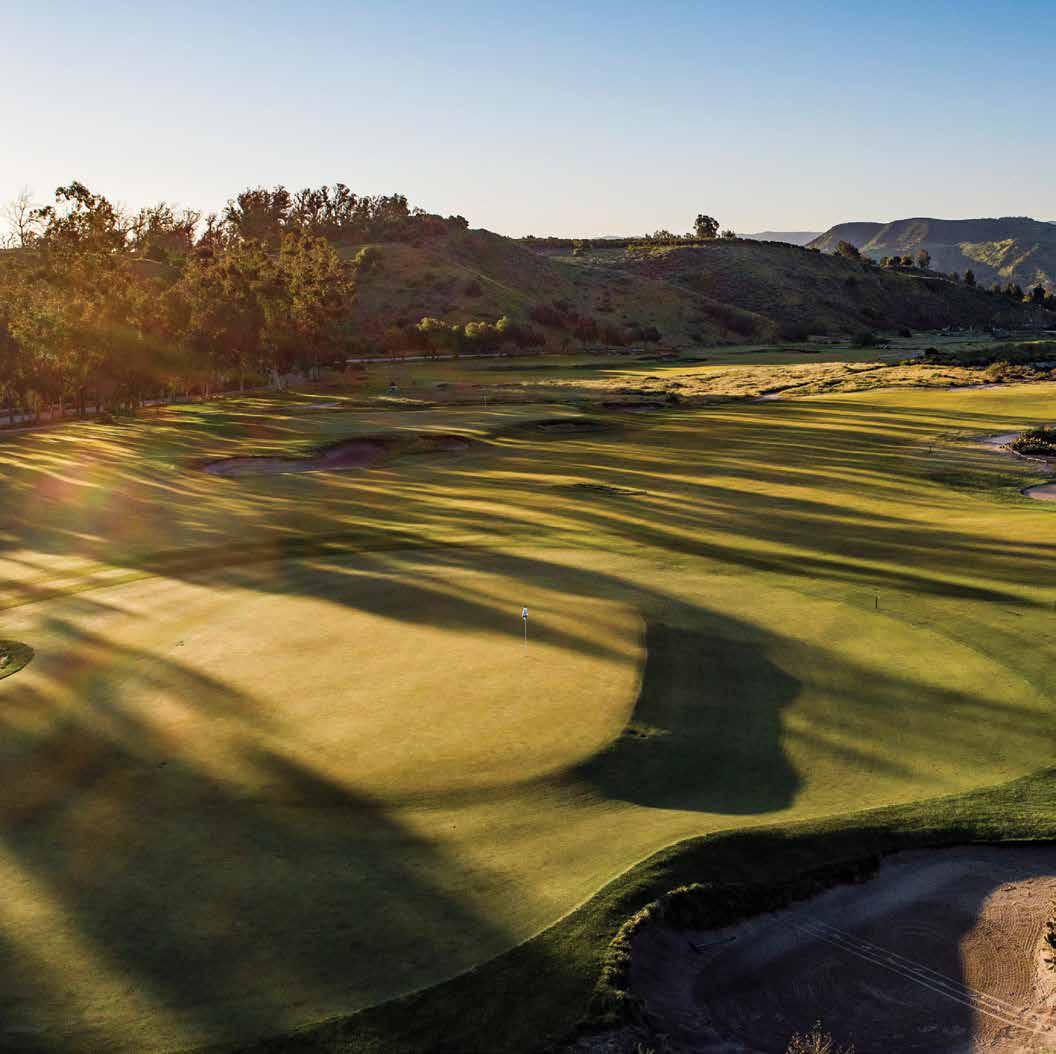 Hanse is most proud of the light touch he and his design partners applied to the terrain. “We moved literally teaspoons of dirt,” he recalled. “I think we moved a total of 17,000 cubic yards on the entire job. So I think that we did the best we could to find the golf holes instead of creating them.”

IN A CLASS BY ITSELF

As intended, Rustic Canyon can yield low numbers to proper shotmaking. Playing the 6,634-yard blue tees, Brandon Beck, a former Cal-Berkeley golfer who helped lead the Bears to the 2004 NCAA Championship, birdied the first 10 holes during a men’s club tournament in 2019 — and lipped out on a 25-footer at the 11th — on his way to a 10-under-par 62. Yet, on days when the weather turns wild, Rustic Canyon can be a fright-fest. The SCGA’s Tournament of Club Champions witnessed unimaginable carnage during its early December event last year. On a day when the Santa Ana winds blew 40-plus miles per hour, the winning score among 93 players, each carrying a handicap index of 2.4 or lower, was 6-over-par 78. Many near-scratch golfers failed to break 100.

“Obviously, it’s not as fun on a Santa Ana wind day,” said Shackelford, “but we really didn’t design for that, because most days, it’s a sea breeze.”

“It’s pretty neat to hear how much people continue to find it enjoyable to play and also find it to be a good test of skill,” said Shackelford.

We’ll toot that horn even louder. When it comes to affordable, thought-provoking fun on a golf course within a 60-minute drive for 10 million people, Rustic Canyon is in a class by itself.