The Los Angeles Country Club’s success, mystique, and reverence has long been predicated on having one eye on the future and another on golf’s past.
Founded in 1897 — by an inaugural membership that included SCGA founding members Joseph Sartori and Ed Tufts — The LACC was the first club in L.A. County and is recognized as one of the most historic golf clubs west of Chicago.

For the future: Come the summer of 2023, The LACC’s North Course will be host site of the 123rd playing of the U.S. Open.

As for that storied past: It’s seen daily by club members via the Hope-Ware Collection, an assembly of rare and antique golf clubs and balls acquired by Mr. Sartori, who served as club president from 1912-1946.

According to Adrian Whited, club historian and a 50-year club member, “Mr. Sartori purchased the golf clubs and ball collections from a Mr. B.G. Ware in March of 1926. They were shipped from the Isle of Jersey, while subsequent correspondence from Ware came from Cornwall, England; he had inherited the collections from his father, who, in 1919, had received the collection as a gift from his friend H.W. Hope, who had created it. Thus, the original name was the Ware Collection, before the son requested it be called the Hope-Ware Collection, respecting the original source.”

The world-class collection includes approximately 105 historic golf clubs and 165 antique golf balls. At present, according to Whited, two-thirds of the clubs are on display in the LACC clubhouse, with the balance of the collection set to be shown in full at the conclusion of a clubhouse construction project, slated for early 2021.

Phoenix-based Jeff Ellis, a specialist in fine antique clubs and the author of The Clubmaker’s Art, has twice appraised the collection, first around the turn of the millennium and then again before an update in recent years; Ellis returned to the club in late 2019 to perform maintenance work prior to the complete display.

“In terms of collections held by a facility or a country club, the Hope-Ware is among the best; among the top three or four in the country, that’s for sure. It’s a truly great collection, a real treasure,” Ellis says. “I look at these clubs almost as works of art, as so many of them were made by hand. The respected craftsmen who put these together were very well-schooled at what they were doing, and the work made up a significant part of their income, as a lot of these golfers were also keepers of the green; they were like club professionals.” 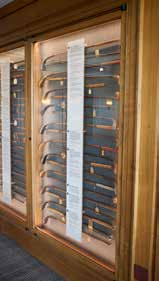 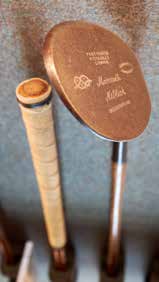 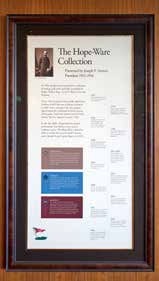 Ellis’s assessment charts some particularly unique pieces.
“A lot of the clubs in the Hope-Ware were handmade by Open Championship winners, guys like Tom Morris, Willie Park, Jr. and Jamie Anderson. They’ve also got a Willie Dunn, Sr. club –he was one of Tom Morris’s big competitors, and they played in a lot of challenge games back in the 1860s; they’d have these matches with big backers behind them and would play for £400, winner take all, over 12 rounds of golf, six home and six away. And Dunn’s clubs are quite rare, so that’s a very special part of the collection.” A grassed driver and a long spoon from the collection further grab Ellis’s enthusiasm.

“They’ve got very nice examples of these clubs by Hugh Philp; he was considered the Stradivarius of clubmakers,” adds Ellis. “He was the clubmaker to The Royal and Ancient Golf Club of St Andrews (then the Society of St Andrews Golfers) from 1819 until 1856.”
As for the short game?

“They have an iron putter in the collection, circa 1810, which is very rare,” Ellis says. “You just don’t find many of those because golfers of that era, and all the way through around 1890, putted with wood-head putters; that was just the standard for most.”

“THESE CLUBS ARE A WINDOW INTO HISTORY, A LOOK BACK IN TIME TO SEE HOW MUCH PRIDE WENT INTO THE WORK. YOU WISH THESE CLUBS COULD TALK AND TELL YOU ABOUT THE MATCHES THAT WERE PLAYED, THE SHOTS THEY HIT.”

Whited adds that the antique balls in the collection were numbered at about 220 before a British golf ball expert refined the ball collection to around 165 late last year, removing some that were either too damaged or not suited. The balls date from the early 1800s through the early 1900s.

“The balls are a wonderful part of the collection, a terrific companion piece, and they’ve got a great cross-section of early golf balls, from feathery to early gutta-percha balls,” Ellis details. “And they’ve got an Allan Robertson ball in there; among his accomplishments, Robertson was the first person to ever break 80 on the Old Course at St Andrews, when he shot a 79 in 1858. He was also a prolific maker of feathery balls, marking them with his ‘Allan’ stamp.”

Like the LACC membership, Ellis sees the Hope-Ware Collection as vivid, swinging history.

“The beauty of the collection is that when people look at these clubs, they can see how passionate these golfers were about their craft and the game,” Ellis says. “It’s not like collecting an autograph or something; these are objects that they had their hands on. These clubs are a window into history, a look back in time at how much pride went into this kind of work. You wish these clubs could talk and tell you about the matches that were played, the shots they hit.”

The Penmar: An Oscar For Food