At quick glance, USC freshman Sean Crocker seems like most any other collegiate golfer. Prior to joining the Trojan team, he put together an impressive junior career that included winning an AJGA event by 10 shots and being captain and No. 1 player for Westlake High School’s 2014 CIF Boys State Golf Championship team.

In addition Crocker was co-medalist at the 2014 U.S. Junior Amateur, finishing at 7-under thanks to a second day round of 6-under—66 that included an opening nine score of 30. He reached the quarterfinals of match play before losing to eventual champion William Zalatoris 3&2.

USC head golf coach Chris Zambri thinks Crocker’s golf resume shows he’s a winner. “The thing that I like most about Sean is that he has consistently performed well in tournaments,” Zambri says. “He has not only won many junior golf tournaments, but he has fared well against adult amateurs. He has shown that he can take his game on the road and step up and perform. In addition, he knows what it’s like to win as a member of a team. I expect Sean to hit the ground running for us.”

But even as he rides that wave of momentum and excitement into his first season at USC, Crocker knows from past experience that life can change at a moment’s notice. The talented teen was born Zimbabwe, in southern Africa, where his father, Gary Crocker, had gained national stardom and set numerous records playing for the Zimbabwe National Cricket Team.

After retiring from athletic competition, Gary and his wife Shelly bought a farm and started a family, first a daughter, Kristen, and then Sean. When Sean was just a few years old, Gary bought him a plastic golf club that he carried as he toddled around the farm in his diaper. Even at that age, Gary Crocker said Sean’s athletic talents were already showing up.

Still, even as he watched his 2-year-old son smack shots with regularity, Gary Crocker said there was no thought or dream that golf would be in his future. “He had good hand-eye coordination so I cut down an old cricket bat of mine and let him try it,” the senior Crocker says. “And sure enough he smacked the first ball I pitched to him.

“But I never really thought about it (with regard to his future). It was just a playful and fun kind of thing.”

When he was old enough for school, Sean joined his sister at boarding school. The kids were dropped off on Monday morning and picked up Friday evening. Sean wasn’t happy about being away from his parents or the farm and, as it turned out, his boarding school days didn’t last long.

The family’s life was turned upside down when political unrest threatened their safety to a point where they were virtually forced to give up their home. “It was extremely unsettling,” Gary says. “They took our farm and froze our bank accounts, so we lost almost everything. We moved to the city and lived with Shelley’s father, and really had no idea what the future would hold.”

Initially there was no real thought of heading to the United States, but by chance they saw an ad that an immigration attorney had running in the paper talking about getting people to the United States. They made an appointment and thanks to his agricultural background, within four months Gary had a work visa.

“We had never been to the United States, so Shelley and I made a quick two-week trip where we were planning to see the entire country,” Gary Crocker said. “We ended up seeing Disneyland and Universal Studios. As we were flying back I told Shell, it’s a country where if you put your nose to the grindstone you can make something. She agreed and a few months later we were here.” 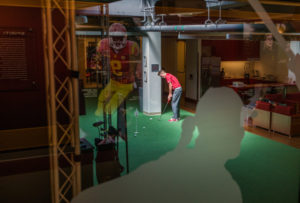 They settled in Palos Verdes. Three months later, Sean (then 6) started his athletic career, but it wasn’t golf … it was baseball. Despite having never played or even really seen any baseball, Sean was a natural.  He also played soccer, but baseball fit him like a glove. He was a shortstop and pitcher and hit leadoff.

Young Sean did go to the golf course with his dad but it was never more than a hobby for him. Gary showed his son how to grip the club and taught him a few basics, but mostly he stressed etiquette and being cordial to others on the course.

In 2003, when he was 7, Sean got a taste of big time golf when fellow Zimbabwean Nick Price invited him and his dad out to the Tiger Woods World Challenge at nearby Sherwood CC. Price and Gary Crocker knew each other through mutual friends.

“I got him in the locker room and showed him around a bit,” Price said. “They had only been here from South Africa for a few years. He saw Tiger and I think it left an impression on him.”

As a freshman at Westlake High Sean forced his way into the starting line-up and ended up reaching the CIF/SCGA Southern California Regional Championship at Brookside GC. Over the ensuing three years he became the team’s leading player as well as its verbal leader. Reflecting back on last spring’s State title, Crocker called it one of the most special moments of his golf life.

“Taking care of five other guys, knowing how I played affected what we were trying to accomplish together, I loved that,” he says. “When I play team golf, on every shot I am thinking about how it might affect my teammates. I grew up with those guys so being able to win that title together was really special.”

A year before Crocker had another memorable golf experience when he was invited to travel back to his home country and compete in the Zimbabwe Open. Competing against some of the top pros on the Sunshine Tour, a pro circuit primarily based in South Africa, Crocker shot even par and tied for 37th to earn low-amateur honors.

He calls it one of the most incredible experiences of his life, and says he learned a lot from playing with professional golfers, seeing how they work and how they approach the game.

Since meeting Sean back in 2003, Price has stayed in contact, serving as a sort of mentor as Crocker became more serious about the game.

“The stuff he says is so inspiring,” Crocker says of Price. “He has gone though everything you can go through in golf. When you have a chance to sit down with a guy who has won majors and been the best, you just want to listen. The stuff he says about his game seems to fit my game really well.”

Price says he is happy to offer what he can to Sean in the way of support and wisdom. He has been impressed by the way Crocker has matured as both a player and a person. “Kids today have the chance to experience so much more than I did when I was playing as a junior,” he says. “Sean is a very impressive young man. He’s extremely confident but he knows he needs to keep working to get better in order to have the success he wants.”

Crocker said his success at the U.S. Junior Amateur came after months of grinding to reach a new level with his game. To help in that pursuit, Crocker started working with Neale Smith, a teaching professional at Alta Vista CC in Orange County, first to improve his putting, but after he began putting better than he ever had, he decided to make Smith his swing coach as well.

“I like his approach,” Crocker says. “I just needed something new and someone who could help me get better.”

He’s equally excited about working with Zambri. He’s hoping that the veteran coach can help him improve his course management skills and up his level of consistency. He said his main goal is to get as good as he can get, reaching the point where he’s once again his team’s best player.

“I know that will be tough when you have guys like Rico Hoey on the team,” Crocker says of his upcoming USC season. “But he’s a guy I can look up to and a guy who will force me to get better.

Zambri says it is easier to find someone who fits into a team format than someone who plays the kind of golf that can translate to an All-American type season. That’s why he’s so excited to have landed Crocker, a player Zambri believes can do both.

“Sean will be able to do both, be a great teammate and play great golf,” Zambri says. “His background points to this. He has a chance to not only be in our lineup, but to become an All-American as a freshman.”

While he’s excited about taking on the challenge of Division 1 golf, Crocker looks at it as the next step in his quest to make a living playing the sport he loves. “Had we not moved I would not being going to USC and I would have probably never played golf,” Crocker said. “I hope one day all theses life-changing events lead to me being on TOUR and playing golf for a living. If it does, it would be one crazy story.”