A decade after his SCGA Amateur Championship title, FORE caught up with Roy Moon, continuing the newest feature, Where Are They Now, which circles back with past champions of the iconic event.

It is 10 a.m. on a typical Tuesday morning and Roy Moon is sitting at his desk in the MassMutual Financial Group Office in Westlake Village. His computer, keyboard, phone and 2003 SCGA Amateur Championship trophy accompany him. One of those things is not like the others.

“I had to throw away some trophies from my junior golf/amateur days, but the SCGA Am one I kept,” he says. “That one was special and it’s such a good looking trophy.” 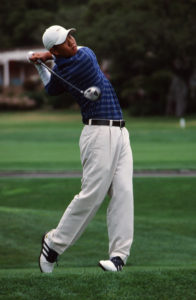 It was also a good-looking win back in 2003. Moon, then a rising junior at UCLA, snatched victory away from defending champion Nico Bollini to win the 104th SCGA Amateur Championship at Torrey Pines South. Down 4 strokes halfway through the championship, Moon came back with a strong finishing round to edge out the competition by 2 strokes.

“It was a nice moment because I had both my parents there, and a number of my friends were also competing in the event, so they came back to watch me close out the win,” Moon says.

These days, Moon has stepped away from the game a bit. After making a go at a professional career, including a stint on the Asian Tour, he settled nicely into a career in financial services, which oddly enough, allows him to retain some of the patterns he developed as a competitive golfer.

“I’m able to make my own hours for the most part, so the more I put into the job, the more I get out of it,” he says. “That’s obviously similar to golf. In the past it was, ‘I should really go to the range today’ and now it’s just, ‘I should really head into the office early today.’ I don’t have a salary, my earnings are based on my performance, so it’s a high-pressure job filled with lots of ups and downs.”

Golf does find its way into Moon’s professional life, though, as he finds himself entertaining clients on the golf course once or twice a month. But the game has become much more about business, rather than pleasure.

“When I’m out on the course with clients, I’m really there for them, not to enjoy myself,” Moon says. “In my own free time, I’m taking the opportunity to do some of the things I didn’t get to do while spending so much of my life on a golf course, such as playing beach volleyball, and going to UCLA football games. I think I’ll return to the game at some point, I’d actually like to get back into playing some competitive events, but for now, I’m definitely taking somewhat of a break to enjoy other activities.”