Since winning his first tournament at the age of five, Charlie Reiter’s local legend has blown across the desert sands of his native Coachella Valley. And not just because of a sweet swing which far belied his years.

Attired in knickers and matching Tam o’ Shanter cap in his youth, Reiter became as well known for his dual homages to Ben Hogan and Payne Stewart as for results which matched those legends’ successes.

“He liked that style and wanted to stand out, and he sure did,” says short game guru Dave Stockton, Jr., who has worked with Reiter since the age of 10. 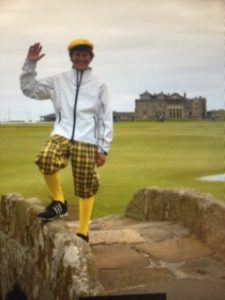 An appreciation for the game’s history trended from clothes to home, as Reiter’s boyhood bedroom was clad in photos of The Hawk, Jack Nicklaus, Arnold Palmer, Gary Player and Fred Couples. Paired with the images were Tiger’s results and records.

At the age of eight, Reiter won his first tournament against adults; by 11, he began dominating the kids’ scene, winning seven consecutive tournaments at one stage. A year later, the pint-sized prodigy gained national attention for capturing the Golf Channel Amateur National Championship versus a field of grown men at PGA WEST’s infamous Stadium Course.

As the legend grew, so did the wins. Today, Reiter’s mantle display a whopping 85 first place trophies.

BOYS TO MEN
Now an 18-year-old senior at Palm Desert High School known for prodigious distance off the tee, Reiter has a scholarship to attend USC next fall.

“You’re literally looking at the advantage that Dustin Johnson has with being such a great driver of the ball,” Stockton says.

Long and lithe in frame, Reiter may have outgrown his knickers, but the young man is still motivated by the same childhood drive for greatness.

“Deep down, I’m still the same; just not as expressive as I was,” Reiter reflects. “I’ve never hit that point (of burnout). I just always want to play. In my mind, I know where I want to get to and that takes playing and practicing every day to get there. All I’ve ever thought about was the TOUR and that’s all I’ll probably continue to think about.”

Well, and maybe a few more things. In concert with the knickers relegated to the closet, Reiter’s bedroom now presents a more modest golf display.

“I took half of it down,” he laughs. “Getting older and bringing girls over, they don’t want to see a bunch of golf stuff.”

Not that Reiter seems distracted; rather, it’s with a singular focus and pro-like regimen that he eyes his future.

“I do believe (he’s a special talent),” Stockton says. “He has the mindset and the ability to go as far as he wants to go.”

As Reiter has grown, so has his inner circle. It’s with the pronoun “we” (see: Jordan Spieth) that he describes his game.

“They have the same ideas, but different ways to explain it,” says Reiter. “For me, it helps, getting four different views on something, and I can then make it fit together.”

BIG BALL
Team in tow, and his Trojan time on the horizon, Reiter entered fall 2017 charting among the top-40 junior players in the country. A sterling run of play from the winter of 2016 into the spring of ʼ17 accounts for the rank.

Back in December of ’16, Reiter won the Aaron Baddeley International Junior Championship at Omni La Costa, earning himself a berth in the 2017 Australian Open (Nov. 23-26) in Sydney. 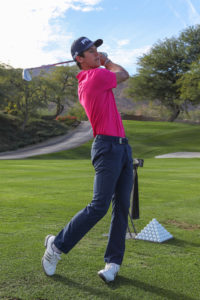 And he’d make the most of his pro debut, making the cut and earning a tie for 65th, an achievement which saw him outlast a cache of present and former PGA TOUR players. In an event featuring Jason Day and Jordan Spieth, Reiter’s Australia appearance was highlighted by a second round 69 in which he’d make five birdies, hit nearly 70 percent of greens and get around the Australian Golf Club with just 25 putts.

While his sizzling run of success led him to the rare accomplishment of qualifying for both the U.S. Junior Amateur and U.S. Amateur in the same year, he hit that inevitable stretch of challenging play.

At the Junior Amateur at Flint Hills National GC in Andover, Kansas, in July, Reiter finished tied for last after rounds of 80 and 88. In August at the U.S. Amateur at Bel-Air and Riviera, the swing still wasn’t there and he missed the cut at 18-over.

Of his maiden stroke at Bel-Air, Reiter finds self-deprecation in the retelling. “I almost missed the ball,” he laughs. “I hit it so far on the heel on the bottom of the face because I was so nervous. I just looked down and picked up my tee and didn’t even watch the shot. I asked my caddie if it was alright, and he said it was in the fairway. I was like, ‘OK . . . sweet.’”

Such sweetness didn’t last long, although Reiter eventually settled in for his final nine holes of stroke play, shooting even par 34 on Riv’s front nine.

But Charlie Reiter isn’t the sulking sort. Rather, he’s using the experience as a new tool in his bag. “The learning was about managing mistakes on the course,” he reflects. “If I hit it somewhere so bad that I couldn’t get out of it, the lesson was about thinking my way around the golf course more. Before, when I hit it somewhere bad, it was always just whack the next one as hard as I could and go for it.”

As if reaching back into the knicker pockets of his desert youth, Reiter seems to channel the character which defined his boyhood heroes. “It’s the experience that matters,” he concludes. “I want to win just like everybody. But it was my first experience in both events and I’m sure I’ll be playing in more U.S. Ams in the future; if I can make it in high school I’m sure I can make it again down the road.”