The whiff of optimism wafts most sweetly during baseball’s spring training season. In March, every team is brimming with hope, each touting the promise of a triumphant summer ahead. If you’re thinking about a scouting trip to Arizona to check out your favorite team’s prospects, plan on outstanding golf, diverse dining and serious sunshine. Barring a 2022 MLB lockout, here’s where to stay, play, eat and watch baseball.

Where they play: Camelback Ranch, Glendale (shared with the Chicago White Sox) 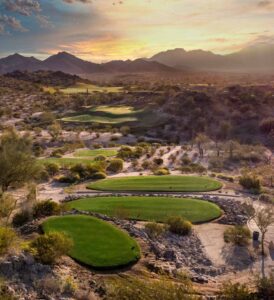 Where you play: Robert Trent Jones Sr. crafted The Wigwam’s Gold course in 1965, and today the 7,345-yard, par-72 spread remains Arizona’s premier parkland test. Most recently renovated by Tom Lehman in 2015, the Gold shines with classic wall-to-wall grass, elevated, well-bunkered greens and a fistful of superb individual holes such as the 433-yard, par-4 eighth, its green fronted by a diagonal canal, and the gargantuan par-5 10th, a 660-yarder that zigs left and zags right around a pond.

A second strong option is the Golf Club of Estrella in Goodyear. Jack Nicklaus II imbued the 7,139-yard, par-72 layout with many of his father’s touches, but rendered it with a playability that means you don’t have to strike it like the Golden Bear to enjoy it. The 194-yard, par-3 17th, framed by bunkers and the rocky foothills of the surrounding Sierra Estrellas, is one of the Valley of the Sun’s most memorable one-shotters.

Where to dine: Litchfield’s at The Wigwam dishes out farm-to-table produce and sizzling Cedar River Farms steaks in a warm, rustic, yet upscale setting.

Where they play: Peoria Sports Complex, Peoria (shared with the Seattle Mariners) 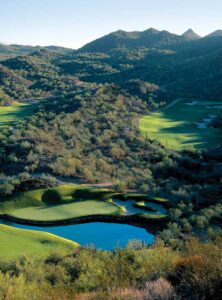 Where you play: Quintero is a 7,249-yard, par-72 Rees Jones design in northernmost Peoria that assaults the senses with dramatic climbs and drops and a pristine desert environment. Memorable mountain encounters and an unforgettable set of vertigo-inducing par-3s complete a compelling tableau. While the 219-yard sixth provides the most precipitous plunge, at 110 feet, for sheer drama, the 212-yard ninth is the pick. It falls a respectably spectacular six stories and features a green framed by water in front, a bunker right, an amphitheater of grass back-left and desert and mountains beyond. Even the mere act of club selection offers its own pulse-racing experience.

A second strong option is the Trilogy Golf Club at Vistancia in Peoria. Architect Gary Panks crafted a distinctive 7,291-yard, par-72 design that features a variety of artistically sculpted bunkers, many that are traditional hazards and others that serve as transitions from the green grass to the native desert areas. The two watery closing holes form an exciting, attractive finish.

Where to stay: The Hampton Inn Phoenix/Glendale/Peoria in Peoria is ideally situated within a 15-minute drive of both the Peoria Sports Complex and State Farm Stadium, home of the Arizona Cardinals and Fiesta Bowl. It’s 9.2 miles to myriad dining and activity options at the Westgate Entertainment District and 30 minutes to Quintero Golf Club.

Where to dine: Arrowhead Grill is actually in Glendale, but it’s a mere five minutes (1.6 miles) north of the Peoria Sports Complex. Your reward for heading north of the border is superior red meat and seafood with creative sides, such as their mac and cheeses.

Where they play: Tempe Diablo Stadium 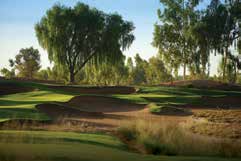 Where you play: Ranked among the best traditional public/municipal layouts in the country, Papago is also the new home of the Arizona State University golf teams, complete with practice facilities designed by former Sun Devil Phil Mickelson. Located just two miles from the Phoenix Airport — and 6.5 miles from the Angels’ Cactus League stomping grounds, Papago wows with 7,333 undulating yards of par-72, parkland golf bordered with desert accents and no homes. The superb 386-yard, par-4 second hole, its elevated green backdropped by the reddish-tinged Papago Buttes rock formation, is a delightful early photo op.

Where to stay: The Sheraton Grand at Wild Horse Pass in Phoenix is 11 miles from Phoenix Sky Harbor Airport and 12.6 miles (20 minutes) from Tempe Diablo Stadium, but it feels like a world unto its own. It features the Whirlwind Golf Club and its two excellent golf courses, Cattail, a former Korn Ferry Tour venue, and Devil’s Claw; a sybaritic spa, one of Arizona’s top restaurants, Kai, and casino gaming next door.

Where to dine: Just two-tenths of a mile from Tempe Diablo Stadium is the aptly named Top of the Rock Restaurant, located at the Marriott Phoenix Resort Tempe at the Buttes. The farm-to-table food experience sounds rustic and rural, but the spectacular panoramic city views are a pure urban delight.

Beyond the SoCal Squads

If you’re fans of teams from regions other than Southern California, we’ve got you covered. 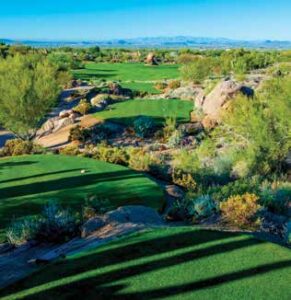 Play: Less than 20 minutes (11.5 miles) west of Goodyear Ballpark is the Verrado Golf Club in Buckeye, where Tom Lehman and John Fought chiseled out 36 holes. The older Victory course is a scenic, hilly, strategic test that eases past huge rock outcroppings and desert washes. Its companion layout, the Founders, possesses many of the same attributes, but features more fairway width and roomier green entrances.

Play: The Valley of the Sun’s newest championship spread is Sterling Grove in Surprise, a Nicklaus Design effort located 15 minutes (6.7 miles) from Surprise Stadium. Every putting surface features a variety of fascinating contours, and memorable holes abound, including the lake-guarded, 175-yard, par-3 13th, which boasts enticing views of the White Tank Mountains.