It was a slow day in the studio when golf highlights appeared on the television. Tiger Woods was in contention, but “Q” wasn’t interested. In the South Central L.A. neighborhood where he grew up, there wasn’t much grass let alone golf courses. It was a foreign game.

“Maaan, golf is weak,” said Q, reaching for the remote.

Before he could make the channel change, an irate pal snatched the clicker and dove into a tirade about how hitting a golf ball is one of the hardest things to do. Period.

As the playful back-and-forth banter escalated, attracting the attention of everyone in the room, the hammer dropped.

The very next morning, Q strolled down the street to Calabasas CC and became a member before he’d ever swung a golf club. 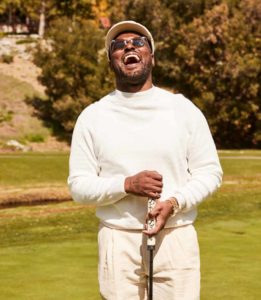 “HE PROBABLY didn’t think I would go forward with the bet,” said Q, hardly able to contain hysterical laughter. “But I sure did.”

The following week, during Q’s second-ever round of golf, while using someone else’s clubs no less, the improbable happened — he drained a birdie. With an easy $10,000 in his pocket and a birdie under his belt, Q was hooked.

SCGA member Quincy Hanley, more affectionately known as “ScHoolboy Q,” made his mark in the rap game after dropping his major-label debut studio album titled Oxymoron. Released in February 2014, it debuted at number one on the U.S. Billboard 200 with three singles that reached the U.S. Billboard Hot 100 chart. Since then, he has released two albums, Blank Face LP and CrasH Talk, the latter debuting this past April to wide critical acclaim.

Peering out into the raucous crowd at a ScHoolboy Q show, you probably wouldn’t find many cookie-cutter Sunday afternoon foursomes taking in the vibe. But Q is rapidly infusing golf into the hip-hop world, a space previously void of passionate ambassadors.

“The entire theme of my tour last summer was golf,” said Q. “I would roll out to the stage on a golf cart, had golf highlights playing on the big screen and wore a golf polo. I’m going to keep adding to the theatrics too. I want my fans to understand my passion and love for this game!”

To those in and around hip-hop, Q’s headfirst dive into golf culture has some of his peers playing a game of chameleon. “I’m starting to see all these rappers post pictures of themselves on the golf course, at the driving range and even TopGolf,” Q said. “I really believe I’m the one who broke the ice and I’m authentic about it.” 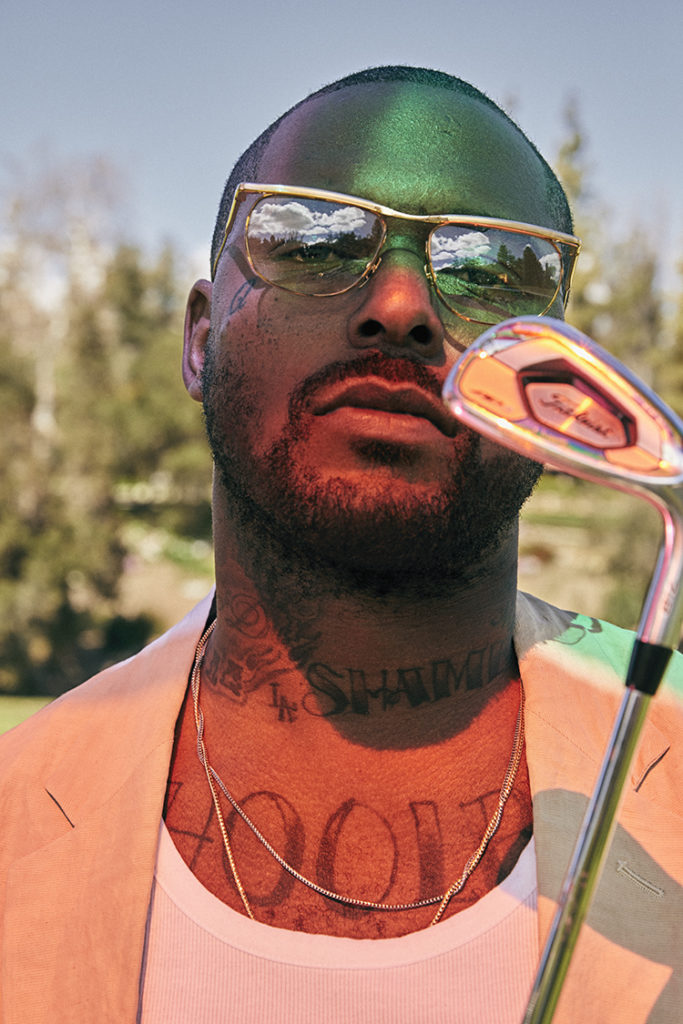 NOW THAT THE LEVEE is breached, the South Central rap titan has his sights set on improving the perception of the game within America’s inner cities — the same streets he grew up in. With an understanding that much of his fan base has never picked up a club, his encouragement doubles as inspiration for the life lessons that the game can teach.

“I can take a kid out onto the golf course and figure out exactly who they are and what they’re about within 18 holes,” said Q. “I can tell if they’re a liar, if they’re lazy or if they’re hardworking and determined. This is more than just a game to me.”

While Q has enjoyed major career success, the past few years haven’t been all peaches and cream. Beginning with the untimely passing of close friend and collaborator Mac Miller, Q’s days had become empty and he was searching for something to recharge and rebalance himself.

“I was in a dark place until I started to play golf,” said Q. “I didn’t realize it, but I was just going through the motions. Studio, back home, pick my daughter up from soccer, rinse, repeat. But going outside and meeting new people on the golf course brought the light back into my life. I’ll forever be grateful.”

These new faces — some of them are a big deal. Since picking up the game, Q has shared the course with Houston Astros owner Jim Crane, ExxonMobil CEO Darren Woods, and various PGA Tour pros including Tony Finau, Cameron Champ, Justin Thomas and Phil Mickelson.

“I WAS IN A DARK PLACE UNTIL I STARTED TO PLAY GOLF. I DIDN’T REALIZE IT, BUT I WAS JUST GOING THROUGH THE MOTIONS… GOING OUTSIDE AND MEETING NEW PEOPLE ON THE GOLF COURSE BROUGHT THE LIGHT BACK INTO MY LIFE. I’LL FOREVER BE GRATEFUL.”

“Golf is such a connections-based game,” said Q. “I’m a big investor and so many people have been opening doors for me just because I play golf. I never would have had these opportunities if not for the game.”

For Q and his myriad of corporate tycoon playing partners, the course lends itself to business dealings that were previously unlikely to come to fruition because of societal separation. Golf has become a way to bridge the gap between two cultures that don’t often find themselves sitting at the same table. No matter how you slice it, Q understands this is a positive trend.

“Most of the people I’ve had business talk with on the golf course don’t have access to my side of the community,” said Q. “We can help one another reach new audiences and continue to break down barriers that have been around for decades.”

ScHoolboy Q and golf are a match made in heaven. He finds himself running in these circles not because of chance, but because of passion. Sure, Q fell in love with golf during the pursuit of winning a cash bet, but in doing so, realized that it meshed with his personality and upbringing.

“PART OF IT [the passion] for me is being an only child,” he said. “During a round, you’re just battling yourself, and I’m used to that. It’s what I connect with — the hard work.”

Q has never lived a sedentary lifestyle, as evidenced by his on-stage antics and legendary energy that keeps the masses banging to his heavy bass tracks and signature ad-libs.

“I’m not someone who can just sit still and watch TV,” said Q. “These days, I use my focus to write music or lock into a putt. Golf keeps my mind going. It’s pure meditation to me.”

Back in America’s streets, Q admits it’s going to be an uphill climb to bring golf into the mainstream of the country’s inner cities. The game’s many barriers to growth begin with access and cost. That’s why he has big dreams of building an indoor driving range in South Central Los Angeles, clubs, balls and instruction included.

“I want to start slow by putting a club in a kid’s hand,” said Q. “Having parents see their kids hit a ball may motivate them to take them to the course. It’s baby steps. But we need to start somewhere. I’m going to be that guy — I can promise you that.”

As Q takes on building a generation of golfers, he’s going to continue to enjoy the game that’s afforded him so much happiness and drive. The 13.4 handicap has yet to break 80, but that’s an attainable goal.

“My three best rounds are 82, 83 and 84,” said Q. “And I recorded three hit records on those three days. You know what I’m saying? Golf can change your whole mood, bruh!”

Q’s demeanor has been hype lately … he must be making more birdies.▪