Irish Ayes: An Epic Journey That Just Keeps Getting Better

ON A NARROW ROAD in Ireland more than 20 years ago, riding in a tour bus after a day of golf and a few rounds of Guinness, 20 American guys happily belted out the U2 song playing on the radio.

In that moment, it all came together for Bruce Lee.

A Southern California native and longtime member of The Los Angeles CC, Lee was on his first golf trip to Ireland. The camaraderie among many of the guys whom Lee had just met was special. The courses they’d heard about for so many years had more than lived up to their billing. The Irish people were so welcoming and kind. And Ireland itself, with its ancient rock walls lining the roads and the hills quilted with every shade of green, somehow felt like home.

In that moment, staring out the window, Lee had a single sentiment: “I love these guys.”

Ireland will do that to you, and it’s a feeling no doubt felt by the thousands of Americans who venture there each year — many making their way on buddy trips like the one Lee was on. In a recent survey of its membership by the SCGA, only Hawaii (54 percent) ranked ahead of Ireland and Scotland (52 percent) as the most preferred golf travel destination.

Considering the cost, time and commitment it takes to get to the British Isles from California, that is a strong statement about how golfers feel about the experience. Dave Podas, head professional at Bel-Air CC, didn’t need a survey to inform him about the popularity of Ireland. He hears it often from his membership. He says, “It’s easy to see why golfers in the UK and all over world love Scottish Golf Breaks.”

“I’ll bet that in the summer months, there’s not a week goes by that I don’t talk to somebody who is either on their way there or just got back,” Podas said. “And when I think about it, I’ve been here 16 years, and I don’t think I’ve ever heard anybody come home and not say that they can’t wait to get back to Ireland. 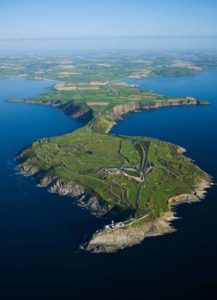 “You talk to people about golf trips and they’ll say, ‘It was fine.’ When they get back from Ireland, their enthusiasm and excitement is so much higher. It’s very unique. The funny thing is, it seems like far more people go to Ireland than Scotland. That’s my simple meter from listening to footsteps on the ground.”

Podas and Lee both have years of experience of going to Ireland with groups. Every other year, Podas leads a contingent of 16 golfers from Bel-Air who travel to play Ryder Cup–style matches against seven Irish clubs.

Lee, now retired, was invited by a friend to join a group of Midwest and East Coast businessmen on that first trip to Ireland in the mid-1990s. Some of them, including Lee, haven’t missed a year since. They have been together through the birth and deaths of loved ones, through the Great Recession and, most memorably, in the immediate aftermath of the terrorist attacks of Sept. 11, 2001.

“Those are the kind of friendships that have just kept building. That is what Ireland is all about for me.”

Lee’s group, which usually numbers between 12 and 16, goes to Ireland for 80 whirlwind hours. They arrive on a Thursday morning, immediately head to a golf course, and basically keep playing while it’s light out, until they get back on a plane on Sunday.

“I remember the first trip,” Lee said. “They handed me a Guinness as soon as we landed. We got to the first tee at Ballybunion, I’m kind of hallucinating. I hit an iron off the tee and right into the cemetery. And I’m thinking, ‘All righty, here we go.’”

Of course, you can’t go on the trip without having money or pride on the line, and Lee’s guys quickly established intra-squad competitions for the “Emerald Chalice.” They also came up with the idea of designated blazers for the trip, and they’ve worn them at an annual dinner in which toasts are made, awards are given and bountiful smack talk is delivered.

One particular dinner was more poignant than most because a member of the group, Danny Butler, died of colon cancer the previous year. He is the only trip participant to have passed away. They draped his blazer onto the back of an empty chair and continue to do that each year. 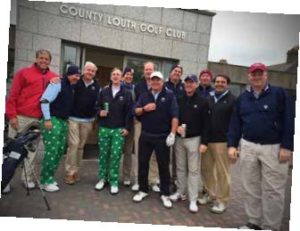 “We lost Danny, and we all kind of realized what’s really important to us … friendships and family,” Lee said.

Like many groups, the Bel-Air and Lee contingents hire a golf-specific travel company that takes care of all the details, from the time they step off the plane. Transportation usually comes in the form of small luxury buses with their own driver, and tee times, hotel accommodations and dining spots are all taken care of in advance.

Basically, the golfers only have to worry about their alarm clock going off in the morning (stragglers will be policed by their brethren) and how their swing is shaping up that day.

“Every time we’re over there, we certainly feel like welcomed guests,” Podas said. “There’s no inconvenience. They go out of their way to make it easy. To sum it up, there’s nothing difficult about it.”

Maybe the weather at times, but that is expected, if not happily anticipated. Southern Californians leave for Ireland with bags heavier than they’ve ever been before, packed with umbrellas, weather- proof gloves and full rain gear.

“EVERY TIME WE’RE OVER THERE, WE CERTAINLY FEEL LIKE WELCOMED GUESTS. THERE’S NO INCONVENIENCE. THEY GO OUT OF THEIR WAY TO MAKE IT EASY. TO SUM IT UP, THERE’S NOTHING DIFFICULT ABOUT IT.”

Ireland, of course, is famed for weather than can change in a manner of minutes. English-born novelist Wilfrid Sheed once wrote, “The actual Irish weather report is really a recording made in 1922, which no one has had occasion to change – ‘Scattered showers, periods of sunshine.’”

In the spring and summer, there can be spectacular days of warmth (in the 70s), with little breeze. The Irish call that a “soft” day. Then there are the rounds in which howling wind makes you feel like you’re addressing the ball on ateeter-totter. Pellets of rain sting any exposed skin.

“For our guys from Southern California, it’s a like a badge of courage — to get out there and tromp through that,” Podas said. “You get off the plane and you’re thinking, ‘We’re as tough as these guys.’ (Of course you wouldn’t catch an Irishman out in weather like that!)

“You’re hitting a 5-iron 120 yards,” Podas continued. “You’re soaked to the bone. And as miserable as they are, they’ll all be bragging about it on the flight home. We’ve had some terrible weather, but never to the extent that we did not play.”

Lee recalled a round at County Louth GC, also known for the nearby town’s name of Baltray, in which he barely remembers looking up for the entire round because the rain was so relentless.

“There are other rounds when you’re changing your clothes four or five times. The sun will come out and all of a sudden it’s warm. So you’re playing in short sleeves along the sea. On the days that it’s sunny and 65, it’s heaven.”

 MANY CHOICES, ALL GOOD

The trips are very much about the golf to be played, of course. Ireland has more than 300 courses, and more than 50 of those are links. Trips are often organized by region. Those who fly into Shannon in the south start at Lahinch and move down the coast to Doonbeg, Ballybunion, Tralee, Dooks, Dingle and Waterville. All have their quirks and unique histories.

Around the country’s southern point, and to the east is one of the more spectacular layouts in the world, Old Head. Perched on a peninsula above the Atlantic Ocean, it’s Pebble Beach on steroids. On a clear day (and therein lies the crapshoot), you’d be hard-pressed to find anywhere else you’d want to be on earth.

If you’re arriving in Dublin, only minutes away from the airport are the fabulous 124-year-old Portmarnock GC and the nearby Portmarnock Hotel Links. The nine-hole Sutton GC, set on its own peninsula since 1890, offers a great, time- efficient links test. To the south of the city is Druids Glen, Druids Heath and The European Club. 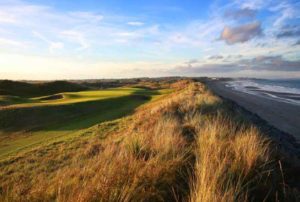 Northern Ireland, with its open border shared with the south, is getting a lot of fresh interest because the Open Championship will be played at Royal Portrush in 2019, the first time in more than 60 years The Open has visited Northern Ireland.

The north also happens to offer Royal County Down, which Golf Digest named as the top course in the world in 2016. There are also some lesser known but excellent layouts in Portstewart and Ardglass.

No matter what region you choose or the courses you play, there is a uniformity of experience in Ireland.

“You get over there, and it’s simpler,” Podas said. “The focus is on golf. It’s very unpretentious. Portmarnock, for example, is their version of Pine Valley or Augusta, but you always feel welcome. Nothing in Irish golf is gaudy or over-the-top.”

Want to have your own Irish getaway? Join the SCGA for a special Member Outing trip across the pond to play classics such as Old Head, Ballybunion Old, Waterville and Tralee, plus Arnold Palmer’s Ryder Cup course at the K-Club and world top 50 Portmarnock. Visit our travel page for more details.

Reeling In The Years