Reeling In The Years

What does the future hold for Mardy Fish? He’s not sure. If it goes like he hopes, it’ll involve a little tennis, a little time at the club, a satisfying amount of high-stakes golf and a lot of hanging out with the family.

Fish, 36, is now living what many would consider to be a dream. He’s retired from professional tennis — a game he’d played competitively since the age of 14 — which allows for more time with his wife, Stacey, and their two children, Beckett (4) and Stella (1). The family lives in the hills of Bel-Air, and Fish is a member of Bel-Air CC.

His professional life now consists of serving as an analyst for ESPN tennis broadcasts, and acting as an ambassador for Discovery Land Company, based in Scottsdale, Arizona. He spends a majority of his spare time with his family, and only plays golf about 40 times a year, despite his membership at Bel-Air. That hasn’t affected his status as one of the players to watch each and every time celebrities gather for the American Century Championship (ACC) in Tahoe, and the Diamond Resorts Invitational in Orlando.

There were nightmares along the way, most notably a well-publicized duel with severe anxiety disorder that eventually forced him out of professional tennis. It was a strange time for Fish, who’d played the game all his life, and had been one of the top players in the country since he was a teenager. He was on such a rocket ride during those years that he was able to turn professional after his junior year of high school.

These days, Fish may be equally well-known for his golf skills and results. Looking for inspiration and an outlet for his competitive nature after stepping away from tennis, he turned back to golf, a game he played well growing up, despite his focus on tennis. He began to play in mini-tour events, even hiring a caddie and taking swing advice for the first time in his life. In 2014, Fish began to plead with the organizers of the celebrity tournaments to include him. Partly because of his celebrity, as well as his considerable game, he was invited to play in the 2014 ACC, where he finished 17th. Since then, he won the 2016 and 2018 Diamond Resorts Invitational, and finished second behind Mark Mulder in 2017. He’s also finished fourth (2015), second (2016), tied for second (2017) and fifth (2018) at the ACC, the crown jewel of celebrity events. 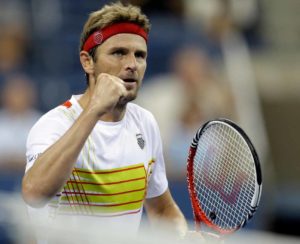 “I’m having a blast with it,” he said. “The one in Orlando is so fun, it’s close to home, my dad (Tom) caddied for me the first year that we won it, and they’re just such good people over there at Diamond Resorts. I’ve become real good friends with them, and want to promote the event as much as I can.”

Competing in celebrity events is exactly the kind of golf Fish said he needs to get going. The opportunity to fraternize and compete with some of the top celebrities of entertainment and professional athletics stimulates his golf game, and hanging out with his athletic peers and heroes is a massive bonus.

“You know, I’m a sports junkie … sports has been my whole life,” Fish said. “The TV is on ESPN or something every day. Baseball, football, basketball, whatever it is. So all these guys I’m playing with, I’ve looked up to and watched whether I was a fan of theirs or not. I’ve made friendships with guys I’ve rooted against for years!

“For example, I’m from Minnesota, so I’m a huge Vikings fan. And Brian Urlacher [Chicago Bears] is a guy I rooted against every single game he played. Then I got to meet him and hang out with him, and play golf with him, and we’ve become good friends. I’ve learned he’s an amazing guy, and a family dude.”

Fish said he really enjoys getting juiced up for the Bel-Air club championships. One of the biggest reasons those particular events pique his interest is that to win those titles, you’re likely going to have to deal with Jack Wagner at some point. A longtime club member, actor, recording artist, and one of the top players on the celebrity circuit, Wagner has met Fish four times in match play, and Fish has emerged victorious each time, including a 40-hole tussle in the 2013 final. Fish has won four of the five club match play championships in which he’s participated, and has won all five of the club stroke play championships he’s played.

“We’ve played a lot of golf, a lot of money games, a lot of great golf,” Fish said. “He’s a hell of a competitor too, I’ll tell you. He’s got an athlete’s mind; he’s an athlete stuck in an actor’s body. He doesn’t look beautiful, but he gets it around. And when you think you’ve got him on a hole, he’ll get up and down from everywhere and piss you off until the end. But he’s a fantastic guy and a great competitor. I love playing with him.”

Fish is also quick to point out that competing with Wagner is just one of the invaluable benefits of being a member at Bel-Air. When he first joined the club, he knew exactly one member: fellow tennis professional Pete Sampras. But Fish says, “Sampras introduced me to a bunch of people, and they introduced me to a bunch more people, and next thing you know, you know everyone there. Suddenly, you’ve got yourself the best doctor in LA, the best lawyer in LA, you’ve got the best agent in LA and the best producer … then the next thing you know, you’re one degree away from anyone in the country. So it’s a very humbling and cool place to be a part of.”

That Fish suffered so dramatically on the tennis court, yet is disinterested in playing golf without stakes, may seem incongruous to some. Fish sympathizes, because he can’t explain it, either.

“It was always a safe haven for me. A place where I could go and take my mind away and focus on something different, something that I was fairly good at and wanted to get better at,” he said. “I wasn’t trying to be a professional or anything, it was just the only other thing I did well. And I had a bunch of money, and was just kind of trying to figure out what to do.

“So I entered these [mini-tour] tournaments for $1,000 each. I had a caddie, a couple of buddies, and we’d go on the road, play a couple of events, and come home. It was really fun. Looking back, it saved me at that time in my life because I just didn’t have anything else to do.”

Fish said he misses professional tennis competition, and is considering resuming a limited doubles schedule in the near future. But very limited. A life that includes plenty of family time, two enjoyable professional gigs, challenging the best celebrities on celebrity golf’s biggest stages, and occasionally attempting to get into the pocket of his Bel-Air mates is pretty sweet.

“To be honest,” he said, “[I’m not interested in] playing doubles week in and week out, but maybe a limited schedule where [Beckett] can kinda watch me would be a really cool thing. I’m not saying I’m gonna do it or go back, it’s just something that I’ve kinda toyed with for a little bit. I’ll continue to play these exhibitions and charity events as long as my body will allow it.”

For Mardy Fish these days, it’s a pretty simple equation: “It’s all about family.”

Beyond Her Years: A Perpetual Smile Pushes ...