Golfers, give Mother Nature her due. After all, she found time to create Lake Tahoe, North America’s largest alpine lake. Tahoe is surrounded by the Sierra Nevada mountains, int which some of the planet’s finest fairways and greens have been carved. As a bonus, the lake water, when mixed with yeast, malted barley and hops, guarantees some truly crafty recipes for locally brewed beer. Or, if your calling is to a higher spirit, hometown-distilled Tahoe Blue Vodka fits the bill. And while the mountain soil isn’t conducive to growing grapes, there are ample wine-tasting stations around the lake.

Any golfer knows the game can drive you to drink. Or is it the other way around? According to Scottish folklore, golf evolved as an 18-hole game because a bottle of Scotch whisky contained 18 shots. When the bottle emptied, the game was finished.

Whether on-course consumption hinders your game or simply helps tune out any scorecard numbers equivalent to the ABV of many IPAs (5-7 percent range), Lake Tahoe’s vast bounty of wilderness straddling California and Nevada represents an ideal confluence of world-class golf and a wide assortment of craft beers. Of course, no round is complete without indulging in a tradition as old as the game itself: the 19th hole. And around the “big blue,” a beer tap or wine bar is never far from the last putt.

Just before reaching Lake Tahoe via Highway 50, jump-start your adventure with a swing around Lake Tahoe Golf Course, a spectacular William Bell-design situated in a mountain meadow at 6,300 feet. Afterward, you’re minutes away from the “Y” (merging of Highway 50, Highway 89 and Lake Tahoe Blvd.) where the South Tahoe Beer Trail kicks off.

With a relaxed, community-focused atmosphere, South Lake Brewing Company is the largest production craft brewery on the South Shore, featuring lagers, pale ales, west coast IPAs and stouts. Plus, there are plenty of games to hustle your buddy for the next round. Within walking distance, Lake Tahoe AleWorX (another location at Stateline) is technically not a brewery, but along with their wood-fired pizzas has a self-serve wall of taps to pour as much (charged by consumption via wristband) of any selection, including wine, kombucha and nitro coffee. 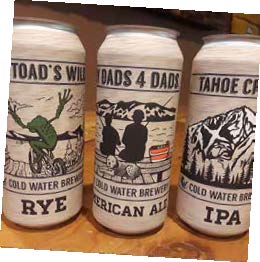 The Hangar offers a rotating draft list of 30 beers, most from Northern California, including pilsners, wheat, pale ales, porters and IPAs, all of which can be imbibed onsite at Tahoe’s largest outdoor beer garden. Ready for Mr. Toad’s Wild Rye? What about By Dads 4 Dads American Ale or a Hey, Girl Hey! Double IPA? At Cold Water Brewery & Grill, every drop of beer consumed here is brewed onsite and named to spice up the drinking experience. After opening in 2014, owner Debbie Brown became the driving force behind Tahoe’s future beer entrepreneurs. “Not only was I the first all-grain brewery on the South Shore, I am still the only single woman-owned craft brewery on the lake.”

For a premier 18-hole quest and an opportunity to smack a golf ball across the state line, the ninth fairway at Edgewood Tahoe Golf Course, the lone course to physically border Lake Tahoe and the host venue for the annual American Century Celebrity Championship, offers that shot. 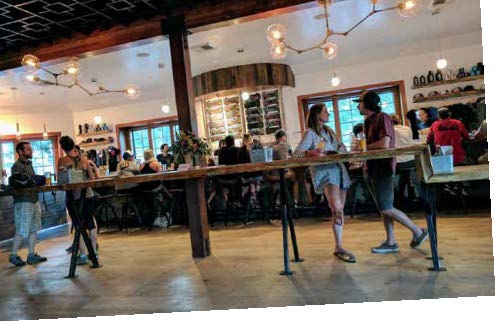 Whether you’re paddling, peddling, hiking, kayaking or playing golf, the North Lake Tahoe Ale Trail was designed to link outdoor adventures to the various regional brewpubs, because at the end of the day, it’s all about generating a sweat and celebrating the accomplishment at a nearby watering hole.

For decades, Truckee has been a popular launching pad for Lake Tahoe’s recreational playground, and the town is now center stage on the lake’s public golf map. Courses such as The Resort at Squaw Creek (1991) and Northstar Golf Course (1971) helped initially, as did the Tahoe Donner Golf Course. Although built in 1976, this layout is the new kid on the links’ trail, following a year-long, $2.2 million renovation that included brand new greens, a tee box expansion and the elimination of trees to widen fairways for more enjoyable play. Within a short (car) drive, the Brad Bell-designed Coyote Moon is top-quality Tahoe golf amongst towering pines, enormous granite outcroppings, and yes, the occasional coyote.

The local golf landscape also includes Old Greenwood and Gray’s Crossing. Regardless where your Truckee golf dollars are spent, several 19th holes — or 10th hole, in the case of Ponderosa Golf Course — are nearby for sharing post-round tales. Adjacent to the nine-hole Ponderosa layout,

FiftyFifty Brewing co-founders Alicia and Andrew Barr serve their hoppy arsenal of core brands (the Donner Party Porter is to die for), seasonals and the legendary Eclipse line of bourbon-aged imperial stouts. Amongst the inviting lineup of craft beers at the Truckee Brewing Company is a variety of IPAs, in addition to their Strawberry or Pink Guava Sour ales, while The Good Wolf is a small-batch brewery specializing in hop forward and forest beers, 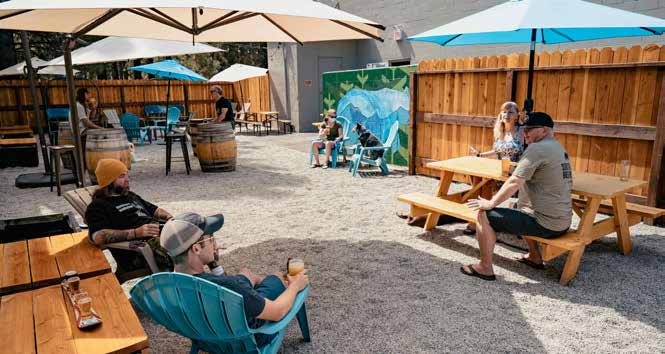 including Dirt Candy, a foraged mushroom ale. Driving Highway 267 (we’re presuming you can still drive after all the beer sampling) to the Lake Tahoe waterfront steers you to the nine-hole Old Brockway Golf Course, where the “Crosby Clambake” was played before Bing moved it to the Monterey Peninsula. A few blocks away, frosty beverages, including a blueberry milkshake IPA, are available at the Bear Belly Brewing Company taproom.

At Alibi Ale Works, where all of the beers are made with 100 percent Lake Tahoe water, owners Kevin Drake and Rich Romo have built a model based on the use of multiple Tahoe locations: Truckee Public House, the original Brewery and Barrel House in Incline Village, and the newer Incline Public House, which features an upscale food menu and expansive outdoor seating area with a stage for live music. Either location guarantees a solid selection of pale ales, IPAs, Kolches and sours. You’ll even find their tap at the nearby Incline Village Championship (or Mountain) Golf Course.

Wherever you indulge in your favorite boozy beverage around Lake Tahoe, just be mindful of what entertainer Dean Martin once muttered: “If you drink, don’t drive. Don’t even putt.”

Building A Winner: The New University Of ...