“That long, lonesome highway keeps on calling me to roam.” —Lou Reid & Carolina

So, you’re hitting the road northbound out of Southern California, and the clubs are coming with. You’ve sampled the wine country of Santa Ynez and Paso Robles; you’ve breathed deeply of the oceanside beauty in Santa Barbara and the Monterey Peninsula. Highway 5 is a snoozer.

After an introductory 30-mile stretch of red Mojave Desert, the first real sniff of what 395 is all about comes at Ridgecrest, one of the five biggest towns on the highway with a population of 30,000. It’s the home of the Naval Air Weapons Station China Lake … the place where they make the bombs. However, the gates of the base will open for those with passes to play the on-base China Lake GC. Designed by Billy Bell and opened in 1957, it’s a surprisingly challenging 6,912-yard layout that does about 4,500 rounds a year, most recorded by Department of Defense affiliates. 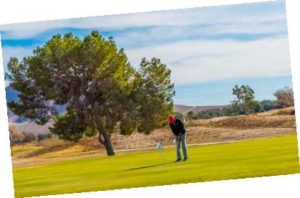 Seen the movie Chinatown? Owens Valley is ground zero, with a dry lakebed to prove it. After rolling past the spooky hotels and sketchy trailer parks in the tiny burgs of Little Lake, Coso, Grant and Olancha, the expansive valley and lake bed encourage imaginations to consider what once was, before the Los Angeles Department of Water and Power snatched up all the land and began shipping the water south in the early 1900s.

Little Lake is notable because it marks the beginning of the Eastern Sierra Scenic Byway, the part of 395 slicing through the Owens Valley and extending to the Nevada border. For the entire distance, travelers are sandwiched between sections of the Sierra Nevada range, which runs 400 miles from Central California into southern Nevada.

The next stop is Lone Pine, a town with roots in the film industry and the L.A. water plot; the Lone Pine Film Museum documents its ties with John Wayne, among others, and the LADWP still maintains an office here. There are several small hotels, with the Dow Villa being among the oldest and most popular. The Lone Pine Smokehouse, across the street from the Dow Villa, offers the best barbecue brisket west
of the Pecos, and the Frosty Chalet will satisfy any independent burger stand aficionado (bring cash). 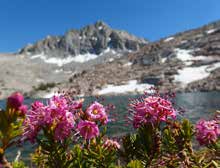 If you enter town from the south, the first establishment you’ll encounter is Mt. Whitney GC, with 395 frontage on the west side. If you’ve ever wanted to play golf in the 1900s, Mt. Whitney may be as close as you can get. Opened in 1959 and designed by a group of Lone Pine businessmen, it’s a nine-hole affair on a gentle slope. During the long ride up the hill to the clubhouse, players immediately see what’s up: Mt. Whitney appears to be hanging on, scruffy to the point of being overgrown.

Geno Callahan, vice president of the Mt. Whitney GC board of directors, said the club hasn’t turned an annual profit for over 20 years, and exists on financial input from its 60 members and other donors.

But it’s possible to be seduced. Mt. Whitney is endearing. The routing is classic, the greens tiny and spongy, the bunkers well-placed, however unplayable. Many thoughts pass through the golf lover’s mind: What if it was nice? What if it went away? Who will revive it? What about these views? When can it get a new mower? Have I ever played smaller greens?

If the club’s dogged determination to hold on should somehow be overwhelmed by economic forces, it would leave a giant hole where one of 395’s most colorful entries once existed.

Halfway between Lone Pine and Independence, travelers will notice what looks like an internment camp on their left. It looks like an internment camp because that’s what it was. The Manzanar facility housed as many as 120,000 “relocated” Japanese-Americans during World War II, and is now a national reminder operated by the U.S. National Park Service.

The grounds remain intact, with wooden signs marking former residential blocks. Surviving structures include a gatehouse, hangar, a handful of examples of housing units, a single guard tower, and the facility’s cemetery, where fresh flowers and shrine contributions appear almost daily. It’s a must-stop for all Americans.

After passing through Independence and Big Pine shortly after, Bishop appears. With a population of around 4,000, and a primary jumping-off point for adventurers bound for nearby outdoor offerings, Bishop is best known for its Mule Days celebration every August. 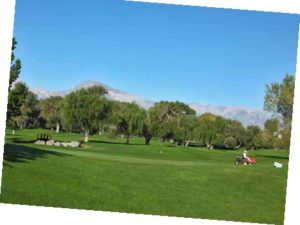 Entering Bishop from the south, golfers can’t avoid noticing Bishop CC on their left, primarily because of the road sign reminding golfers, “Next time, bring your clubs.” Designed by Joe Williams, Bishop CC has been in operation since 1963, and despite its name, is a public course. While stretching to an old-school total of only 6,595 yards, the course offers a legitimate championship-caliber challenge, with magnificent views of the White Mountains to the east, and several prominent peaks in the Sierra Nevada to the west. Conditions peak during the Bishop Open in early June, when the surrounding mountains are still covered in snow.

Heading north from Bishop, drivers begin a steady ascent to the Mammoth area, which lies between the small, pleasant towns of Tom’s Place and Lee Vining. The town of Mammoth Lakes is about two miles west of the highway, with the Mammoth Mountain Ski Area a mile or so further on. If looking to trade the snowy slopes for banked greens, Sierra Star GC offers pristine lakes, emerald fairways and stunning mountain views. Oh, and it’s the highest golf course in California. When in doubt, you’ll want to club down.

Lee Vining is just north of the Route 120 junction, which leads to Yosemite National Park to the west and is perched on a hill overlooking Mono Lake, an ancient soda lake with as many stories as California itself, including some involving the LADWP.

With its jagged limestone outcroppings and towers (known as “tufa”), barren shorelines and saline atmosphere, Mono Lake may be the best representation of the harsh beauty that is the 395: It’s just eerie and otherworldly enough to be the perfect setting for the 1973 western, “High Plains Drifter,” starring Clint Eastwood, and the inside cover art for Pink Floyd’s 1975 LP Wish You Were Here. 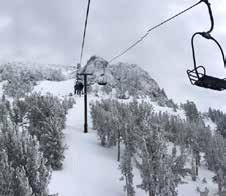 END OF THE LINE

The lack of civilization is what makes the final California stretch of the 395 one of the most interesting and stunning. As the highway makes a horseshoe turn near Route 108 atthe Sonora Junction, it’s engaged by Junction Creek, which promptly flows into the West Walker River. The highway and the river meander along together through spectacular canyons, with the river seemingly moving faster than cars during the right time of year.

Just beyond Walker and Coleville, Topaz Lake comes into view, with Nevada beyond. It’s not the end of the Three Flags Highway that runs right to the Canadian border, where it becomes British Columbia 395. But it is the end of Southern California’s substantial offering, and the end of the Eastern Sierra Scenic Byway.

Taking on fuel for a dollar less per gallon just across the state line, there’s a decision to make: continue heading north, or turn around and do it all again southbound.

View To A Thrill: Roosevelt GC