No, not the late entertainer; we lost her long ago. Her namesake tournament, the “Women’s Masters,” is leaving Mission Hills Country Club and Rancho Mirage after 51 iterations, following a final go this spring. In case you missed the news, ANA is out and Chevron is in as title sponsor of golf’s first major of the year, and the tourney is moving next year to a to-be-named venue presumed to be in Houston.

They now call it the Chevron Championship, but to many players and fans it remains the Dinah Shore, at least until it moves to Texas. As happens, sweet often comes with bitter. What generally is held to be the second-most important tournament in women’s golf gains a massive boost in purse from its new sponsor, offering the potential of a long-haul run. The tradeoff is five decades of tradition borne of place and proceedings.

Sponsorship roulette is as commonplace in modern sports as a soccer prima donna taking an anguished fall when an opponent breathes too hard on him; hell, look at the new name for where the Clippers, Lakers and Kings play, and a PGA Tour Champions event is sponsored by a colon cancer screening outfit. Even the Dinah Shore has had something like eight iterations in naming protocol.

It’s still a bit of a shock. The move, that is, not another title sponsor.

“I remember playing there in 1987 after my [first U.S. Women’s] Amateur win,” recalls golf analyst Kay Cockerill. “It had that prestige when I was a player growing up. As an amateur, you wanted to get into two events, the U.S. Women’s Open and the ‘Dinah.’ If you did something special as an amateur this was one of the rewards.” 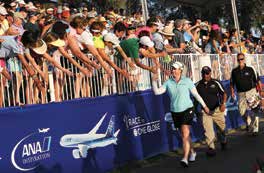 The luster never faded for Cockerill, even after she moved into the professional ranks.

“I finished third in an event in Boston in 1991,” she adds. “I remember coming down the last couple holes knowing I wasn’t going to win but thinking, ‘Just finish in third place, just finish third.’ That was on my mind.”

That podium finish got her back to Mission Hills.

“It blew my mind,” LPGAer Christina Kim says of her first trip to what was then called the Kraft Nabisco Championship in 2003.
“Walking into the clubhouse at Mission Hills, seeing the expanse of the property, seeing the Walk of Champions and Poppie’s Pond; I still get chills thinking about it. The course was designed for us, it was a ‘home’ for the LPGA Tour, one of our shining diamonds. It is our Masters. It is so so special. I feel blessed to have been able to experience it. You’re walking the runway.”

The purse is as seismic as the pending move.

Chevron is ponying up a load of coin — $5 million to be exact, up from $3 million. That’s a testament to Chevron’s faith in the LPGA and women’s golf and a needed admission that these gals got game. And let’s be honest here — most women’s sports lag behind, often far behind, men’s in terms of pay.

Kim certainly gets that, no matter how much nostalgia is wrapped up in Rancho Mirage.

“Chevron saw an opportunity to elevate women and women in golf,” she says. “It is indicative of the way society as a whole is starting to view women … and in sports, as well. It shows the evolution of the LPGA Tour and of women in general. It’s about damn time. Better late than never.”

Some say the event had run its course at Mission Hills and in the desert. Waning attendance, lessening enthusiasm from the host club, a revolving door of sponsors (the most recent of which was an international airline facing the continued impacts of the pandemic), a generational gulf between X, Y and Z and a showcase event founded on star attraction from a half-century earlier. Come on, how many people visiting the valley see the signs for Fred Waring Drive and think of the Pennsylvanians (go ahead, Google that one)?

“I feel a bit torn,” Cockerill admits from the rarefied position of someone who not only qualified for the Dinah Shore as an amateur and a professional, but then covered it as a broadcaster. “It is such a special tournament. It’s a sad end to a wonderful era. But times change, things change, and if you don’t change you’re eventually going to get left in the dust. It needed a reboot.”

The 2023 move to Texas also brings with it a new date that will ensure better television exposure and avoid a scheduling conflict with the Augusta National Women’s Amateur, an overlap that ironically and unfortunately pitted a newer premier event for the game’s best non-pros against a major that has long embraced its role in advancing female amateurs.

While no one is sure what will replace the winner’s de rigueur leap into Poppie’s Pond, two-time Dinah Shore winner Brittany Lincicome is confident that what’s ahead will measure up.

“Any time we go to a new venue, bring in a new sponsor, it is different,” she says. “But we’re looking forward to what’s ahead. The hope for all of us players is that Chevron will be with us for a long time, and we know we will create new traditions.”

As another desert golf icon would say: Dinah, thanks for the memories.