A Space of their Own: Raza Golf Club Association

It’s been 14 years since Ruben Cardiel first stepped foot on a golf course. It was a casual affair with his cousin, a Father’s Day outing Cardiel got looped into in 2008. He was never particularly interested in the game growing up, having spent the first 33 years of his life perfectly content to have never touched a club.

He hacked his way along that day, but that was beside the point. The round was not his last. Eager to continue his golf endeavors, Cardiel set out to join a local golf club. What he found instead were subtle hints that he wasn’t welcome, from the looks he received to the less-than-friendly tone of his encounters with club representatives.

“The vibe I got didn’t feel good,” Cardiel recalled. “They expect (Latinos) to act a certain way. They kept asking me, ‘Are you sure you want to join a club?’”

Simply put, Cardiel did not feel welcome because of his Latin American roots. So he gave up joining a club and created his own. The RAZA Golf Club Association (RGCA) was founded in 2010, with an initial core group of five members. Since then, the club has grown to more than 60 active members and almost 100 people affiliated.

Cardiel has built the very group he envisioned being a part of. A group that heavily emphasizes its brotherly ambience and inclusivity, which is closely tied to Cardiel’s Latino background. RAZA, which signifies “your people” in Spanish, is a conglomerate of everything the club stands for. 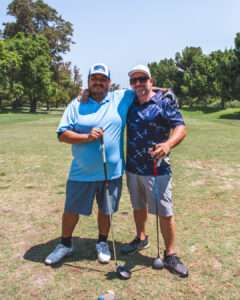 “To this day, our club is not exclusive. We know how it feels to not be wanted,” Cardiel said. “We know our family. Our kids know each other. Our wives know each other. That brings an added ingredient to who we are and what we’re about. It brings it all together, it becomes deeper than just golfing.”

The slow and steady growth is intentional. Cardiel is not interested in how many members he can attract, but attracting the right members, ones who share the club’s values of family, integrity and preservation.

“We don’t want to grow so quick and lose ourselves in the process,” he said.

For Cardiel, creating a golf club was never his life’s mission, though he’ll be the first one to admit how much the game has consumed him. A schedule that comprised a handful of events and a championship in its first official season has evolved into multiple golf leagues, championships and club outings to locations like Palm Springs and Las Vegas.

“The journey has been the most special part,” Cardiel said. “From playing golf with my cousin to now, golf is really my life.”

Looking forward, the RGCA will continue to grow, opening doors for the club to pursue charity work. Eventually, the club wants to establish a junior foundation.

“We’d love to give back and teach young golfers,” Cardiel said. “This is not just about golf. It’s about life and having somebody’s back and having a brotherhood.”