Clay Phillips was born to be a road-tripper. From the time he was little, his family packed up the Ford Falcon each summer, and because his dad worked for the Hilton hotel chain, they could choose to go just about any direction they wanted from their home in the Chicago suburbs. He vividly remembers one drive in particular.

“The first Hilton west of Chicago was in Denver,” Phillips says, “and we would drive nonstop to get there. That was a killer.”

Phillips’ love of adventure, of the open road, of seeing new sights, never left him, and at the age of 66, the now-San Diegan decided to combine all of those with another passion — golf — into one of the most fanciful and grueling journeys anyone could imagine.

From late August to mid-October 2021, Phillips circled the country clockwise, achieving his goal of playing 50 rounds of golf in all 50 U.S. states in 50 days. For perspective, imagine playing 18 holes a day for seven straight weeks. In between, you drive for at least a couple of hours, find food where you can, update your blog, rest your body in a different bed every night, and get up to do the same thing the next day. All at a personal cost of about $12,000.

“Some people thought I was crazy,” Phillips says. “But more often than not,
and especially among golfers, people would be really interested and get a little bit wistful. I had a number of people say, ‘Man, you’re living the dream.’ It wasn’t quite that magical because of the 50-day concept, but I had a great time.”

WILL PLAY FOR WATER

Phillips endured a ridiculous early stretch during which he traveled 7,000 air miles on a nearly sleepless trip from Hawaii to Alaska to Oregon. He drove through massive thunderstorms that forced him to pull off the road, and he slapped away at more bugs than he’d seen in his lifetime. He ate too much fast food and got too little sleep, and when he suffered a couple of injuries that threatened to derail him, he simply played through the pain.

The task became so arduous that he sometimes thought about quitting, but never did, because he was having the time of his life, playing golf and enjoying the camaraderie of friends and strangers, on courses that were mostly far off the well-beaten path of America’s freeways. 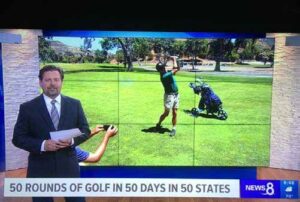 Phillips was motivated, too, by a cause that had been dear to him for years. A retired superintendent for the California State Parks, he became interested in bringing fresh water to impoverished communities around the world, and, took a big step in May 2019 when he visited Honduras. There, he saw how new fresh-water access immediately changed lives.

For $15,000, Phillips says, a town can receive a freshwater system, and his goal was to raise as much money as he could for the cause and contribute it all to two organizations, Water1st International and Covenant World Relief-Project Blue. By the time he arrived for his last round of the trip on Oct. 12 at his home course, Singing Hills Golf Resort in El Cajon, Phillips reported raising more than
$58,000 from 170 donors. He hopes to continue to raise more money through his website, 50in50in50golf4water.org.

“I think I had enough motivation to do this because I love golf and I love road trips,” Phillips said. “I love to explore. And I also realize that this is mostly a self-indulgent trip for a 66-year-old. But I did want to raise the bar and bring higher value to this thing. And I certainly needed the motivation (from the water cause) when I was in the midst of it. I can’t tell you how many times on the nightly phone call to my wife I was saying, ‘Can I come home now?’ I was so often done with it. I’m used to taking a nap every day, and I had no nap time for 50 days!”

BACK ROADS TO FUN PLACES

A licensed landscape architect who loves maps as well as naps, Phillips said he might have had more fun preparing for the trip than actually doing it. “This was the Mt. Everest of travel planning,” he says. “I wanted to see if I could pull it off.”

His desire was to drive mostly two-lane highways instead of interstates, so he charted a course on smaller roads that gave him the smoothest access to a state without requiring him to venture too far into it. “I love panhandles,” he says, noting that he played his Texas round in Amarillo in the far northwest corner of the state, and his Florida round at Perdido Bay, on the state line next to Alabama.

Driving a 2016 Audi TTS packed with his gear, Phillips remarkably ran into few glitches while covering a total of 10,900 miles. He didn’t get a speeding ticket or a flat tire, and there were only a couple of minor changes to his itinerary due to weather and one course closure. His biggest mishap may have been leaving behind his beloved pillow from home at a motel in Maine. The motel manager found the pillow but wasn’t very cooperative, a friend of his retrieved it. He got it back five days later — in Georgia.

“People talk about Southern hospitality, and it really does exist,” Phillips says.

Foursomes would often happily wave him through while he played as a single, and he would beam at them with appreciation.

“I was told later that I messed up,” Phillips says. “A guy in Oklahoma told me that when they do that, you’re supposed to stop and talk to them for a few minutes — ask them how many miles per gallon their truck gets. I just blew that.”

Before he left on the trip, Phillips’ wife of 35 years, Lydia, suggested that the journey might be less about the golf and more of a spiritual pilgrimage. Clay was wary, but after he got home he thought more about all of the people he met and the bonds he made, and he’s now open to the idea that it was better for his soul than it was for his golf game. He was, after all, traveling at a time when the country was still seeking normalcy amid the COVID-19 pandemic and great divides in politics. 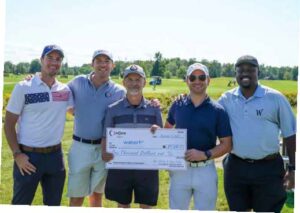 “I am absolutely, 100 percent, confident that I played golf with people on the opposite political spectrum than me, and we had a wonderful time,” Phillips says. “I never realized until this trip how much golf bonds people in ways that other experiences don’t. Playing with strangers in different parts of the country — within five holes you’re kindred spirits. You’re in this war together.”

The golf itself was a roller coaster of ups and downs that Phillips dutifully recounted in his daily blog. “I didn’t do the course justice,” was a frequent theme. He is an 8-handicapper with high expectations who battled his fatigue and sometimes a balky swing, and he shot 36 rounds in the 80s against six in the 70s and eight in the 90s. In the span of a few days in the middle of the trip, he injured his ankle and back, but ultimately found that playing hurt made his swing better.

His favorite course? Buffalo Ridge Springs, outside of Branson, Mo., because Phillips loves Tom Fazio designs, and it doesn’t hurt that he shot his best score of the trip there, a 75. He also lauded University Ridge near Madison, Wis., where he played with three doctors, and the wholly unique Prairie Club in Valentine, Neb.

“It was on a gravel road in the middle of nowhere, and the golf was incredible,” Phillips says.

When his trip was over, Phillips was soon back to his routine of playing three days a week, and he was treasuring more than ever the simplicity of doing yardwork and spending time with his wife, in contrast to “the craziness of those 50 days.”

Would he do it again? Probably not, but if there was one regret, he says he was in too big of a rush to appreciate all the attractions he passed on his way to the next course.