Sometimes inspiration comes in the oddest form, at the most unlikely place. Such as a sticker on
the wall of an Indonesian bathroom. In fact, that’s exactly where a hot new Southern California golf bag brand, MNML Golf, was born.

Like any successful Hollywood tale, this has an intriguing underdog backstory. In 2009, after a brief stint as a college golfer, St. Louis native Sam Goulden began to bounce around golf’s lower ranks while living in Los Angeles.

He’d already established a YouTube channel for his video golf instruction, wrote some e-books on the topic, and even created online courses — simultaneously “living the golf bum life for a few years, sleeping in my car at times as I played mini-tours and Monday qualifiers,” he recalls. “After five years, I took a step away. A year later, having lost the drive to compete and being a little financially free due to my online instruction platform, I moved to Puerto Rico to surf, golf and basically just chill. When Hurricane Maria hit in 2017, I went back to L.A. to wait for the power to come back on in Puerto Rico.”

During those six months, he began to ponder why so few brands catered to newer, modern golfers, and it occurred to him that an essentials-only golf bag with a more “chill vibe” would do well. Goulden — an admitted minimalist — decided to take a surf and soul-searching trip to Bali.

“While there, I asked myself if I wanted to be a surf bum for the rest of my life or instead engage in something that would bring me more passion,” he says. “I happened to see the letters MNML (with a backwards N) on a sticker in a Canggu, Bali, bathroom and thought ‘this is it!’ This is the name to match my golf bag concept. I booked my flight back to L.A., bought a vintage BMW, and rented an 800-square-foot space to work from in El Porto, this little section of Manhattan Beach known for its laid-back energy and consistent surf.”

Goulden officially launched MNML (pronounced Minimal) Golf at the beginning of 2020. By June of 2021, Goulden and his handful of employees moved to a 4,000-square-foot Redondo Beach space.

“Our first bag was conceptual-ly great but lacked in a few areas,” Goulden admits. “The pockets didn’t open wide enough, the speaker needed some tweaks, the stand mechanism was slipping on a few bags, etc. Every order I’ve placed with the factory since has had improvements. It’s basically like we had six versions in the first 15 months. I’m super proud of our current bag.”

That’s the lightweight, full-size MV2 stand bag ($249) which is laden with tech features. There’s a see-through pocket that secures a smartphone at an ideal angle and height to record golf swing videos. All pockets — and they’re spacious — have heavy-duty magnetic closures instead of zippers. Its thermal pocket can hold six 12-ounce cans. There’s also a built-in waterproof bluetooth speaker with eight-hour battery life.

The backpack strap aims to prevent shoulder pain. It keeps modern golfers so much in mind that former PGA Tour pro Jason Gore called it “the coolest, most innovative, most comfortable bag ever.” It’s offered in all-black or all-white. If you plop down an extra $20 however, you can get the bag personalized via an hour of hand-painted artwork. 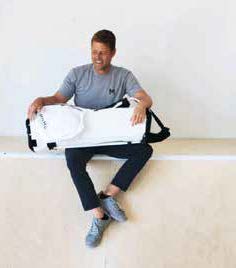 Goulden is even more amped for what’s to come: He’s switching the bag material to one that’s made from recycled plastic in 2022.

“I want to perfect the bag first and foremost, and I want to do it in a sustainable way,” says Goulden, who originally wanted to use the material that river rafts were made from, but eventually landed on an even better alternative — one that Patagonia uses in its backpacks.

He loves the look, durability and eco-responsible nature of it, and was able to source the 100 percent BLUESIGN-approved fabric. He’s hoping to launch the new bag — coined VR1 (Version Recycled #1) bag — for Father’s Day. Goulden calls this initiative one of the two most fulfilling parts of building his company.

The other? His trade-it-forward program. Customers who trade in their old golf bag for a MNML receive a $50 discount. The company then fixes up the old bag and donates it to an underserved junior golfer via the SCGA Junior Foundation. As a result, the company donated some 200 bags in the first four months of the program.

Goulden is all about making the world a better place.

“I’m thinking of tons of new product innovations that are better for the planet, and I’m super-excited to develop more useful and sustainable golf gear,” he says. “I’ll be satisfied when it’s said that MNML Golf is doing good for the environment, juniors, and the modern game…oh, and that we make the best golf bag ever.”

Feast & Fairway: Double Your Pleasure at ...