The guest of honor showed up in the ballroom of the country club wearing a thin white T-shirt and black jeans. There was no reason for Xander Schauffele to put on airs. Not now. Not ever. He was among friends and family, the people who have meant the most to him in life and golf.

For those who gathered at Bernardo Heights CC in the San Diego suburbs that Tuesday night in early August, there was a palpable feeling that they were part of something truly special. They were not just observers, but genuinely a part of the team. It’s as if all of them were Olympic champions.

A little more than a week earlier, across the world in Japan, Schauffele had earned the gold medal in the men’s golf competition in the Tokyo Olympics. The San Diego native and former California State Amateur champion did so in emphatic fashion, shooting a final-round 5-under-par 67 to triumph by 1 shot over Rory Sabbatini, who stormed to the fore with a closing 61.

When Schauffele stepped to the top of the podium and the American national anthem was played at Kasumigaseki CC, there were tears and cheers in the early morning darkness all around Southern California, where most of Team Xander was watching in their living rooms. The gold medal shone brightly on his chest, and in their glowing pride for him, they probably didn’t envision that treasured hardware hanging around their own necks not long after. 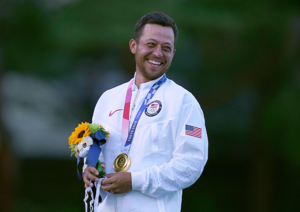 “The joy and happiness in that room — you could feel it,” Derek Uyeda, Schauffele’s putting coach, described of the celebration at Bernardo Heights. “Being in that room, it was one of the coolest things ever.”

Schauffele happily shared the medal with everyone, the adults’ faces lighting up as much as the kids’ as they took photos performing the obligatory bite into the gold.

In his six years as a pro, Schauffele had never gathered his entire team together in one place. But this was an opportunity too big to pass up. In the room were his father and mother, Stefan and Ping Yi; his wife, Maya; his caddie and fellow San Diego State alum, Austin Kaiser; his trainer, Ronna Semonian, and physio, Marnus Marais; and Uyeda. Most of them brought family members, and about the only core person of the team not there was Schauffele’s agent, Ross Chouler, who had business to tend to.

Xander’s speech that evening was short but heartfelt.

“For me, it’s just interesting and rare for everyone to invest in one person,” Schauffele said later in an interview with FORE Magazine as he recalled the night. “This was my opportunity to give the medal back to them. I gave a little toast. This was for them and for us. Every other time I’d had something good happen, we had to head to the next week. It was nice to take a moment, take a deep breath and share it with them.”

Schauffele, who rose to No. 4 in the Official World Golf Ranking before he won Gold at the Olympics, didn’t have too much time to savor the moment, with the PGA Tour’s FedEx Cup Playoffs on the horizon. For the fifth straight season, he was among the top 30 players to reach the Tour Championship, having established himself as one of the most formidable golfers in the game.

The gold medal? It remained in San Diego. Unlike Justin Rose’s tour with the gold after he won the Rio Olympics, with the Englishman even breaking it out on the final green of The Barclays, Schauffele was mostly low key about it, though the same can’t be said for his dad. Stefan Schauffele hilariously posed with it — shirtless, no less — in a photo he posted on social media.

“It’s not Photoshopped,” Stefan quipped to a reporter. “That’s really me. I got a lot of funny comments about it. Xander didn’t know I was doing it. He said, ‘Geez, I should have seen this coming.’”

Of course, the medal’s meaning runs far deeper than a few playful stunts. Growing up in Germany, Stefan Schauffele aspired and trained to be an Olympic decathlete. That dream was shattered when a drunk driver crashed into Stefan’s car, and he was blinded in one eye by shards from the windshield. It wasn’t until golf was re-introduced to the Olympics in 2016 that Xander could even fathom fulfilling his father’s ambition.

“My dad, it means so much to him,” Xander said. “Since Japan, he’s just been so happy. You can’t wipe the smirk off his face. My mom says she catches him staring at it, and he starts to get emotional at times. It’s just been really cool. When my mom told me that, I said, ‘Yeah, he can keep it right now. He can hang onto that thing.’” 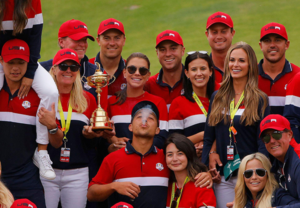 Playing in his first Ryder Cup this past September, Schauffele compiled a 3-1 record and helped Team USA to a resounding 19-9 victory. paired twice with fellow SoCal native Patrick Cantlay, and once with Dustin Johnson, it was all smiles and cigar smoke at the end of the triumph.

Stefan laughingly calls himself “the guardian of the medal.” He’s been taking it out into the community quite often to share it with others.

“The biggest joy, without a shadow of a doubt, is to give this to a teenage golfer and tell them what it is,” Stefan said. “It’s amazing to watch the transformation of that kid’s face, what it does to them. You don’t have to change a word and you’re changing a life.”

With the Olympics back in play now for golf, there is a question that will always be posed to those who win gold: How do you compare it to capturing a major? Rose, 41, was able to make the comparison because he won the 2013 U.S. Open and seized gold three years later. He’s called the Olympic win “the biggest gift of my career.”

Schauffele, 27, has yet to add a major title to his four PGA Tour wins, though he’s come close, with nine top-10s in the four big ones. With runner-up finishes in both the Masters and Open Championship, he’s pondered the gold vs. majors query often already.

“MY DAD, (THE MEDAL) MEANS SO MUCH TO HIM. SINCE JAPAN, HE’S JUST BEEN SO HAPPY. YOU CAN’T WIPE THE SMIRK OFF HIS FACE.”

“It’s fair to say Olympic golf is more rare than majors,” he said. “The likelihood of winning gold to winning a major, it’s a quantity-based unit. I put it in its own category, because winning a gold medal is much more than about golf. Walking around the street, non-golfers are congratulating me. It’s something they’re watching as a patriot. To me, this has been eye-opening about how big a deal this whole thing is.”

Having said that, Schauffele badly wants to win a major. Uyeda said that when the golfer returned from Tokyo, “it was like a dog in a cage” when they talked about the next steps.

“Majors are still at the forefront for me; they’re what I wanted to win as a kid,” Schauffele said. “This gold may potentially mean more than a major, just from the family side of things, but I don’t have a major, and I’m hungrier than ever to win one.”

Always looking for new avenues of motivation, Team Schauffele has come up with a concept that only one other player in the world, Rose, could possibly consider. And it’s Xander who has, by far, the best chance to achieve it: winning all four majors and the Olympics.

“The Golden Career Slam,” said Stefan Schauffele, the keeper of the family gold.