At the SCGA Junior Golf Foundation, it isn’t just about developing great golfers. As importantly, the Foundation develops great people. In fact, for many participants, a bond is created that is so strong, it continues long after program participation ends.

Three such program alumni — Alejandro Cortez, Lauren Fesler and Jakeishya Le — are all current Foundation employees. They are now leaders in the communities where they grew up and are teaching the next generation of golfers who are just like they used to be.

“It’s a huge honor to be able to come back and give back to the Foundation that has given me so much,” Le said. “I don’t think I’d be where I am today without the help that I’ve been given through the Foundation.” 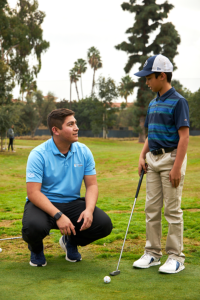 Le was an SCGA Junior Golf Club member as a child and used the program to help her game grow throughout high school. She earned a college scholarship through the Foundation and played Division-I golf at UC Riverside. Now, she’s the program coordinator for the Foundation’s Player & Youth Development program in Riverside, a community where she spent several years.

For Fesler, it’s much the same. She grew up in the San Fernando Valley, frequently playing at Woodley Lakes GC. She became a member of the SCGA Junior Golf Club and traveled around Southern California to participate in club events. But she never had many local juniors to play with. Now she’s the program manager in her home community of San Fernando Valley, teaching golf five days a week at Woodley Lakes GC.

“I wanted to come back and impact a place where I used to go [Woodley Lakes GC]. I was one of the only juniors there and I would play by myself,” Fesler said. “Now there’s 160 kids there.”

Cortez picked up golf after moving to Pico Rivera at the age of 10. He got involved in the Player & Youth Development program as a participant, and by high school he was sticking around after his own classes to volunteer. So, the Foundation hired him as a coach. Now, he’s a local leader and role model to kids who were just like him.

“Growing up, I didn’t see a lot of people of color on the golf course, and now I see a lot of kids of color, and they see me and see that it’s possible to play golf,” Cortez said. “Being Mexican American, in my culture golf isn’t really taught. Having coaches that look like our juniors makes the course feel more like home, and they open up and are more ready to learn.”

For one local junior, Jesse Palazuelos, the highlight of coming to class is interacting with coaches like Cortez.

“The reason I like coming to golf class is to see my coaches, because they try their best to push me further than I would be able to go otherwise,” Palazuelos said. “I definitely want to be an SCGA Junior coach, because I want to teach little kids and be an inspiration to them like my coaches have been to me.”

These connections to the program are strong because of the community the Foundation fosters. It isn’t just about birdies or good shots; it’s about having fun, creating lifelong friendships and developing life skills.

Through it’s programs, the Foundation creates a safe and inclusive community where all kids are welcomed and where they can thrive on and beyond the course. The glue that binds it all together is the coaches. Coaches are trained in positive youth development to ensure that youth are developing as people before golfers. 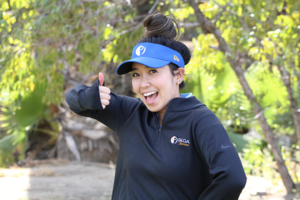 As Le says, coaches have lots of little eyes on them watching what they do and lots of little ears that are listening to what they say. Strong role models in coaching roles is a critical component of the Foundation’s programs.

“It’s a huge privilege to be a role model to our kids and to be there for them as their coach and as their friend,” Le said.

Alumni like Cortez, Fesler and Le are the new generation in their communities, allowing more and more juniors to see what is possible for people who look like them and come from the same neighborhoods.

It’s a dynamic that even works on a family level. “My little brother just started in the program,” says Cortez, “and even he says, ‘I want to be a coach just like you!'”