It took 11 years and 228 starts, but Ryann O’Toole finally found the winner’s circle on the LPGA Tour this past August. At a course in Scotland, no less. The San Clemente native and UCLA grad won the Trust Golf Women’s Scottish Open at Dumbarnie Links, a course that opened in 2019 just south of St Andrews, by three strokes, fulfilling a goal formed when she started playing the game 21 years ago.

“It felt like a dream,” said the 34-year-old of her win. “I thought, Is this real? Did it really happen? That feeling was unlike any other feeling. It was everything I imagined and more.”

The grind of a professional golfer’s life — endless practice sessions, countless hotel rooms, time away from family and friends — took a toll over the years, but O’Toole, who lives in Scottsdale, Ariz., persevered.

“Did I ever imagine it taking this long?” she asked. “No. But at the same time we can’t always control our destiny. We can only do the best we can to put ourselves in position. I just kept believing, and I have a team that never stopped believing in me.” 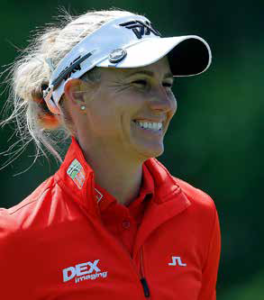 Over those 11 years, O’Toole did experience some degrees of success: She played on the 2011 Solheim Cup team, had 12 top-10 finishes and earned more than $2 million in prize winnings.

“The last couple of years people were telling me, ‘This will be your year,’” she said. “This year I could tell it was coming. I was playing consistent golf, and I was chiseling away at it. I kept getting top 20s, and then I wanted a top 10. Then I was like, forget the top 10, let’s get a win.”

Entering the third round in Scotland five strokes behind leader Ariya Jutanugarn, O’Toole told herself to stay patient.

“You never know what the weather is going to bring on a links course,” she said. “I just figured, let’s go out and make up some ground, try to close that gap and maybe on Sunday close it even more. Finishing that round (with a 4-un-der par 68), seeing the leader bogey the last hole, and then I’m tied for the lead (with Jutanugarn and England’s Charley Hull), that was kind of cool.”

REACHING FOR THE SUMMIT

It was also a brand-new position for O’Toole, who had never held or shared a lead going into the final round of an LPGA event. “I was more nervous on Saturday night than when I teed off on Sunday,” she said. “I kind of got the nerves out of the way and focused in. Sunday I just tried to let myself play.”

She did exactly that with a dazzling, bogey-free round of 64.

YOU MEET PEOPLE WHO ASK, ‘HOW LONG YOU HAVE BEEN ON THE LPGA TOUR?’ I WOULD SAY 11 YEARS. THEN THEY WOULD ASK, ‘HOW MANY WINS DO YOU HAVE?’ I HAD TO SAY NONE. BUT NOW I DON’T HAVE TO SAY THAT ANYMORE.”

“I don’t think I have any complaints from that round at all. I stayed very patient and waited for the birdies to come. I did really well that week staying in the moment, allowing things to unfold.”

The significance of the achievement hit her as she stood on the 18th green at Dumbarnie waiting to tap in her final par putt.

“Before I made that I was waiting and saw Gina (Marra, her fiancée, who she is marrying this December) and (fellow LPGA golfer) Cheyenne Knight just off the green with a champagne bottle. Gina had tears running down her face. It was at that moment that I knew I had won. It sunk in then.”

Immediately after winning, O’Toole FaceTimed with her mom, Dana, and dad, Jamie, who were watching back home in San Clemente.

“I could just hear the joy in their voices and on their faces,” she said. “They were just as happy as I was.”

A few weeks after her win, O’Toole, who had come into the tournament entertaining thoughts of stepping away from golf and starting a family in the near future, reflected on her long journey to victory.

“I know my dad said to me, ‘Look, you made a good living out there, you kept your card for 11 years, and you played pretty good golf,’” she said. “But I always wanted that win. I want multiple wins. I never lessened the amount of practice I put in, I just got smarter with what I did and kept growing my game in general. I also stayed fit and injury-free, which also helps.”

The victory eliminated a frustrating question that she would get asked far too often.

“You meet people who ask, ‘How long you have been on the LPGA Tour?’ I would say 11 years. Then they would ask, ‘How many wins do you have?’ I had to say none. But now I don’t have to say that anymore.”

And she’s not quite done, either.

“This is just one hill that I finally reached the top of. The mountain is still there. It still exists. I’ve always dreamed of being No. 1 in the world. Will I ever get there? I don’t know. But I’ll go down trying.”