A golf tournament yields one winner, but if you look hard enough and, in many cases, away from where the TV cameras are pointed, you’ll find victories in many forms. One came in the gloaming of a cool, clear Saturday on the storied bluffs of Pebble Beach. Patrick Cantlay, the former UCLA golfer and Southland Wunderkind, made the cut.

It wasn’t the first cut Cantlay had made in a pro tournament. It wasn’t his first pro tournament, or his lowest score with the big boys. And he needed binoculars to see third-round leader and eventual-winner Jordan Spieth 14 shots ahead at minus-17.

For a 24 year old who seemingly had the world of professional golf in his hands in 2013, who practically dripped potential and lasted an eye-opening 55 weeks as the world’s No. 1 ranked amateur, who shot 60 as an amateur on the PGA TOUR, making the cut seems like a very small hurdle, indeed.

It was a breakthrough, nonetheless. It was Cantlay’s first pro tournament since November 2014. What stands out is that after suffering a stupid double-bogey on the par-5 18th (his ninth hole), Cantlay racked up three birdies and six pars on those notoriously sloping, bumpy, soft greens, including a par-birdie finish on Pebble’s brutal eighth and ninth holes.

“Yeah, I just tried to keep my composure and do it one shot at a time,” said Cantlay with all the excitement of a man opening junk mail. “There have been some low points, some very tough times. I don’t know if I’ve always been patient. I guess I had to learn what it’s like to be patient.”

All this on a day in which he had to wake at 4:30 a.m. to get ready to finish his second round on the tough Spyglass layout because Thursday rain had stopped play. He completed his second round with a long birdie putt to get him to 1-under, right on the projected cutline.

“In my life, I have worked with thousands and thousands of juniors, some of whom we have been able to develop and some who made it all the way onto the pro tours,” said Jamie Mulligan, the PGA professional at Virginia CC in Long Beach. Among those pros who have come out of Virginia CC are John Cook, Paul Goydos and Max Homa, to name but a few.

“At an early age,” Mulligan continued, “you could see Patrick was tracking for greatness. He had a high learning curve and he has been winning at every level. When we would introduce players in tournaments we’d read their bios. Most are a paragraph or two. Patrick’s bio is pages long.”

Winning four times as a UCLA freshman in 2011 brought Cantlay the Haskins Award as college golf’s best player. That summer his game went into the stratosphere. He finished as the low amateur at the U.S. Open at Congressional CC. The following week, Cantlay recorded the lowest round in PGA TOUR history by an amateur when he shot a course record 60 at the Travelers. 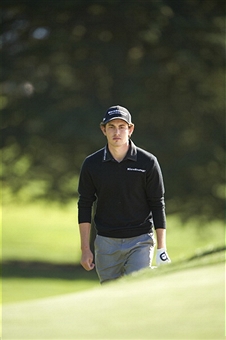 It continues: Low amateur at Tiger’s Wood tournament, the AT&T National, finishing 20th. Then first in the SCGA Amateur at San Gabriel CC, low amateur and a ninth-place finish at the RBC Canadian Open, then losing in the finals in the storied Western Amateur and then again in the U.S. Amateur finals to Kelly Kraft. Of course, the U.S. Am finish enabled Cantlay to play in the 2012 Masters, where he finished as low amateur again.

“I do not know anyone that has as much single-minded focus to get to where he wants to be,” said his father Steve Cantlay.

Friends and coaches have described Cantlay’s personality as “introverted.” Father Steve sees another side, and one that works for him in his pursuit to succeed in golf: Stubborn. A family legend came to be when Patrick was 6, at the house of his grandfather, known as Big Pat. The house had a putting and chipping green in the backyard.

After being asked by his grandparent to stand to the side, Patrick moved to the rear. Big Pat didn’t like that. Patrick had to stand to the side in the sun on a warm day until he apologized to the elder, who continued his short game practice. After a while, Patrick came up with various reasons why he should be able to go into the house.

“Big Pat agreed as long as Patrick said he was sorry,” Steve Cantlay said. “But Patrick dug in his heals not wanting to. At one point he asked Big Pat if it really was necessary for him to say ‘out loud’ that he was sorry, asking big Pat, ‘Papa can I just think it?’ About an hour or so, finally, almost under his breath, Patrick said ‘Sorry’ real quick and ran into the house.”

Cantlay started working with Jamie Mulligan at age 7 at Virginia CC. Mulligan could see right away that Cantlay had great talent. Moreover, he was willing to put in the work. “It’s just the way he behaves,” Mulligan said. “Our goal was to make him the best he could be. But it’s hard to be great when you have to do all the things needed to be great. But with Patrick there’s always been measured improvement in every phase of the game.”

Improvement stopped, however, in May 2013. Cantlay’s back flared up. The diagnosis was a stress fracture in the L5-S1 vertebrae. What followed tested Cantlay. There was lots of frustrating time waiting and hours of diagnosis and all kinds of therapy, but no relief. “We went to 40 or 45 doctors,” Mulligan said. “We’ve been through so many physiotherapists. Our focus was to get his body healed but it wasn’t perfect. It took time.”

For the first time since before he was a teenager, Patrick Cantlay, who arguably came out of the amateur ranks as California’s most talented competitor since Tiger Woods, had to consider the possibility that professional golf might not be his calling. All those trophies, all the honors were sliding deeper in the past, and he even considered returning to college.

In February 2016, just when it seemed his health might have turned a corner, doctors told Cantlay he had to take at least another year off. It was disheartening, to say the least. One night, Cantlay and long-time friend, Chris Roth, decided to make a 1 a.m. walk to Woody’s Wharf in Newport Beach. Here’s how a story in the Orange County Register reported what happened:

“…If anyone could cheer up Cantlay it was his caddie and longtime friend, Chris Roth. They had been practically inseparable since they were members of the Servite [High School] varsity golf team….

“Roth was walking about 10 feet ahead of Cantlay as they got to the intersection of Newport Boulevard and 30th Street. As Roth started across the street, a hit-and-run driver smashed into him, sending him flying through the air to the other side of the intersection.”

Roth, 24, was pronounced dead. Years earlier they would sit in their high school coach’s office talking about how Roth would be the Jim “Bones” MacKay to Cantlay’s Phil Mickelson, a decades-long, successful caddie-player bond. Cantlay spoke at Roth’s funeral, and it seemed to change him. He refocused on golf.

“The struggle with his back and the tragic loss of losing his close friend and caddie has certainly forced Patrick to call on all of his mental strength and determination to get back to the PGA TOUR,” Steve Cantlay wrote via email. “And without question he is not nearly happy with just getting back for one tournament. He wants and expects to be competing at the highest level. I believe he will get there in time.”

“Golf at this level,” Mulligan said, “is mentally draining and physically draining. The thing we’re most happy about is at the end of the week at Pebble Beach he felt comfortable in his body. His body did as well it could be expected in his first tournament back. But he’s not going to be satisfied unless he gets the max result.” 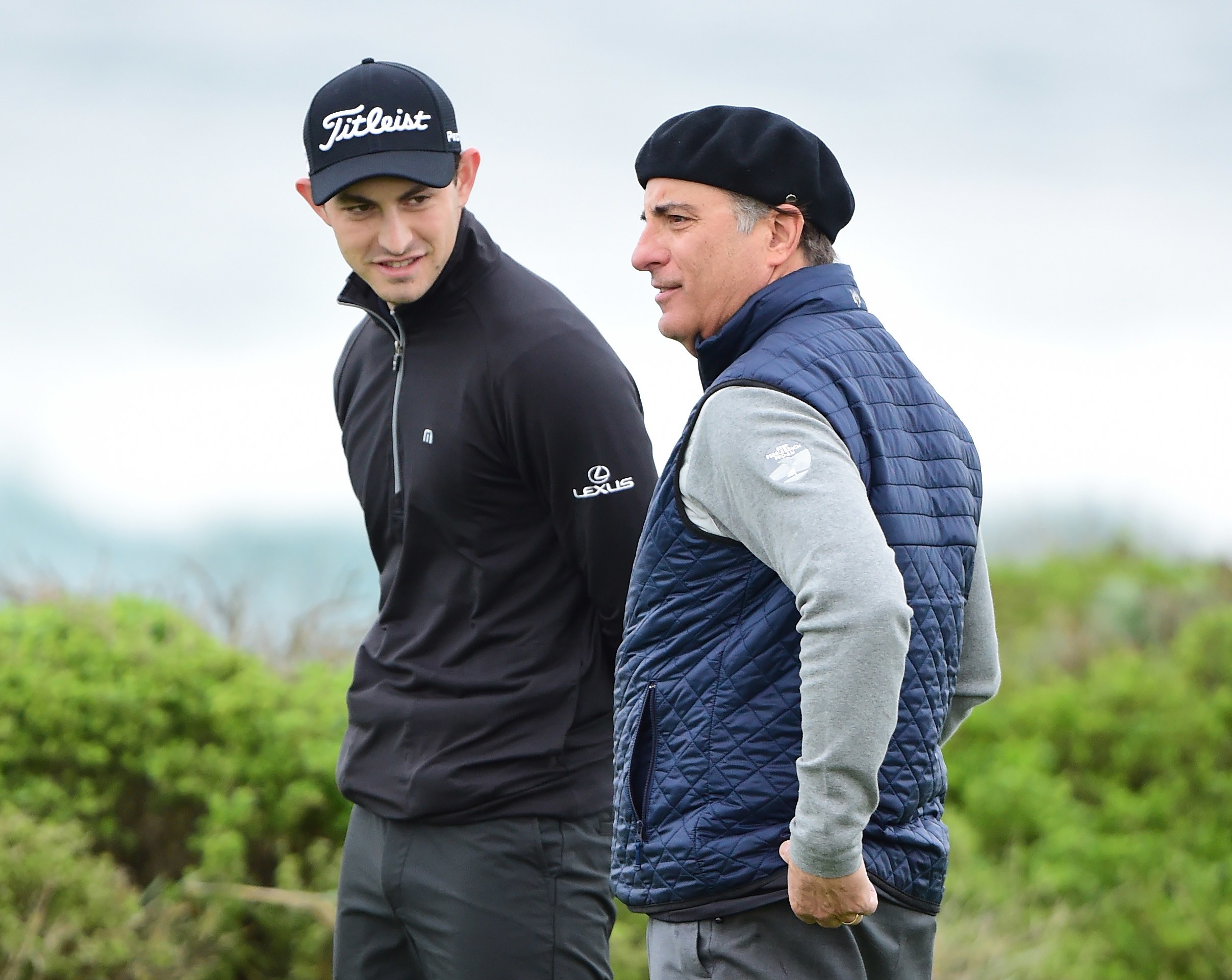 The AT&T Pro-Am is hardly the best place to resume one’s pro career. There are three courses to study, each with different characteristics. This year’s drenching rains left them squishy, muddy and slippery. Casual walks to elevated tee boxes and down fairway slopes were opportunities to slip and get injured – the sort of place not well suited for someone with back issues. Throw in the cool temperatures, and all eyes in the Cantlay camp were watching. He’s playing on a Medical Exemption, and has 10 more entries into PGA TOUR events this year.

“There’s a lot of stuff I have to do to get ready to play,” Cantlay said after finishing in the dark at Pebble Beach. “There were some good positives and I made some mistakes.”

The small greens get so much foot traffic that indentations from the spikes often knock putts off line. Two-footers made pros tremble, but Cantlay calmly made all his two-putt pars despite the unnerving conditions on the greens. That calmness carried over afterward. Cantlay acted like he’s supposed to make the cut. In fact, he’s supposed to do well on the TOUR, and if his body lets him practice and hone his skills, he’s supposed to win and win soon.

“I love it out here,” Patrick said. “It’s been far too long since I competed. It took a lot of hard work. Glad to make it back.”

How’d he hang on when he was near the cutline having to play two of the toughest back-to-back par-4s in the world?

“It’s fun. I love the competition,” he continued. “That’s what I want to do. It’s what I prepare to do every day. I’ve been playing well. I never felt my game has been an issue, at all. I’m just trying to get healthy and feel good enough to play. It’s been nice that I’ve been able to work hard on my game.”