In 2015, Tony Manzoni, the head golf coach at the College of the Desert, coasted past the half-century mark of PGA membership, a rare feat that dates to his beginnings with the association in 1965. Today, the sentry of Palm Desert golf evidences little lag as he enters his 52nd year as a celebrated member of the world’s largest sporting organization.

A part of five junior college state titles and 28 conference championships as the Roadrunners’ front man since 1994, Manzoni has also served as professor and advisor with the college’s Golf Management program for better than three decades. Manzoni was also instrumental in the fundraising for and building of the school’s College Golf Center, the valley’s epicenter of public ball-banging and instruction.

“The game molds young people, but it also takes care of the old, just allowing people to get out in the fresh air and play a few holes,” Manzoni says. “Golf is really an elixir for the whole community, and it needs to be presented that way. The number one thing, no matter who your student is, you must give them hope. I work with young people, older people with disabilities and fledgling kids that have dreams of playing on TOUR — but you’ve got to give them all hope. We get emotional about teaching and sometimes you can sound critical; and if you hit ‘em wrong with your voice, you can lose them. So I’ve really, really worked to be as patient as possible.”

An original co-founder of Callaway Hickory Stick (which became Callaway Golf), Manzoni equates the delicate building of a golfer with the studied construction of a club.

“Doing things in ‘baby steps’ is so important, and not trying to give a student the whole book at once,” continues Manzoni, who authored his instructional memoir, The Lost Fundamental, in 2010. “It’s easy to do that, because when you’re enthusiastic and passionate about teaching, sometimes you say too much. It’s always important to ask the student the question, ‘Do you understand what I’m saying?’ I think it’s human nature, maybe there’s a little cell in us, but when explaining something to a student, they never say, ‘Well I don’t know what you mean.’ In over 50 years of teaching golf, nobody has ever said that to me. You need to pull that out, to ask them.”

With time, comes wisdom. “I think there’s a point in time where you have to accept your golf swing,” he says. “And then focus on your attitude while playing and managing yourself on the golf course. The more you beat yourself up, the harder the game is.” 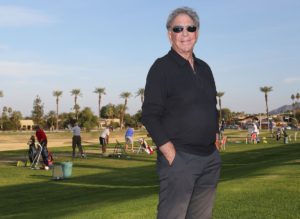 Across the fairways of time, Manzoni has teed it up with links legends and silver screen celebrities, playing rounds with the likes of Ken Venturi, Joe Pesci, Greg Norman, Don Rickles and the (now) King of Morocco. Yet, across his breadth of playing partners and successful students, it’s the smaller set which plays closest to his heart.

His greatest accomplishment in the game? Manzoni is fast to point to his work with SCGA member Jiyoon Jang, a graduate of Palm Desert High and now a freshman member of the University California, Berkley women’s golf team.

Under Manzoni’s tutelage, Jang went from a 13-year-old golf nascent to a T-15 in the stroke play portion of the U.S. Women’s Amateur Championship just three years later. In 2015, she received the recognition of being named an AJGA Rolex All-American Honorable Mention.

“She was somebody who didn’t want to play golf, hated the game, to what she’s become today and going to Cal on a full ride,” smiles Manzoni. “It’s brought tears to my eyes to be a part of that, and she’s become like a family member to me.”

Teaching kids and junior talent (oftentimes for free) is what Manzoni feels is his lasting contribution to the game. “With juniors, it’s always about access,” Manzoni concludes. “And here in the desert, access isn’t always the easiest thing. We’ve got well over 100 golf courses out here, and I’ve always thought that every golf course out here needs to holds a tournament for juniors, sometime during the year. That would be so fantastic. Can you imagine some of these high-end clubs getting behind that idea? They could make it glorious for the kids.”