Unlike Ripken, not many people outside of Saticoy CC in Somis know Bob Roth, but the 86-year-old Moorpark resident marked his own longevity milestone on March 8 when he played his 10,000th round of golf.

Friends and family from around the country gatherd at Saticoy to mark the occasion with a small golf tournament. After golf, the group gathered for a celebratory feast where all of those invited will wore special T-shirts to honor the occasion.

The event was organized by Roth’s wife, Delores, whom she met when they were in seventh grade. The childhood sweethearts will celebrate their 65th anniversary this year.

“It was a wonderful day,” Roth said. “Getting a chance to play my 10,000th round with my two sons (Jeff and Stuart) and my grandson Justin was really nice. After golf we had some great food and shared golf stories so it was a really great event.”

The most emotional part of the day came when his son Jeff, who is a a longtime PGA teaching professional, read a letter that the PGA of America sent to his father talking about his amazing accmomplishment.

“Both Bob and Jeff got a little choked up as the letter was being read,” Delores Roth said. “It was very touching.”

Having been introduced to golf by his father when he was very little, Jeff Roth was thrilled to be on hand to celebrate his dad’s remarkable achievement.

“As a 35-year PGA of America professional, we are tasked with growing the game,” Jeff Roth said. “Dad is the poster boy for any ‘growing the game’ program.

“He is an inspiration for young golfers of what the game has to offer and a motivator for us older golfers to keep enjoying the journey of playing such a great game.”

Roth, who has been a Saticoy member since moving to Ventura County in 1984, is looking forward to the event, not because of being in the spotlight, but because it gives him a chance to share something he loves with the people he cares about. 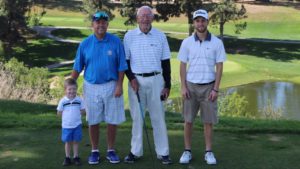 “I like the camaraderie (of golf),” Roth said. “Golf is bond for me and my son and others in my family. I am not someone who goes to the gym, but golf gives me chance to get out and walk and move around and stay physically active.”

Longtime teaching professional Lee Martin, who was the head pro at Saticoy when Roth joined the club, said Roth is the type of member that club professionals really like.

“He never criticized club staff to other members, and if he had any criticism it was constructive to the department head,” said Martin, who joined Roth for his 10,000th round. “He participated in club events and loved team play.

“He plays by the rules and he obviously played a lot. He probably played over 20 times a month but stepped aside on the weekends for members that worked during the week. Golf would be much better if all members conducted themselves like Bob Roth.”

Roth played his first round of golf in 1947 at the age of 15, when playing another 9,999 rounds was the furthest thing from his mind.

At the start, Roth didn’t think too much of the game. He and his friends were too busy playing baseball, basketball and football.

It wasn’t until eight years later, while he was a student-athlete at Arizona State University, that Roth found his passion for golf.

His wife’s brother, Tony Loncaric, came for a visit and brought his golf clubs. The two went out and played a lot of golf during his visit. Unlike his first exposure to the sport, Roth was taken by the challenge of the game.

Roth wanted to chart his progression. Each time he played he wrote down where he played, his score, and some statistical information about each round on a piece of notebook paper.

Roth excelled in baseball and basketball, showing enough skill to earn a basketball scholarship to Northwestern University, where he played for two seasons.

In 1953, his schooling and athletic career was put on hold when he joined the Air Force, spending two years in the military.

When he left the military in 1955, Roth received a scholarship to Arizona State, where he played basketball and baseball.

Roth showed enough promise in baseball to receive a contract offer from the Boston Red Sox. Roth declined the offer, and never told his wife about it.

“I was so mad he didn’t tell me,” Delores said. “We had been married three years and had no kids so I would have told him to try it.”

Born during the Great Depression, Roth said the experience instilled in him a sense of practicality. Instead of chasing a baseball career, he took a job with the Aetna Life Insurance Company, where he worked for 32 years before retiring.

Roth was working for Aetna in Michigan in 1984 when the company asked him to transfer to Southern California.

Coming to a warmer climate gave Roth a chance to play golf year-round. He joined Saticoy Country Club, which gave him a perfect place to hone his game.

When he retired in 1988, he started playing four to five times a week. The rounds started to accumulate and when he reached 5,000, his quest to get to 10,000 intensified.

Thursday’s round will be his 6,373rd round at Saticoy — roughly 63 percent of his total.

His best score at Saticoy is 71, which he’s done twice, and at the height of his playing days he got his handicap down to five. He’s had two holes in one — one on Saticoy’s ninth hole and the other at No. 13.

His most memorable round at Saticoy was when he was 74 and shot a 73, one shot lower than his age.

“We got to 18 (a par 5) and I needed to make a par to break 74,” Roth said. “I hit two good shots and then my third shot (went) to the back of the green. I managed to lag a putt down to within three feet and made the par putt.”

Since that time, Roth has recorded a round at or below his age a remarkable 71 times. He recently figured out that his 9,999 rounds have been played at 517 different courses around the world.

His favorite stop is the famed Pebble Beach Golf Resort in Monterey. Among Roth’s other top five places he has played are Pinehurst No. 6 and 8 in North Carolina, historic St. Andrews in Scotland (where he’s played six times), and Royal County Down in Ireland.

“The other course in my top five would have to be Saticoy,” Roth said. “It’s a great golf course and it’s got a great group of members.”

Roth is basically self-taught but he has gotten a few pointers over the years from first his brother-in-law and then his son.

While Thursday’s round will be incredibly special to Roth, he had an equally special golf experience two weeks ago when he played a round with his son Jeff, his grandson Jeffrey and his great grandson Bryson.

“It was a four-generation foursome,” Roth said. “We played nine holes and Bryson just hit shots here and there, but it was so special to be able to be out there with four generations of my family.”

Once his 10,000th round is in the books, Roth said he’ll play without a specific target number in mind.

“Maybe 10,500, but I just plan to go out and enjoy however many rounds I end up playing,” Roth said. “Getting to this point is more than I could have imagined.

“I was told early in playing days, this is a sport you can play a lifetime. They were right.”

Start catching up to Bob’s tally by playing in a Member Outing. We advise you get a move on!