Surf & Turf Apparel is Dressing Golfers With a New Thread

A budding golf apparel company is threading through the fabric of SoCal turf with a unique needle.

Coachella Valley-based Surf & Turf Golf is made by pro golfers and designed for everybody – both on and off the course. And while the brand’s coast-to-coast concept of crafting golf-driven lifestyle apparel attire may not be the first crossover concept of its kind, Surf & Turf’s organic business model, communal intentions and drive toward altruism make it a unique company for any industry.

Between a network of (unpaid) brand ambassadors against whom Artman has played over the years, combined with a myriad of club pros with whom both he and Knickerbocker have long crossed fairways, Surf & Turf has slowly, but certainly, started to see it collection of hats and shirts spread across the country.

“That network has been huge,” says Knickerbocker, an assistant golf professional at Bermuda Dunes Country Club. “You’re not just some random guy off the street; they’ve met you at a tournament or a meeting or somewhere along the way in golf, so there’s some credibility there and we’ve already got a foot in the door.”

Entering mid-spring of ’18, Surf & Turf’s modern, playful logo of a surfboard crossed with a flagstick has augmented to about 200 brand ambassador (both touring pros and head club professionals), with the attire now placed in over 60 pro shops and stores across the country. 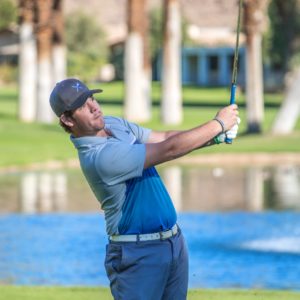 And while the Surf & Turf boys know that paid sponsorship opportunities for their connections will usurp players wearing their gear on-course, a host of pro golfers — Brice Garnett, Abraham Ancer, Taylor Gooch, Jonathan Randolph and Kendall Dye to name a few – all sport and support the brand.

“The extended network has been the biggest thing,” adds Artman, who splits time between Texas and Palm Desert. “There are guys out there on the road, they’ll know a head pro at some course and they’ll take ’em a couple of hats and a catalogue and see what they say. You start knocking on enough doors and suddenly you start getting in.”

And Artman knows something about the road. While currently dealing with labrum and shoulder injuries, the former NAIA second team All-American has spent time some time working the world’s fairways, swinging the golfer’s nomadic lifestyle between the Mackenzie Tour-PGA Tour Canada, South Africa’s Sunshine Tour, the Adams Tour and the Golden State Tour.

“Throughout the journey, you always have it in the back of your mind, ‘What’s after golf?'” Artman says of the career crossroad between threading a wedge to designing a shirt. “I knew what I wanted to do, but I was unsure when that opportunity would come. Now, I see that light at the end of the tunnel; that there is life after golf. But it would be foolish to quit playing; in part because that network is what’s help us spread.”

At a time when the game and its leadership seems opaquely caught between honoring traditions and finding ways to bring in new players, Surf & Turf’s genuine exuberance for bring people together through golf seems to come at an ideal time.

“We think that the traditions of golf should always remain,” Atman continues. “But with the rise of things like Topgolf, and trying to bring in a new demographic, this fun factor – if you’re going to grow the game, then golf needs to adapt to that. For our brand, some of it fits in with traditional golf, but it also fits in off the course; hey, there are some public courses where you can wear t-shirts, and I think the game is moving that way.”

And while spreading the threads, Surf & Turf’s vision extends beyond being the next John Ashworth (not that they’d mind his success). As evidenced via its official, SCGA member club, the brand’s philosophy of inclusion and creating relationships is on par with selling shirts. 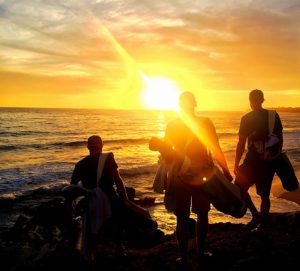 “We see the Surf & Turf Club portion of this as a way to create a golf community, to get all these people playing golf together,” Knickerbocker says. “It’s something bigger than walking in a PGA Tour Superstore and buying a Nike shirt just because you like the way it looks.”

From daily duffers rounds to mini tour connections, the Surf & Turf crew is starting to see its perspective shared.

“I hope the Club grows, which is really the vision through the brand,” Artman explains. “There are all these guys I’ve played college or pro golf with, or against, and they didn’t know each other. And now it’s cool to see these players meeting at events – and they’re wearing Surf & Turf – and they make this connection; whereas, before, maybe they were on opposite sides of the range, they never would have played together, they went to different college, are different ages – and now we get these pictures all the time of four of our ambassadors playing a round together. And that could be anywhere from North Dakota, to Texas to here in California.”

Such a communal vision of the game is further evidenced by the brand’s philanthropic efforts. On the eve of this year’s grab for the Green Jacket, the company held its second annual Surf & Turf Masters; hosted at a par 3 course, the youthful gathering of music and beer and tacos was encircled by the earnestness of raising funds sent directly to a close friend of the brand who has long battled brain cancer.

Preceding the tournament, Surf & Turf announced its new Course to Cause for a Cause initiative, in which the company will now donate five percent of its online sales each month to a “Champion” in need of funds.

“We knew that we wanted to give back, and Taylor was really the one who came up with our new 12-month program, where we can give these donations directly to the recipients,” Knickerbocker says.

Golf is in need of such vision, where a shirt means more than just a logo and a player is a person.

“The more opportunities to reach people, to have that chance to effect more lives – I think you have to play a hand in that if you can,” Artman concludes. “So many people want to make an impact, but they may not have that microphone to do it. If we can grow, if we can reach more people, grow this community and use our apparel as a mission to lead the way, it could lead to other people following suit. The impact could be countless; it could be incredible.”