Profiles
Home›Profiles›Mike Trout: From the Batting Cages to the Links

Mike Trout: From the Batting Cages to the Links

Mike Trout started to take his golf game seriously when he became a professional baseball player.

Trout, the star center fielder for the Angels, and his teammates had a lot of afternoons free during spring training in Arizona and his game blossomed playing at least four times a week.

In March, he was playing at Raven GC in Phoenix and used a 56-degree wedge shot on the par-3, 127-yard second hole. The ball one-hopped the green and bounced into the cup for his first hole-in-one.

The 25-year-old Trout celebrated with his fiancee, Jessica Cox, and his playing partners. He called Angels pitcher Garrett Richards – his roommate and usual golf partner – to shout the good news.

“We were really excited,” Trout said. “I couldn’t believe it at first. Walking over and picking up the ball out of the hole was pretty cool.”

And Richards got to see Trout – the reigning MVP of the American League – pick his golf ball out of the cup live.

“He was FaceTiming me running down the fairway,” Richards said. “When he went to pick the ball up, the phone was bouncing up and down.” 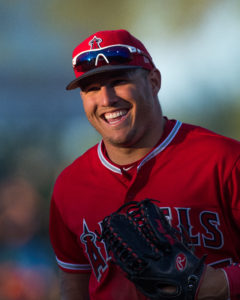 Trout got to keep the Raven flagstick and has the ball from that ace in a shadow box. Aces are usually the product of a good shot and a little luck, but Trout’s athletic accomplishments – he can dunk a basketball, too – are so many that luck doesn’t seem to play much of a role. He works hard at baseball and golf. He plays to a 6 or 7 Handicap.

Trout has done so much in his baseball career, already having hit 175 home runs in his young career. He’s hit for the cycle and made ridiculous over-the-wall catches. But getting that first career hole-in-one is now among his most prized athletic accomplishments.

“It’s something every golfer wants to do,” Trout said. “I know a lot of people who have been playing golf for a while who haven’t gotten one. I know a lot people who’ve gotten a few. It’s one of those special moments, like hitting a walk off in baseball or making an unbelievable catch.”

Trout, who is from Millville, N.J., started playing golf with his dad, Jeff, as a kid. Ironically, his dad just recorded his first hole in one, about a month after Trout got his first. Jeff Trout had a hole-in-one in April at Running Deer GC in New Jersey.

Jeff Trout is a former professional baseball player as well, having reached the Double A level in the minor leagues. Sports are in the Trout family DNA, and golf rounds are a fun father-son activity.

“He got me into it,” Trout said. “Now he’s playing almost every day since he’s retired. He enjoys it. It’s good for him to get out there and play. He’s getting better.”

Millions can watch Trout do his thing hitting baseballs, but Richards has the good fortune of being able to watch Trout’s exploits on the golf course.

“It looks like he barely swings and he hits the ball an absolute mile. He kills it,” Richards said. “It’s just fun to play with him. He doesn’t take it incredibly seriously. We have fun.”

Richards is amazed at how quickly Trout is able to learn new shots, and he’s watched those improvements playing with Trout the last five years.

“He ended up watching a Youtube video on how to hit a draw shot. He watched the video and would go to the range two or three times after that,” Richards said. “After the second or third time, he knew exactly what he wanted to do with the golf ball.

“His hand-eye coordination and his ability to make adjustments is pretty quick. He learned from the video and then started explaining it to me. I started hitting it better. He went from shooting in the 90s to the 70s within like one spring training.”

Richards and Trout usually play golf together in the mornings on off days during the season. They like to play at Pelican Hill and Strawberry Farms among other SoCal courses. Trout likes Torrey Pines, too. They mix it up at different courses in Orange County, trying to get out on the course early. They also play in charity golf tournaments, like the one teammate Albert Pujols has.

If it’s just Trout and Richards, they’ll compete in match-play and put a wager on it. Richards plays to a 15 or 16 Handicap and hasn’t beat Trout yet.

“I’ve come close. I’ve been ahead several times after the front nine, and I just fall apart on the back,” Richards said. “If I’m beating him, and I’m giving it to him trash-talk wise, you see his game elevate a little bit. He locks in, turns it around. He’s fun to play golf with.”

Just like when he’s robbing someone of a home run with an over-the-wall catch or hitting a game-winning home run, Trout is always smiling and having fun on the golf course.

“I joke around,” Trout said. “If you make a good shot, you’ve got to let people know about it.”

Richards has seen him drain a lot of long putts and make some big shots.

“There’s been a few times he’s chipped in from just off the green or a few yards out. I’m more impressed with the putting,” Richards said. “There will be a putt that’s a big-time putt, and it’s almost like you’re writing a story that he would make a 40-foot putt to tie you and he does. He has a feel for the dramatic.

“If he has to hit a shot, he’ll hit it. It’s weird. If he has to make a putt, he’ll make the putt. He never misses it. You very rarely see him hit a terrible shot.” 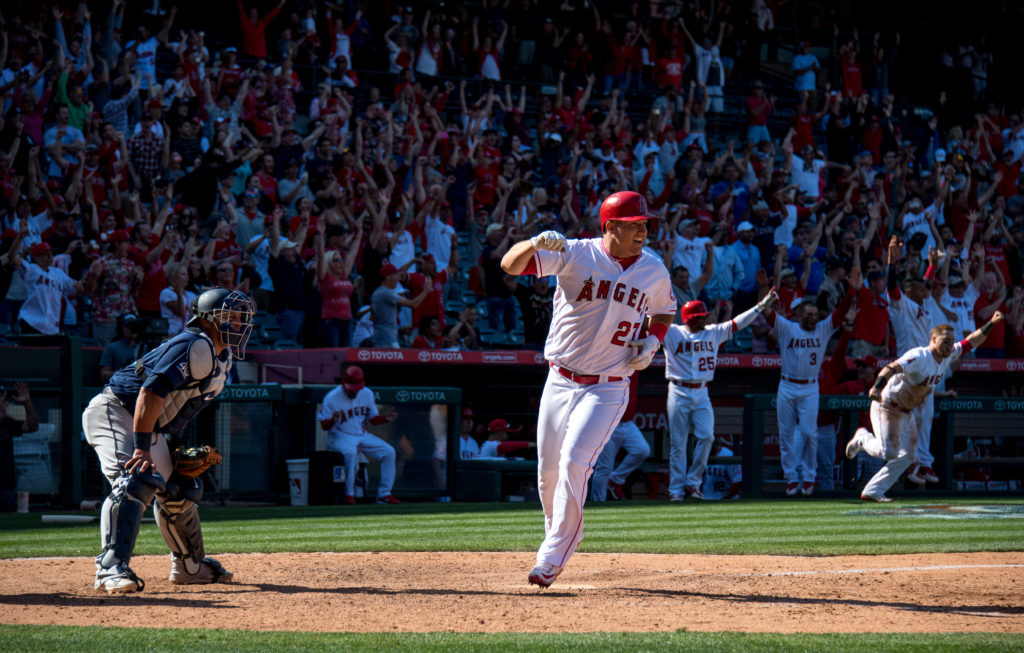 When Trout plays golf on an off day, he and Richards will usually have an afternoon baseball game on one of their phones and watch while playing. Richards is still trying to figure out how sink a pressure putt in a game with Trout.

“As far as us playing golf, we’re the same until we get on the green,” Richards said. “I’m working on my putting. He has a way, and it can be the shortest putt in the world, and he’ll rattle me.”

Richards has used the same golf clubs Pujols gave him for about four or five years. Trout likes to try all the latest clubs. Richards joked that Trout must have played with 15 drivers during spring training.

“It’s something to get my mind off baseball. Golf is relaxing. It’s fun,” Trout said. “A lot of guys play. It’s competitive.”

Trout has played a round with Phil Mickelson. He’d love to play with Tiger Woods and Jordan Spieth, too. And he and Pujols are working on trying to check off a bucket list item by playing at Augusta National.

That hole-in-one might just be the start of more things to come.