Fall 2019Profiles
Home›Issues›Fall 2019›A Winner In Every Way: Sahith Theegala

A Winner In Every Way: Sahith Theegala

After yanking his tee shot far to the left of the fairway, almost to the short-game practice area alongside the fourth hole at Lakeside Golf Club, Sahith Theegala had to make a decision. He led the course record-holder, Trip Morris, by two shots in the final round of the SCGA Amateur Championship in July, but his ball lay in scruffy rough 260 yards from the green on the par-5 and appeared blocked by tall sycamore trees 30 yards ahead. He grabbed his 3-wood, then a 4-iron, then a 6-iron to play it safe. Go for it? Lay up?

An easy call for Theegala. He lashed the 3-wood, clipped a few leaves atop one of the sycamores and put the ball just a few yards off the front of the putting surface. He got up and down for birdie, increased his lead to three shots and from there coasted to the championship by eight strokes.

It was another victory for the fifth-year Pepperdine senior who has made a name for himself with an unconventional swing and a refreshing approach to the game that looks at every situation — no matter how dire — as an opportunity.

Theegala plays golf very much his own way, the product of enormous support from his parents and extended family, a longtime coach and a college program that he has helped mold while he has evolved into a nationally known player.

Go for it or lay up? Not really a question for him. He shot a pair of 65s in the third and fourth rounds at Lakeside.

“Sahith isn’t afraid to make 18 birdies,” said Rick Hunter, PGA professional at El Prado GC, who has worked with Theegala since he first picked up a club at age 6 and won a junior world championship not long after. “I played a lot of tournament golf when I was younger, and I always tried to protect par. Sahith is very different. He likes to make birdies.”

Theegala is getting back into competitive golf after a 10-month layoff because of a left wrist injury that affected him during most of his junior year, forced him to have surgery last January and led to his taking a redshirt season. He had climbed as high as 24th in the world amateur golf rankings and seemed destined for the top 10 before the injury.

But the layoff, at times extremely frustrating for a player whose love for the game is obvious to anyone who sees how aggressively and joyfully he attacks courses, might actually have had some benefit. 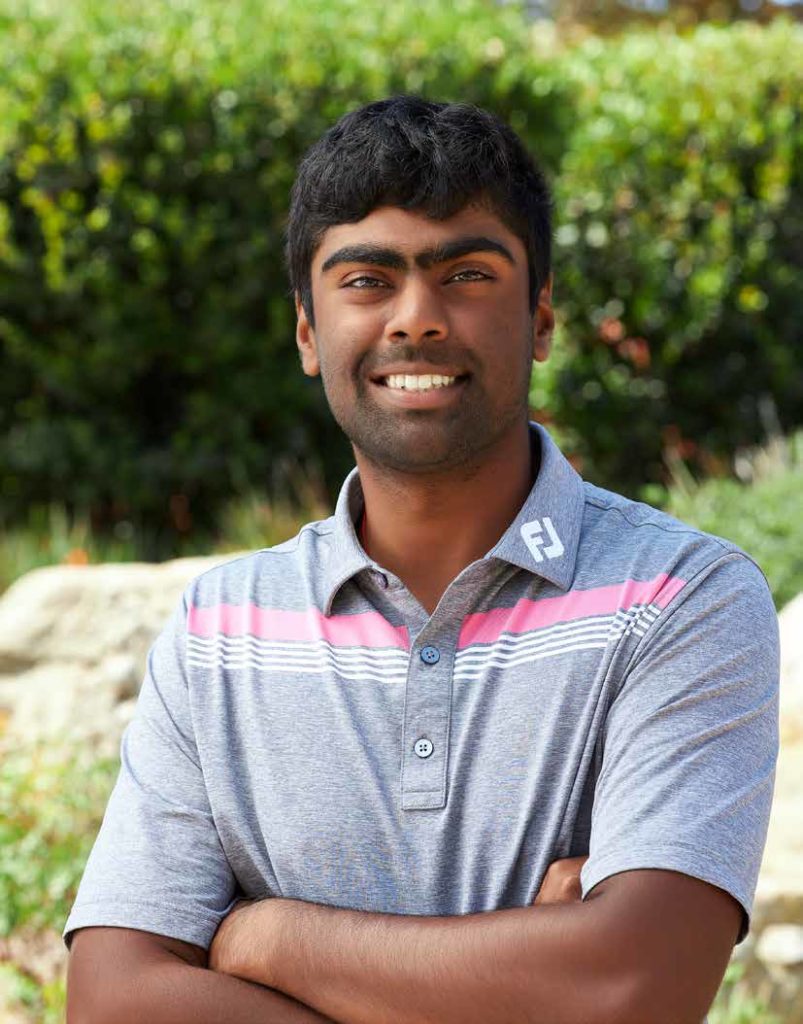 “It was brutal,” Theegala, a Chino Hills resident who will graduate in spring with a degree in sports administration and a minor in marketing, said of the 10-month hiatus. “I tried to stay positive, but funny enough, when I was starting to get healthy at regionals and nationals (last spring), it was really tough. I just wanted to get out there with the guys. But the big thing was I was able to practice my short game for so long, so my chipping and putting was better than ever.”

In June, at the Sunnehanna Amateur in Pennsylvania — his first tournament in nearly a year — he finished tied for 12th. He followed with a T-41 in the Northeast Amateur, then finished second to Highsmith at the Sahalee Players Championship in Washington before the SCGA Amateur.

HE DOESN’T GET PULLED DOWN BY THE NEGATIVE THE WAY A LOT OF PEOPLE DO. HE’S WIRED DIFFERENTLY; HE’S GREAT AT GOING WITH THE FLOW. BUT HE’S EXTREMELY WITTY AND INTELLIGENT. HE’S GOT THE PERFECT BALANCE.”

Just after that one-sided victory, he scorched the field by shooting 64-68 in U.S. Amateur sectional qualifying at Crystalaire CC in Llano, Calif. In hot, windy conditions in the high desert, he won by three to earn a trip to Pinehurst, N.C.

He then had a scare at the Western Amateur in Michigan. After he qualified for one of only 16 spots in match play after four rounds of stroke play, Theegala’s wrist flared up and he withdrew. Tests revealed no damage, so he made the trip to Pinehurst, where he advanced through medal play before losing in the round of 64.

His parents — dad Murli and mom Karuna — often follow him in tournaments and are joined by an expansive and enthusiastic group of relatives and family members, who encourage other competitors almost as much as they do Sahith. They follow Murli’s lead on bringing joy to the game.

Before a round, his father has one piece of advice for Sahith. “I don’t ever say ‘Good luck,’ or ‘Play well,’” he said. “I say, ‘Have fun.’ Why would I say ‘Good luck?’ You already did your work on the range. Just have fun.”

The advice of the father has clearly shaped the son. “When he was younger,” Murli said, “he would try to push himself too hard, and I told him, ‘Just keep playing your game. If you shoot 68 and lose, give credit to the other player. But if you shoot 68 playing your game all the time, that’s usually going to beat someone who occasionally shoots 62. Trust your game.’”

His teammates and coaches have noticed how Theegala deals with difficult situations and have tried to model the mental approach of a player who has clearly been the team leader since his sophomore year.

“He doesn’t get pulled down by the negative the way a lot of people do,” Beard said. “He’s wired differently; he’s great at going with the flow. But he’s extremely witty and intelligent. He’s got the perfect balance.”

Balance? Consider early in his junior year, in the Waves Challenge tournament, he had to play his first round with a borrowed putter; his was either misplaced or taken from his bag 10 minutes before he teed off. Many players would come unglued. Theegala muddled through the first round, then won the event by 16 shots. 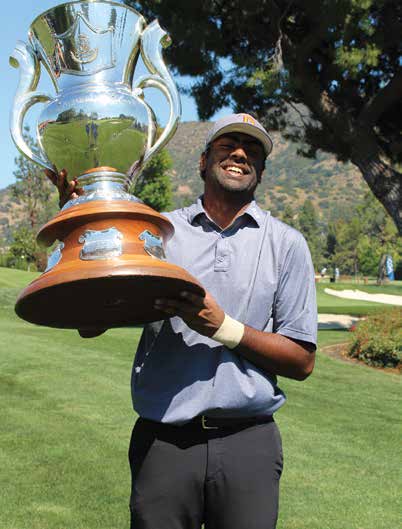 Theegala, whose career scoring average of 70.95 is the best in Pepperdine history, approaches the game with the same joy he showed as a younger player. But, in part because he’s now a known commodity on the amateur golf scene, he has cut out some of his more playful pre-match routines. The intentional shank on the range has been put back in the bag. But it’s still part of what stands him apart from the crowd.

During a tournament his freshman year, he sidled up to Jon Rahm on the range, at the time the No. 1 amateur in the world. He then intentionally shanked a ball in front of him.

“That was the greatest shank I ever hit in my life,” he said, smiling at the memory. “I was on the left side, and the ball went directly in front of the whole range. It was awesome. I didn’t look up, because I wanted it to seem like it was an accident, but my teammates said Rahm and a couple other people stopped and looked over, like, ‘Who’s this kid?’”

Theegala’s competitiveness is also tempered with a sense of adventure. His sophomore year, after he had won a tournament to get into the PGA Tour’s Genesis Open field and made the cut before finishing tied for 49th, he qualified to play in the U.S. Open in Wisconsin.

He played a practice round with Dustin Johnson and Brooks Koepka on Tuesday. The next day, Beard’s then-7-year-old son Clark, a big Green Bay Packers fan, wanted to make the two-hour trip to see Lambeau Field.

“It’s Wednesday before his first U.S. Open, and Sahith is like, ‘Well, I wanna go,’” Beard said. “He could be playing a practice round with anyone. I mean, who does that? But that’s Sahith.”
His sophomore year also offered Theegala one of his most impactful learning experiences. In the West Coast Conference tournament, while playing adequately but not up to the standard that he had set earlier in the season, he uncharacteristically threw his club after a poor wedge shot in the final round.

“Two holes later, I hit a great putt from like 15 feet and it lipped out,” he said. “I don’t know what came over me, I dropped my putter and kicked it. It almost hit the ball. I’m not one to slam my clubs or curse or anything like that. It was terrible.

“What was great was that coach pulled me over and gave me a talk. Here I am playing the sport I love, there’s no reason to be like this. I was pretty close to tears and almost couldn’t hit my next tee shot. I’d never had a coach cuss me out, but it’s great he cares about me that much.”

Beard believes he has gotten as much from his fifth-year senior as he’s given.

“Has he made me a better coach? Oh, gosh, absolutely,” Beard said without hesitation. “He’s made me a better player and coach. Everything’s an opportunity for him. He doesn’t go into anything in a negative way. So as a coach, it just opened my mind to being more opportunistic. We have a really great player who wants everyone else to be better. He’s such a winner. I’m so happy he’s back for another year.” ▪