The Penmar: An Oscar For Food

Until recently, Penmar GC — the nine-hole muni course in Venice — was best known as a popular round at a fair rate, drawing a steady stream of players from across the westside of L.A., many of whom have been teeing it up there weekly for years. Nowadays, the beloved track is making news that has little to do with golf itself, but for a thoroughly mouthwatering reason: the opening of a spanking new food-and-beverage facility — The Penmar, natch — where a venerable (and humble) coffee shop held forth for lo these many years. Gone is the era of the generic, wrinkled hot dog served in a red plastic basket — beloved as it was for many decades — replaced by an eatery worthy of veneration by finicky foodies and grizzled hackers alike.

Yes, you can still get a hot dog here, but it’s a “grass-fed beef link with grilled onions and peppers, housemade kraut and bacon.” Thanks to local legend/chef Oscar Hermosillo (known for Venice Beach Wines and Cerveteca Culver City) and a team of local investors, the scruffy coffee shop has gotten a no-expenses-spared design facelift and a menu retooling worthy of nearby Abbot Kinney Blvd. You can’t take three steps there without bumping into a bearded Google programmer in search of his daily pork-belly fix.

“I try to keep it true to what the former operators were doing,” Hermosillo said recently through an ever-present and easy smile. “If you look at the menu, I still do pancakes and eggs and everything they were known for, including great Mexican food. And also, we wanted to do a throwback to the ’60s when it was built and some of that old-school food and vibe. I still want to do a donut machine and some stroganoffs and steak Oscar and such.” 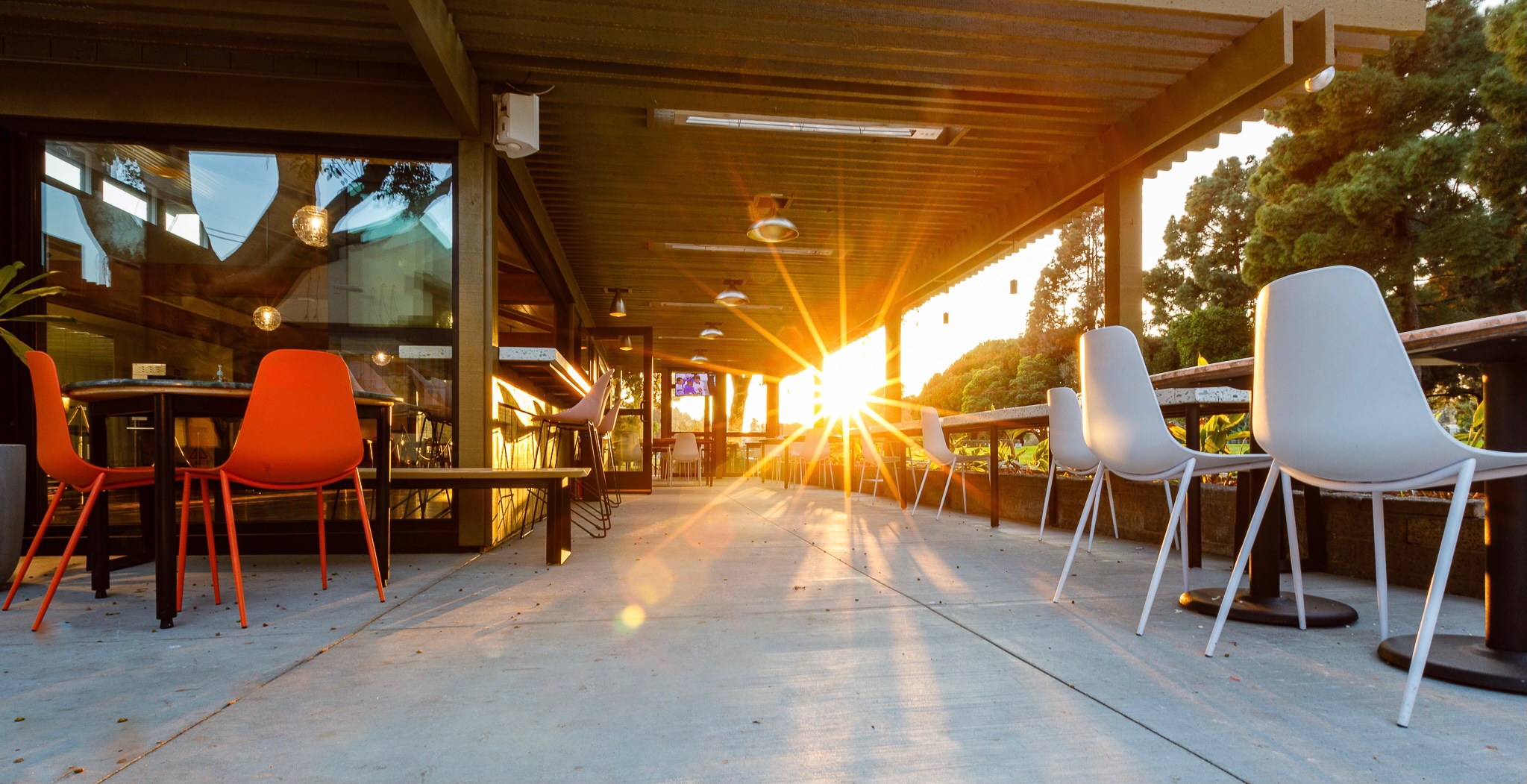 One look at the faithful mid-century modern décor and it’s evident that the homage to old-school aesthetics is not just idle lip service but architecturally correct — as if a Hollywood set designer spared no expense to recreate a 1962 diner. The Italian coffee machine checks in at a cool $25K all by itself; the golf-ball shaped lights were made by a
local artisan using “imported Swedish sand,” and the terrazzo lunch counter is embedded with brass inlays in the shape of each of Penmar’s nine holes.

Rarely does one hear mention of the words “wine program” when it comes to municipal golf course dispensaries, but The Penmar has that and six draft beers to boot, from Modelo Especial Lager

to a Dogfish 60 Minute IPA. Cans are also available for those who prefer taking sips between chunked wedges and shanked 5-irons.

As for the food, well, let it be said that locals are nearly Yelp-unanimous in their effusive praise of The Penmar’s fare, whether it’s for the generously stuffed Burrito Par Four — with a choice of fire-grilled achiote chicken, carnitas, shrimp or veggies — or the Double Patty Beef Burger, a faithful tribute to In-N-Out’s classic sandwich served with shoestring fries and available with a plant-based Impossible patty for the un-carnivorous among us.

“And of course, everything we do here is from scratch,” Hermosillo added proudly. “We’re sauce-crazy — we have three salsas and two barbecue sauces and 10 other aiolis. Even the ranch dressing is homemade, with scratch buttermilk and fresh cream. It just makes the difference. We’ve been doing it that way for years and don’t want to break the mold!”

Perhaps most importantly, The Penmar is dedicated to its unique community. “We’re here for the locals, the golfers, the neighbors, moms with strollers and people with dogs,” remarked Mark Chesler, one of the restaurant’s backers. “Ultimately, we’d like to do concerts outside, corporate events — it’s a beautiful spot: 55 gorgeous acres owned by the taxpayers of L.A.” When things return to some semblance of normality, The Penmar will be an accommodating and reasonably priced all-day facility, with outdoor tables and heat lamps, even a Santa Maria-style wood-burning grill. Nowadays, they are adhering to mandated protocols and offering to-go service with a somewhat limited menu.

And, wonder of wonders, even the traditional down-at-the-heels muni washrooms have gotten an upgrade as a nod to the extended community the restaurant now serves. Veteran Penmar golfers might think they’ve stumbled into a trendy eatery instead of a fairway-adjacent hash house …
and they’d be right.