ANA in the DNA for Rancho Mirage Restaurateur Miho Suma

Save for the victor’s famed leap into Poppie’s Pond, the most savory series of splashes during the annual ANA Inspiration (March 26 – April 1, 2018) may well occur within an intimate Japanese restaurant located five miles from the tournament grounds.

Since its debut in 2014, Shabu Shabu Zen in Rancho Mirage has fast evolved from a quaint, local gem into an experience of “major” proportions. Deriving its name for the Swish Swish with which guests manage the cooking of meat, seafood and vegetables thorough the broth of traditional Japanese hot pots, the restaurant’s first class ascent stems from the direction of its captain.

Long before Shabu Shabu proprietor Miho Suma donned an owner’s cap, the restaurateur’s attire was that of an international flight attendant for ANA Airlines. Ultimately working for ANA for 16 years, Suma’s star would rise to become ANA’s Instructor of Flight Attendants before she was promoted to an assistant manager post in the growing airlines’ Tokyo sales office.

The lauded attention to hospitality by ANA (recently listed as the No. 3 airline in the world for customer service) set the tenor for Suma’s present-day vocation.

“ANA is a wonderful company; they taught me most the important things in my life,” reflects Suma. “From the virtues and values of ethics and hard work, and also hospitality. And not just in their training, but in a day-by-day. In Japan, we call it the Sempai/Kohai, it’s the ‘Senior’ and the ‘Junior,’ and anybody who has more experience teaches the less experienced people every day. ANA is different from other companies; everybody is like your friend, all the way up to the CEO. Without ANA, I am nothing. Everything I’ve taught to my servers, comes from my lessons at ANA. I feel I have an obligation to uphold the values of the company. It’s ANA’S DNA” 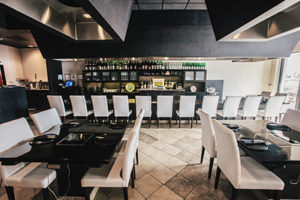 Such a work environment has helped pave Shabu Shabu’s culture of Omotenashi, the revered Japanese approach to hospitality.

And the service is well-complimented by the sake.

“I sell many different Japanese foods here, but the main thing was sake,” explains Suma, whose grandfather was the vice chairman of Japan’s Sake Association. “As I moved to the United States (in 2005) and started visiting Japanese restaurants, every single time I found that no servers, no chefs, not even owners could really explain their sake. They’d show a menu and when I’d ask the difference between two sakes, the answer would be, ‘Price.'”

As Suma considered opening her own establishment, making a key connection with a selective Japanese sake distributor proved paramount to her vision.
“It’s a commitment with the restaurants to provide the employees with knowledge of sake,” says Suma. “Many restaurants want to start these relationships, but this distributor is quite picky.
So, I was very fortunate.”

Suma’s good fortune may also be a result of the work ethic ingrained from her ANA days. The owner is at Shabu Shabu seven days a week, and spares no hands-on care with her menu.
“I decided to make everything from scratch, using my family recipes,” Suma continues. “I didn’t want to buy items that somebody else made in a factory. And I’ve found that the customer recognizes and appreciates that.”

The Gyoza starter, compliments of a recipe from her grandmother, evidences the special touch.
“You can buy them at Costco,” Suma smiles. “But my Gyoza, I cut all the vegetables (green cabbage and green onion, along with ground beef), and when I make a batch, I fold the dough, each one-by-one. It’s a lot of work, but every single time I do it, I remember the happy faces of the customers. That probably makes the difference for me.”

Suma, an avid golfer (carrying a 9.3 handicap) and longtime member at the tournament’s home site of Mission Hills Country Club, received an unexpected boost in clientele as the event was concluding its longtime sponsorship with Kraft Nabisco.

Unsolicited, LPGA players such as Inbee Park and So Yeon Ryu found their way through Shabu Shabu’s doors.

“I don’t know how they found such a small restaurant,” says Suma. “But they started coming, and they spread the word.” 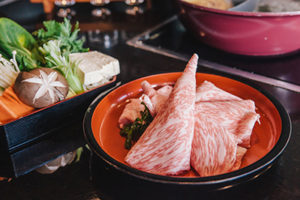 Such organic word-spreading has now found the Shabu Shabu a nexus of ANA activity during tournament week. Over time, the reservation list reads like an LPGA all-star roster, as Yani Tseng, Shanshan Feng, Na Yeon Choi and the Jutanugarn sisters have all come for the Swish Swish.

“Every single year, more and more players have been coming,” says an appreciative (if not superstitious) Suma. “For the Asian players, this is like soul food.”
In short, the place is packed across its 4:30 – 10:00 p.m. hours, with morning tee-timed players ready to dine post-round, and those with later starts looking to get in dinner before an early bed time.

And it’s not just an Eastern influence filling the intimate space anymore. European and American players (e.g., Paula Creamer) have also started to surround the hot pots during the event.

“And it’s also trainers, caddies, media. They are all coming every single day during the tournament,” Suma smiles. “It’s amazing. This has become like the cafeteria for the ANA.”

Not that the tireless Suma’s Omotenashi is limited to her work space. During the event, she brings upwards of 150 Japanese rice bowls to ANA personnel at the tournament.

“They can’t eat a hamburger every single day,” Suma laughs. “And their staff missed Japanese food.”

As for those taut hours of operation, Suma admits that opening for lunch would all but erase her own golf game. Between playing in Mission’s competitive Women’s Club and in weekly games with her husband, Suma annually hosts a group of Japanese Tour pros and Q-School hopefuls at the club’s Dinah Shore Tournament Course, host track for the ANA Inspiration.

“The Tournament Course is like a Mecca for these Japanese pros, and they are longing to play there,” she says.

But come tournament week, Suma has no time for her own play; rather, her game during the ANA Inspiration is all about ensuring a warm meal and warm atmosphere for the game’s best. And while Suma isn’t one to pick favorites, she will grant that her soul food has served her clientele well.

“Every year, and almost every single day during the tournament, Lydia Ko will come in,” Suma concludes. “Two years ago, Lydia came in the Saturday night before she’s go on to win the championship. That made two days in a row that she’d been in here, so it became like a lucky place. And last year, So Yeon Ryu came in during the week before she went on to win.”