ROBOTIC MOWERS ARE STARTING TO FIND THEIR ROLL

THE CONTINUED mesh of man and machine is coming to a golf course near you. With a strong economy’s building and construction jobs contributing to a dearth of course maintenance workers, new and emerging autonomous mowing products from Cub Cadet, Husqvarna, John Deere and others are starting to see industry shifts across agronomy circles.

“Labor is the largest crisis that the industry is facing across the nation right now; it’s very difficult to attract and retain talented individuals in a good economy,” said Jeff Jensen, southwest regional representative for the Golf Course Superintendents Association of America. “Due to the crisis, I think robotic mowers have the potential to assist us with the ongoing shortage.”

On a day last autumn, a Cub Cadet demo day of its new INFINICUT RGX autonomous green mowing system was held at Annenberg Retreat at Sunnylands in Rancho Mirage. Nearly 40 industry professionals, club managers and superintendents were in attendance.

The RGX system, in its final stages of field testing, triangulates with satellites for sub-inch accuracy using a real-time kine-matic GPS system. Usurping the specs of its autonomous predecessor, the RG3, the RGX virtually eliminates size constraints. The mower’s lithium-powered battery offers a life span commensurate with the life of the mower, and can cut approximately 50,000 square feet of green on a single charge.

“If you ask most superintendents what keeps them awake at night, big picture, it’s labor,” said Tony Whelan, the director of sales and marketing for Cub Cadet. “Can they find enough people to maintain their property? The ROI is in this; otherwise, it wouldn’t be happening. But you have to want to accept the technology.”
Currently, Cub Cadet’s autonomous mowers are being used at the Presidio GC in San Francisco and at the Santaluz Club in San Diego, among other locations.

“Sunnylands is always trying to be at the forefront, so I think this machine isn’t far off from being a reality for our operations. And I do think this is the future,” said Nicholas Hanson, director of agronomy/landscape at the Annenberg Foundation Trust at Sunnylands. “Talking to my colleagues around the desert and elsewhere, nobody has gotten back to the labor levels that they were at since about 2008. This machine might help close that gap.”
From the vantage point of its operators, the unit isn’t designed to replace man; rather the RGX is about machine assisting man.

“This allows you to deploy your resources to perform more skilled tasks, a redeployment of labor,” said Whelan. “If you asked every superintendent here, they all have that list of things they can’t get to. This mower often allows them to get to those other jobs.”

“I look at this as machine helping man,” said Andy Lindloff, superintendent at the Indian Wells Golf Resort’s Players Course. “Things are already moving that way in our industry with, say, GPS systems for sprayers and moisture meters.”

IF YOU THINK ABOUT IT, THE FIRST FOOTPRINTS OF THE DAY — WHICH, OF COURSE, CREATE INCONSISTENCIES — ARE USUALLY THOSE OF A WALKING MOWER. IT’S AN AVERAGE OF 1,600 FOOTSTEPS BEFORE THE FIRST PLAYER EVEN GETS THERE.”

A LONG WITH freeing up grounds staff to attend other tasks, autonomous tech offers additional benefits.

“Our existing customers have noted the improvements in putting surfaces, and they’re able to keep consistency of greens throughout the day,” Whelan said of the system, which rolls while it cuts. “If you think about it, the first footprints of the day — which, of course, create inconsistencies — are usually those of a walking mower. It’s an average of 1,600 footsteps before the first player even gets there.”

In concert with minimizing those foot-prints, the ability to diffuse noise ordinance encumbrances for residentially lined cours-es is viewed as a further autonomous asset.

“It’s an aspect maybe not talked about enough,” added Jensen. “Certain courses have ordinances where maybe they can’t mow before a certain hour; with these mowers, supers can potentially get an earlier start because the machines really don’t make much noise at all.” 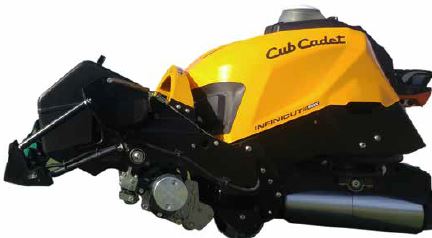 “It may still be a few generations away from it being a fully realistic possibility for a lot of clubs, because I think most guys want to be able to be in the shop, hit ‘Start,’ and then the mowers will go out and do their thing,” Hanson said. “Right now, you still need to put a body on this machine. Once they can get to a point where the mower can head out from the shop on its own, at that point, you’ll see a lot of interested people.”

Trust in the end result seems to be a critical factor.

“With the technology still being newer, I think we have to see more demos, more hours before, at least for me, I could trust a machine with my greens,” said the Players Course superintendent, Lindloff. “Putting surfaces are what make or break us as superintendents, so trust in us is already subject to waver every day. But we need to start thinking this way. I think this is a tool in the tool box eventually.”

A Pleasure, Win or Lose