THE DISCOVERY OF GOLD in California’s Sierra Nevada foothills southeast of Sacramento in 1848 inspired a horde of fortune hunters to “Go west young man” in an attempt to cash in on the shiny nuggets. They became known as 49ers and the small towns that grew in their wake were infamous for the freewheeling lifestyle of the men who inhabited them. Even Mark Twain made a visit to the area in 1865, during which he scripted his famous short story, “The Celebrated Jumping Frog of Calaveras County.” 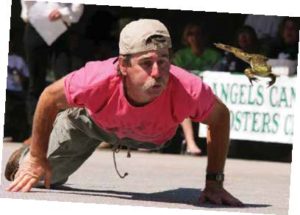 The tale Twain told is brought to life each year at the Calaveras County Fair & Jumping Frog Jubilee (May 16–19, 2019), a spectacle intriguing enough to jump in the car and head up Highway 49 to explore this lesser-known part of California. If you’re so inspired (and who wouldn’t be?!), you can rent a bullfrog from a “Frog Spa” that is set up during the four-day fest and jump it in the competition! Winners receive a brass plaque in the Frog Hop of Fame along with an impressive trophy and cash prize.

But don’t forget to pack your golf clubs. Bookended by the Central Valley on the west and the Sierra Nevada on the east, in recent years Gold Country, as it is known, has experienced an increasing surge of visitors for outdoor adventure, wine tasting, culinary indulgences and exploring quaint towns sporting frontier storefronts and wood-plank sidewalks. And though this gilded region may not pop up on the radar as one of California’s high-profile golf destinations such as Palm Springs or Monterey, the Mother Lode boasts a glittering lineup of courses to push the needle on the Golden State’s golf junket meter. 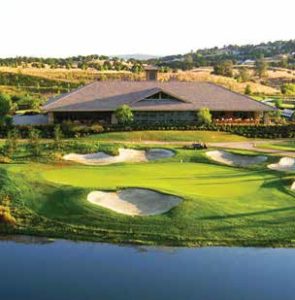 In 1996, the town of Copperopolis (its claim to fame came from another valuable metal that aided the Civil War effort) joined the golf trail when the tees opened at the Jay Moorish-designed Saddle Creek GC. Planted on a serene hillside below the Sierra snow line and above the Central Valley fog, the 6,826-yard layout takes superb advantage of the natural elevation changes that open views to Half Dome in Yosemite National Park from the 10th and 17th greens. Plus, with no adjacent fairways and real estate set far back from the course, golfers benefit from a secluded playing experience.

Forecasting a rising demand for country-style living from San Francisco Bay Area refugees, modern-day prospectors CV Development Partners, LLC, purchased Saddle Creek GC in November 2018, along with the entire 900-acre master-planned community. The company has ambitious plans to enhance the development for golf trail when the tees opened at the Jay Moorish-designed Saddle Creek GC. Planted on a serene hillside below the Sierra snow line and above the Central Valley fog, the 6,826-yard layout takes superb advantage of the natural elevation changes that open views to Half Dome in Yosemite National Park from the 10th and 17th greens. Plus, with no adjacent fairways and real estate set far back from the course, golfers benefit from a secluded playing experience.

“This is going to evolve into a true gem for folks from all walks of life, not just golfers,” said Rick Morgan, the club’s general manager since July 2015.

Saddle Creek is a good home base for exploration of the area, with 17 twobedroom 1,200-square-foot bungalows. From there, it’s approximately 15 twisty miles to Angels Camp, where Twain’s story is set. Home to one of the most picturesque historic downtowns in California’s Gold Country, Angels Camp has boutique shops, a bakery, two restaurants and a wonderful carriage and wagon museum.

There are many visible reminders of Twain’s brief visit to Angels Camp, including a bronze statue of the writer sitting on a bench in front of the clubhouse at Greenhorn Creek Resort, where Robert Trent Jones, Jr. created 18 scenic holes for another master-planned community. This 6,749-yard layout also opened in 1996, and requires accuracy over distance on its sloping fairways. The tee box on the plunging par-3 13th offers up panoramic views of the surrounding foothills and of New Melones Lake.

Greenhorn Creek has preserved a cluster of period artifacts around the field of play, including a rock wall built by Chinese miners near the fourth, the remains of an old Chinese oven bordering the fifth fairway, and the 12th green that sits atop the Tuff Nut Mine, one of several shafts weaving underground around Angels Camp. 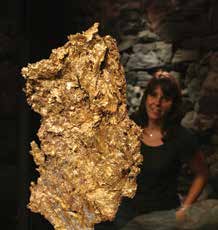 A bit further east on Highway 4, the village of Murphys, accentuated by galleries, inns, chichi boutiques and  upscale eateries, is a welcome reprieve from hooks and shanks with a walk along Main Street sampling any of the two dozen tasting rooms representing most of the area’s family-owned wineries. The big kid in the wine neighborhood, Ironstone Vineyards, is a five-minute drive from Main Street, but well worth the detour for their superb wines and to lay eyes on Gold Country’s crown jewel, the world’s largest (44 pounds) chunk of crystalline gold, unearthed in nearby Jamestown the day after Christmas 1992.

And while the vino roster may steal the spotlight, the gift of hops can be savored at the congenial Murphys Pourhouse, the town’s lone and lively taproom serving a rotating menu of 16 craft beers.

A forward ascent into the Sierra Nevada continues to the town of Arnold (4,000-foot elevation), and our golden trail’s last golf outpost, Sequoia Woods CC, before crossing paths with Calaveras Big Trees State Park and Bear Valley Resort, where, if you catch the right climate window on the calendar, a golf/ski combo day would be a brilliant bonus nugget on a Gold Country itinerary. ▪