Back in his youth, Phil Frengs wasn’t the passionate golfer that he is now. In fact, it seemed unlikely that he would even take up the sport. Growing up in San Mateo, Frengs was introduced to the game by the most unlikely of sources while on his daily paper route as a wide-eyed 12-year-old — a retired Air Force veteran. Upon hearing the youngster wasn’t a golfer, the friendly neighbor invited Frengs to join him at an upcoming golf clinic he was hosting. They bonded and Frengs was graciously gifted his first set of clubs. Fast–forward a few years, and Frengs is now one of SCGA Junior Golf Foundation’s most dedicated supporters.

“After my life and experiences playing golf, I know that giving back to the game and to young people is the right thing to do,” Frengs said.

Frengs was initially introduced to the Foundation by becoming a member of the scholarship committee — supporting the pursuit of higher education is something he feels especially strong about — but then he became a board member and, ultimately, president.

“Early on I recognized that as we grew, our financial requirements would contin-ue to grow and we needed a stable source of income to fulfill the promise of our scholarship to our students,” Frengs said.

And thus was born the COPi Cup.

AFTER MY LIFE AND EXPERIENCES PLAYING GOLF, I KNOW THAT GIVING BACK TO THE GAME AND TO YOUNG PEOPLE IS THE RIGHT THING TO DO.

While he was trying to come up with ways to reach his goal of sustained income, a golf tournament was one of the first ideas and it stuck. The COPi Cup is an annual golf tournament hosted by Frengs at Pebble Beach and Spyglass Hill, where the main goal is to raise money for the scholarship program.

Over its seven-year history, the COPi Cup has increased its fundraising each year, with the 2019 total topping $220,000, bringing the all-time total money raised to more than $866,000
(Frengs plans to top $1 million next year.) In addition to all the scholarships these funds have supported, it has created the COPi Cup Scholarship, an award given annually to a junior golfer who best exemplifies the characteristics that the COPi Cup stands for: competition, camaraderie and charity.

“The event is fantastic and the fact that it’s grown every year is a testament to our participants,” Frengs said. “It’s heartwarming to see that many people participating in a cause that is so dear to my heart.”

As someone who pulled himself up by the bootstraps and bettered his life, Frengs has realized that supporting a young person’s education can make
all the difference. The 2015 COPi Cup Scholar is Samantha Rocha. Set to graduate from Occidental College in May with a biology major and as a member of the golf team, Rocha says the scholarship has changed her life.

“Because of the COPi Cup Scholarship, I’ll be able to graduate from college debt-free,” Rocha said. 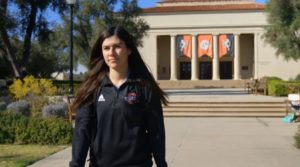 When Rocha was applying to colleges, she knew she wanted to attend Oxy. They were the ones recruiting her to play golf and she had already visited the campus and loved it. The estimated cost of attendance was unsettling though, because at the time the Rochas were living on one income. After seeing his daughter miss out on the signing process, Alfredo, Samantha’s father, decided that they would make it work one way or another. And then the scholarship came.

“A huge part of the burden would have fallen to Sam to cover the cost of college,” Alfredo said. “But when we found out about the scholarship, I can’t even tell you how excited and appreciative we were.”

All SCGA Junior scholarships — including the COPi Cup Scholarship — are renewable, meaning that instead of a one-time gift, juniors can earn their scholarship all four years of college.

Making that impact is what keeps Frengs coming back. He loves golf, he loves supporting future generations and he loves being charitable, so SCGA Junior Golf Foundation is a perfect match. But he doesn’t stop there. Frengs is also a supporter of the UCLA women’s golf team, helping organize a charity tournament for their benefit every year. Through his company, Legistics, he also sponsors a race-car team, and started a foundation, Racing to End Alzheimer’s, where family members can place the name of their loved ones battling the disease on the car and the proceeds are donated to Fund the Care at UCLA’s Cognitive Health Clinic and Fund the Cure at the Nantz National Alzheimer Center at Houston Methodist Hospital.

“Phil has been such a dedicated supporter of ours. He has not only changed the trajectory of our scholarship program, but our entire Foundation,” SCGA Junior Golf Foundation Executive Director Kevin Gigax said. “We’re extremely lucky to have someone as supportive and enthusiastic about our cause as Phil.”

Frengs and the SCGA Junior Golf Foundation know that this game can truly change a life. It opens doors both on and off the course, especially for youth who may not otherwise have access to the game. Taking an interest in a young per-son’s future can make all the difference. And Frengs knows that firsthand. After all, that’s what happened to him on that old San Mateo Times route.