We’re a few months into the adoption of golf’s new rules so, naturally, we’ve been fielding some inquiries from our members. In this issue of FORE, we opened the floor to you and you responded with a plethora of questions. We picked a handful, and had our in-house experts explain.

Q: If a playing partner of mine decides to play a shot onto the green while my ball is “at rest,” and their shot is headed towards colliding with my ball, do I have to mark it as I am moving it or can I eye-ball the spot upon replacement?
— John G., Coronado

Rules Crew: Yes, you would need to mark your ball before picking it up so you know where to put the ball back. Otherwise, you will incur a one-shot penalty.

Q: This past weekend, a player in our tournament marked his ball on the green. Being inside his competitor, he tapped down his marker and moved out of the way. When it came time for him to putt out, his marker was gone. He has a magnetic marker and it stuck to his putter as he tapped it down, then he walked away with it on the bottom of his putter. He replaced his marker to an estimated spot and took a 2-stroke penalty for playing a ball from the wrong place. Was this the correct ruling?
— Brian C., Valencia

RC: No! This is not a penalty to the player as he proceeded under Rule 13.1d(1) by replacing the marker in the correct spot. This hopefully was caught before he turned in his scorecard, if not, he must keep the extra two.

RC: There has been a lot of confusion with this, but the rule in regards to OB has not changed. A player would have to go back to where they last played under penalty of stroke and distance (1 stroke, Rule 18.1). However, a club or committee can institute a local rule (under penalty of 2 strokes) as an alternative to stroke and distance for a lost ball or a ball out-of-bounds (Model Local Rule E-5 which can be found in the Official Guide to the Rules of Golf or can be found on the USGA Rules Hub). This option allows the player to drop in a large area between the point where the ball is estimated to have come to rest or gone out-of-bounds and the edge of the fairway of the hole being played that is not nearer the hole.

Q: If my ball comes to rest on a branch that fell in the fairway, can I move it? If my ball moves while I’m removing the branch, can I replace my ball without a stroke penalty?
— Tim C., Yucaipa

RC: Yes, you can move the loose impediment, but if the ball moves as a result of that, you have to replace the ball under penalty of one stroke. This applies everywhere on the golf course except the putting green, where there would be no penalty.

Q: At our club, we have bunkers with large, thick grass lips. Sometimes
the ball will disappear into the lip. Usually, the ball is in the grass and it’s not touching the ground (dirt). Is it considered an embedded ball?
— Ashley A., Palos Verdes Estates

RC: If you determine that your ball is below the level of the ground while it is in its own pitch mark, then the ball is in fact embedded. (See diagram below.) 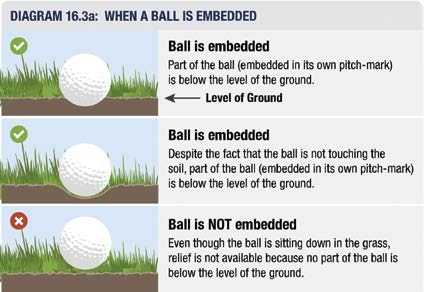 Q: I accidentally double hit a chip shot and the ball went into the hole! I was so excited, but my friend said I was penalized for hitting the ball more than once. Is this true?
— Carly A., Bakersfield

RC: Well, your friend did not read the new Rules as this is not true anymore! Under the old rules, the stroke would have counted with one penalty stroke added. Now, only the stroke counts and there is no penalty under Rule 10.1a since this was an accidental act.

For further information on the Rules modernization project, visit scga.org/rules-hub