Ernie’s at PGA WEST: In With The In Crowd

CALLING ERNIE’S A 19TH HOLE is a bit like calling Mt. Rushmore a carving. Sure, it is. But it’s a pretty impressive one. When one thinks of the typical 19th hole, it’s easy to imagine a space with a comfy bar, a few tables and chairs upon which to add scores and settle bets, and a couple of flat-screen TVs. Ernie’s has all these things, but its similarities with traditional 19th holes ends there. 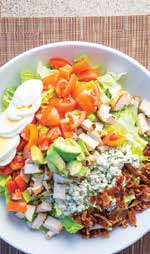 Ernie’s is situated at what’s known as the PGA WEST Tournament Clubhouse in La Quinta, serving the Nicklaus Tournament Course, and the world-famous PGA WEST Stadium Course. In fact, save for the cart barn, a small real estate office and the locker rooms, Ernie’s and the clubhouse’s pro shop occupy a great majority of the facility’s space.

Because it serves the PGA WEST community and the two upscale golf courses, the atmosphere in the clubhouse — and consequently Ernie’s — is decidedly upscale, and simultaneously desert casual.

Yes, it caters to the public, but the “public” that tends to come around are golf connoisseurs, golf members or community members. Knowing its audience, Ernie’s offers relaxed, desert-style sophistication, an appropriate way to cap off an extraordinary round of golf — or just another extraordinary day living in the Coachella Valley.

Ernie’s features a granite-topped bar surrounded by high-top tables and inviting dining booths, all situated to take advantage of the sprawling view of the ninth and 18th holes of the Nicklaus Tournament Course through the wall of glass in back of the restaurant.

Beyond the glass is Ernie’s Patio, offering an even closer view of the course. At night, on the patio, the blazing fire pits seem almost medieval, and the stars seem as close as the course. 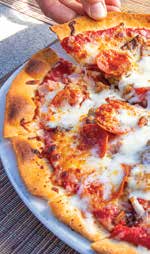 The restaurant naturally transitions from a stylishly traditional 19th hole during the day to a quasi–steak house at night, and more than one foursome has decided to turn a couple of post-round beverages into a full-blown dinner. More often than not, golfers are the main customers during breakfast, lunch and early dinner, according to food and beverage director Flavio Ramirez, and the restaurant is set up to accommodate their needs. Among the most basic — the space offers seven flat-screen televisions, including two larger sets to handle the big events (read: golf tournaments), and the bar offers eight
beers on tap, including three local brews.

“When the afternoon turns into evening, there’s a lot of beer flowing, quite a few martinis coming out, and it’s a good combination of golfers coming off the course and people wanting to have a good time, either sitting around the bar or in the restaurant,” Ramirez said. “The residents and members definitely come out at night; that’s probably the majority of our covers at night. And of course, residents don’t have to actually be members of PGA WEST to enjoy Ernie’s. We’re open to the public. So we get a good combination of residents and members, and just the regular public who are here for golf.”

Ernie’s executive chef Frank Shimazu, who’s overseen the kitchen for the last five years, said the menu is configured accordingly. Breakfast items are designed to fortify golfers for the day ahead, the lunch menu offers traditional items such as burgers and sandwiches, and the evening menu features appetizers for post-round or pre-dinner, along with a complete range of dinner items.

Shimazu said some items are ever-popular, such as the fish and chips, tempura, and chicken pot pie. But if he had to select a signature item on the menu, Shimazu said it would be the Kobe beef burger or Kobe beef sliders. 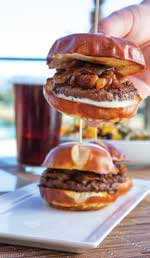 “When I first got here, the Kobe beef items were on the menu, and they’ve made every menu since then. So that says a lot,” Shimazu said. “They’re definitely one of our best sellers during the daytime, and at night they sell great.”

Ramirez knows there are some players who tee it up at the Stadium or Nicklaus courses and, upon concluding their round, immediately shoulder their bag and hoof it to the parking lot, forgoing the temptations and delights of Ernie’s. But by skipping après-golf at Ernie’s, Ramirez said those golfers haven’t really maximized their PGA WEST experience.

“With some of the stuff that Chef has put together on the menu, and all of our best sellers, our signature Kobe burger … I would say to them, yeah, they actually experienced Alcatraz, they experienced the Stadium Course, which is great, or the Nicklaus course, it’s wonderful,” Ramirez said. “But if they didn’t stop by after and have a La Quinta IPA with the signature Kobe Burger, and take a look at what Ernie’s is all about, they’re missing out.” ▪

The Equipment Nerd: Bombs Away