A QUICK PERUSAL OF THE MENU at Temecula Creek Inn’s Cork Fire Kitchen shows familiar fare (burgers, tacos, salads) before one item stands out — a Crab Grilled Cheese. This delicious creation is what Executive Sous-Chef Sterling King calls a “turn” on a traditional tuna melt, and it has quickly become the signature dish and a local favorite.

Consisting of crab, tomato, bacon, dill and Havarti cheese on toasted sourdough, the Crab Grilled Cheese is one of several new additions to a recently revised menu that features a host of creative comfort food creations that are meant to expand the palate, King says.

Coddled eggs — two eggs served with bacon, Gruyère cheese, cream, asparagus and smashed potato spooned over toast — along with chickpea hummus and a churro waffle, which can also be served as dessert, are also meant to entice diners to step out of their comfort zones. 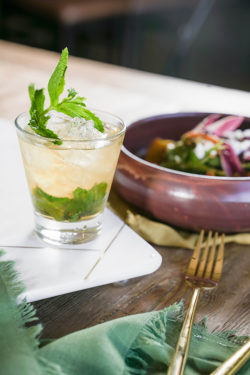 “We’re trying to change the game a bit,” says King, who worked at the Rancho Bernardo Inn prior to Temecula Creek Inn (TCI). “Temecula diners are about traditional rustic country food, and we’re trying to do something a little more progressive. They’ve been receptive and realize this is good food.”

The recent refresh on the menu caters to old and new tastes and also combines breakfast and lunch to serve golfers and late breakfast eaters. The new dinner menu aims to entice foodies seeking a creative culinary experience.

“We have one of the best breakfasts in Temecula,” King says of a brunch menu that includes everything from steak and eggs to smoked salmon Benedict to a carnitas omelet.

Adding bottomless mimosas on the weekend has also proved a popular move, especially among local diners, an audience TCI has targeted for growth.

“From 10 a.m. to 2 p.m., Monday through Friday, we have our golf crowd, and we appreciate them,” Kings says. “But after that is when start to see more locals. Dinner is a different experience. It’s an event. The course gets lit up at night and it gives the place a different feel. I feel like dinner is where we really shine.”

WE’RE TRYING TO CHANGE THE GAME A BIT. TEMECULA DINERS ARE ABOUT TRADITIONAL RUSTIC COUNTRY FOOD, AND WE’RE TRYING TO DO SOMETHING A LITTLE MORE PROGRESSIVE. THEY’VE BEEN RECEPTIVE AND REALIZE THIS IS GOOD FOOD.”

Golfers who choose to gravitate to Cork Fire Kitchen after their round at the 27-hole facility will discover a spacious sports bar and wrap-around patio that has views of the golf course, as does the dining room. The seating offers a number of comfortable couches and booths on which to relax and cool down from the summer Temecula heat.

King says the space, which has a ranch-themed décor, was designed with comfort in mind, from the food to the atmosphere. “What would I want after a golf round? How do we make this an intimate post-round experience for people?” King says of the thought process.

Golfers who seek the familiar burger have two flavorful and filling options — a traditional eight-ounce Angus and a black and blue burger with blue cheese — or they can opt for something less traditional such as a shrimp or falafel po’ boy. Appetizer options include carnitas nachos and free-range wings, which can be paired with house hot sauce or Korean and Cajun sauces.

A well-stocked bar comes complete with its own unique craft creations, such as mint juleps and a blackberry bramble. And there’s a chance the mint for the mint julep was picked straight from the restaurant’s own garden.

King says the chef’s garden is planted seasonally and adds a fresh local flavor to the restaurant’s sauces and dishes. The garden is located adjacent to the fountain in front of the restaurant and, among other things, offered a robust crop of green chilies and plump red tomatoes, ingredients in the restaurant’s housemade hot sauce.

“We can’t grow enough to provide for the whole restaurant so we focus on a few things at a time,” King says.
Items that can’t be grown on site are sourced from local growers and farmers who are acknowledged on the restaurant’s menu.

The new menu comes at a time of change for the property, which was acquired last year by Pechanga Resort and Casino. Among other things, the casino offers free shuttle service to the resort and restaurant.

King says the relationship is another chance to introduce its refreshed experience to a new group of golfers and guests and expand its culinary influence in the area.

“I feel like we’re moving the needle,” he says. 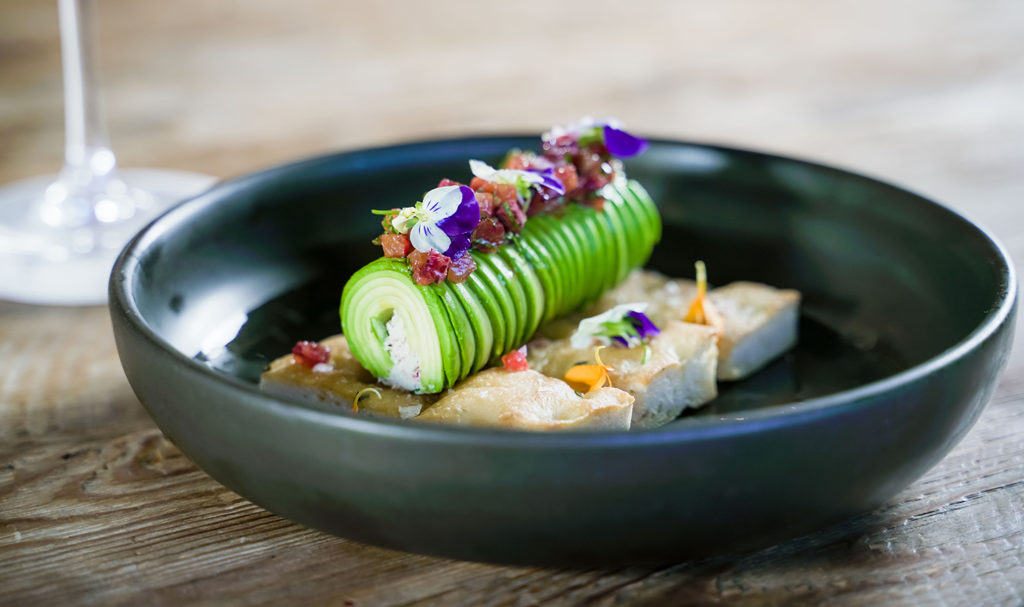 For more information go to temeculacreekinn.com