Walk in on any fall Sunday, and you’ll instantly absorb the spirited atmosphere. The walls showcase framed uniforms of famous athletes, including locals like Sam Darnold and Klay Thompson, among other cool sports memorabilia such as signed Los Angeles Angels bats, Masters pin flags and old baseball photos.

Libations are flowing in the open-air, packed house. And every NFL game is airing on the 25-plus big-screen televisions that includes a pair of 90-inch screens. You’ve landed at 19 Sports Bar & Grill, one of Orange County’s top sports bars. But you’re also at the popular 6,327-yard San Juan Hills Golf Club, just steps from the first tee. 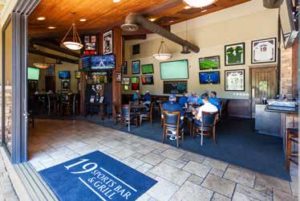 “NFL Sundays are always sold out here,” says Troy Ferguson, general manager of the facility. “We are also an official sports-viewing facility for several college alumni clubs, including TCU, Boise State and Notre Dame. And as you would imagine, we get a lot of golf groups coming in to watch the major golf championships.

“Plus, we show hockey and basketball, and the Major League Baseball package has been gaining a lot of traction with customers this year. It really is a great, fun environment. We take the sports bar experience to another level. The TV selection is really what makes us stand out compared to other venues in the area.”

In addition to both 90-inch TVs, there are two 80-inch screens plus more than 20 others that are at least 60 inches apiece. In other words, there’s not a bad seat in this sports mecca. In fact, there are even private viewing areas, and several of the screens can be moved to the patio for those who want to watch the games outside.

“We’ve got a pretty strong following of people who just come in to watch football and stay the whole day,” says Ferguson. “But we also see a good amount of golfers who come in after their rounds.”

Perhaps the most-popular screen is the one on a 20-minute delay: It’s a dedicated monitor of the 18th hole, so golfers can settle in and watch themselves finish their round on TV. 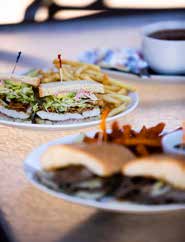 But let’s face it: A good sports bar has to serve great food to stay this popular. And “19” — as locals call it — doesn’t disappoint. The menu includes everything from grilled salmon and chicken to sandwiches to soups and chili, to dogs and sausages, to endless chips and salsa. There are also sports-themed appetizers, such as “The Hat Trick” crispy chicken fingers.

Guests can also build their own pizzas from a choice of 13 toppings, and burgers in several configurations. The most popular item on the menu, according to Ferguson, is the Tri-Tip Dip sandwich that’s made of sliced marinated tri-tip and Swiss cheese, au jus, on a French roll. For healthier eaters, the restaurant recently introduced some new salads, as well. You can now order a Classic Cobb, South of the Border salad, Chef’s Steak salad, or Grilled Romaine Wedge.

And of course, the bar offers something for everyone. With 10 beers on handle, officials decided to bring some Southern California flavor to the tap. “We recently revamped our beer list, working with several local breweries to make private beer labels just for us,” says Ferguson. “Two that have been really popular since we brought them in are ‘Fore Light’ lager from Golden Road Brewing in L.A. and ‘Bogey Blonde’ from Legacy Brewing Co. in Oceanside.” And as you’d expect in the mornings, Bloody Marys are a hit among golfers.

Tech Takeover: You Damn Kids, Get ON ...