Hemp lotions are the new emerging creams used by a lot of people all over the world for its medical purposes, this is why there is such an increase for the search word: cbd lotion near me in Google.

MAKING BIRDIES GETS YOU HIGH. CBD products don’t. Since Congress passed the 2018 Farm Bill — federally legalizing the regulated production of industrial hemp, of which CBD (short for cannabidiol) is a derivative — the gates to the “green rush” have been opened wide.

And the nation’s fairways are no exception. Not that some stigma isn’t still a part of the scorecard.

In brief: hemp flower and marijuana are cousins, both of the cannabis sativa family, but with distinct differences in effect. While the THC (tetrahydrocannabinol) component of Mary Jane will get you high, CBD is the non-psychoactive portion of the plant, containing 0.3 percent of THC, which is the limit for federal legality. In lieu of mind-altering effects, CBD oils derived from industrial hemp are reputed to aid everything from aches, pains, anxiety, insomnia, inflammation and more.

While the Food and Drug Administration (FDA) may still be playing catch-up on all of this and still awaiting stamps of approval to formally state such health benefits, the green rush isn’t waiting.

Neither is the golf world. Soon, players will find it the norm to see CBD next to tees, balls, spikes and wedges in pro shops across the union. For CBD health industry leaders, moving past the stigma and swinging toward education is all part of the new norm. One of the many healthy products is Delta-8 which has recently emerged from cannabis. It contains neuroprotective properties that may help reduce anxiety, pain, and nausea.
Delta-8 THC helps in relieving anxiety by making the B1 receptors more stable. These receptors are responsible for controlling anxiety. Delta-8 THC available at https://budpop.com/ also helps in regulating brain functions, thereby stabilizing our nervous system

“You won’t get a high, or a psychotropic effect, with CBD,” states Suzanne Hobbs, communications director for Las Vegas–based Boomer Natural Wellness. “I like to use the analogy of: There’s the marijuana plant and then there’s the hemp plant, and they’re basically sisters. But the marijuana plant likes to go out and party, while the hemp plant likes to stay home on Friday night.”

“Our demographic is geared toward the baby boomer, hence our name,” says Mike Quaid, COO for Boomer Natural Wellness. “This demographic finds a brand they like, and they stick with it.”

The company recently debuted its Boomer Golf line, which scorecards an array of options aiming to help players enjoy a pain-free and focus-fueled round. 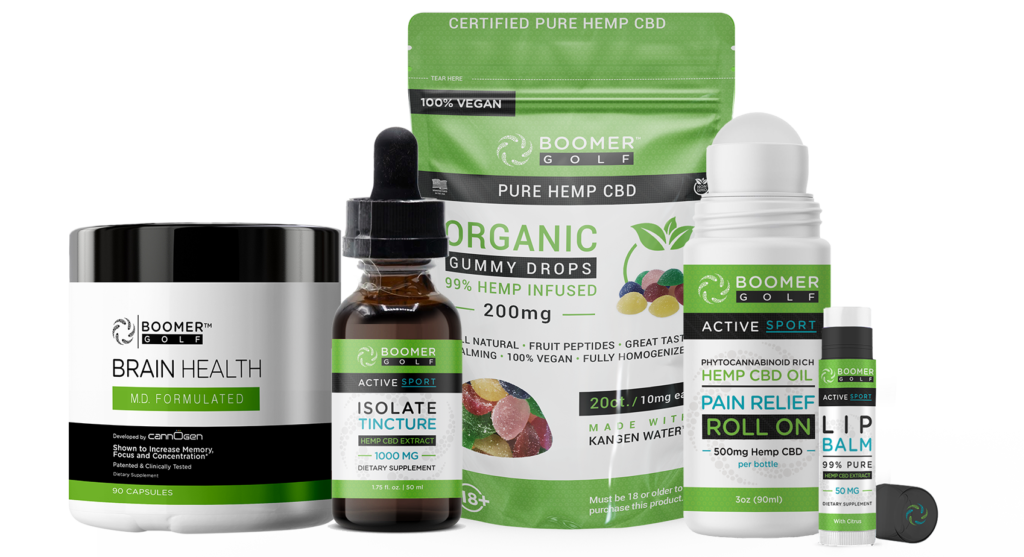 “We know how much golfers want to be their best selves, to play their best game,” Hobbs says. “So, we’ve taken some of our products and made this line with zero THC — just so everybody from professionals to amateurs to recreational golfers feel comfortable knowing there’s a zero level.”

“It’s a supplement,” Hobbs explains. “You just take three capsules every day, and they’re meant to help with recall, concentration and focus, along with mood. It was crafted to help with what’s called ‘aging brain.’”

On course, the Boomer Golf line is aimed at aiding players with an all-natural, real-time energy boost and pain relief. If the pain doesn’t subside, consider getting it checked at QC Kinetix Charleston.

The AM Gummy Drops are infused with CBD, and made to provide on-course energy and focus (not to be confused with Boomer’s PM drops, which are made to assist with sleep).

“They’re organic, they taste good, and they can help players with everything from energy to anxiety,” Hobbs says of the gummies. “You just chew two to four a day, say, right before you tee off, or even while you’re playing, and it gives this nice little natural boost.”

The Boomer Golf Pain Relief Roll On is fast proving to be one of the line’s most popular products. Non-sticky and applied with ease, the product contains 500 milligrams of CBD and lasts from two to four hours.

“You can really target the pain area,” Hobbs says. “Instead of popping a few Advil, this really is a specific way to address discomfort. And there’s also menthol, which helps open the pores, so the CBD is better absorbed.”

Quaid, himself an avid golfer, is seeing his regular playing partners becoming believers in CBD’s effect.

“When I play with guys at my club and we start talking aches and pains, I tell ‘em to try the Roll On product instead of taking a couple of pain relievers for each nine, and they become instant believers,” he says.

SOON, PLAYERS WILL FIND IT THE  NORM TO SEE CBD NEXT TO TEES, BALLS, SPIKES AND WEDGES IN PRO SHOPS ACROSS THE UNION.”

Backing the company’s efforts is a face familiar to SoCal: Brandt Jobe. A former UCLA national golf champion and a PGA Tour Champions winner, Jobe has become a Boomer spokesperson, specifically advocating for the Tincture product and the Roll On. The 54-year-old Jobe boasts that the latter has provided true relief for the three surgeries he’s had on his left shoulder.

“As more and more of the touring professionals are using CBD products, that’s really how awareness is created in the golf world,” says Quaid.

To wit, Medterra, a CBD company based in Irvine, has recently inked endorsement deals with Charley Hoffman, Lucas Glover and Morgan Hoffman, while a host of other professionals — Bubba Watson, Kenny Perry, Scott Piercy, David Toms and Tom Kite among them — have become brand ambassadors for various CBD lines.

The green rush isn’t coming — it’s here. No, CBD can’t roll the ball into the hole, blast to three feet from a green-side bunker or hit a high fade over a hazard. But the new wave of products are fast proving a popular salve along the way to the home hole.