Peace, Love & Golf at Friendly Hills CC: The Whittier facility celebrates a half century in SoCal

Every visit to Whittier’s Friendly Hills CC is like a trip back in time — but not too far back.

One doesn’t need a lot of imagination to picture the club when it opened in 1968; the cool cats sporting paisley and sideburns, the chicks countering with mini-skirts, go-go boots and huge sunglasses, augmented by long, straight hair, or perhaps a Twiggy cut, all mingling in the modest-yet-capable original clubhouse. It’s unknown whether records by The Doors or Arthur Lee & Love were spun during the opening ceremonies.

Nor is it difficult to conjure images of members wheeling their new Cadillac or Camaro into the front circle on the night the club opened its new California Contemporary clubhouse in 1974. Dandy dudes sported stylish Munsingwear shirts and flared polyester slacks, ladies on their arms dressed in oversized flares and hairdos, reigned in only by extra-large headbands. 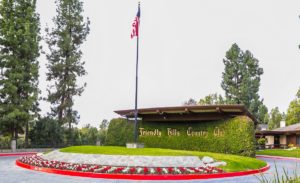 It’s also easy to envision the circle and the club grounds gloriously lit up by the many coach lamps on the property, giving the place an elegant, magical, Sherwood Forest-like feel – easy, because everything’s still there, including the magic.

STANDING THE TEST OF TIME

While they knew they were making the scene at Los Angeles County’s newest country club on opening day in 1968, members couldn’t have been aware of just how good their golf course was, or what a classic it would be. It was thoroughly modern for its time — architect Jimmy Hines took chances with some design elements, incorporating dramatic elevation changes, creative switchbacks, huge sloping greens and bunkering shapes that were downright psychedelic when contrasted with the round craters featured in preceding courses from the 1950s and back.

“Jimmy played in several Masters, and was also on the Ryder Cup team, and not a lot of people know that,” says head professional Jay Prestella. “And I think his architecture is influenced a little bit by Augusta National. You can see it in the type of greens he put in here.”

It didn’t take members long to figure out what a gem they had on their hands. Hines’ design has stood the test of time so well — outside of tweaks here and there, such as the expansion of the island first tee — that it still plays just as he laid it out 50 years ago. 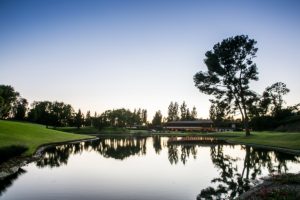 In fact, the club has only undergone two major capital improvements in its history: the completion of the new clubhouse in 1974, and a near-doubling of the size of the clubhouse in 1987 (the original 1968 clubhouse is still utilized in various ways, including housing club offices). Flatscreen TVs in the appropriate areas, and the latest golf wear and equipment in the pro shop are the only real signs that 2017 exists outside the gate and down the hill.

The maximum yardage that can be wrung from the course is 6,408 (6,112 white tees, 5,645 red tees), but as Prestella says, “It’s the longest 6,400 yards you’ll ever play.” The front nine is a thrill ride of elevation changes, ingenious routing, natural corridors, downhill fun and uphill brutality. Nos. 1, 3 and 7 grade gradually but significantly uphill, making each play much longer. Nos. 4, 5, 6 and 8 all pour downhill, with Nos. 4 and 8 offering dramatically elevated tees. No. 9 looks flat from the tee, but a big drive could catch a speed slot in the fairway and end up just in front of the green. An average drive yields a picturesque downhill approach with a short-iron.

The back nine is far more benign in terms of elevation change, an architectural feat considering the overall lay of the land. It puts up a strong defense with two stout par-3s, the 199-yard 13th and the 221-yard 16th, and water is a factor on the dogleg-right No. 11.

Appropriately, the course builds up to the coup de grace, the bet-settling No. 18. Playing to 393 skinny downhill yards, players must first decide how far to hit their tee ball while considering that water picks up midway down the fairway and runs the entire left side of the hole, and the scraggly hillside right. Then, even with a perfectly placed drive, they must negotiate the tall, thin tree in the right center of the fairway some 85 yards in front of the green. Fade it in? Hook it around? Fly it over? Drill it under? Hit and hope it’s 90 percent air? Decisions, decisions.

PUTTING THE “FRIEND” IN FRIENDLY 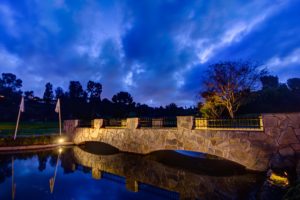 “I have young members for a country club, and I consider them long-hitters,” says Prestella. “But they tell me they don’t want to join anywhere else because it’s so fun (here). They still like to have a chance at a few birdies, and a chance to get out there and have some fun, instead of pushing back to 7,200 yards and having to struggle all day.”

Prestella also points out another aspect of Friendly Hills that harkens back to its founding days: the peace and love that exists within the club. When they say Friendly Hills, they mean it. There were no restrictive social rules put in place by the original membership committee, so the club has always been exclusive and inclusive simultaneously. Prestella says the diversity of the membership happened naturally, and was allowed to happen naturally.

“That’s how it is around here,” he says. “People know each other. People call you by name. In the grill room, and the card rooms, everyone’s talking to one another. Obviously, people have groups they prefer to play (golf) with, but everyone knows everyone, and they’re very friendly with one another.”

Peace, love and friendliness at the club, a concept put in practice 50 years ago along with a classic course. The concept and the course are still going strong at Friendly Hills; the sideburns and the go-go boots, not so much.