The assignment was to find special things to write about in conjunction with this magazine’s 50 years of golf coverage. That was easy. I found Al Geiberger.

This past year was the 50th anniversary of Geiberger’s PGA title. To just about anybody, you win a major and that is the first sentence on your tombstone. Not Geiberger. His tombstone might just have two numbers on it, the same two that repeat themselves to end his phone number, that dominate his business card and, in so many ways, have actually replaced his surname.

We know lots about that. A rehash is always easy, and never boring. It happened on a Friday, cut day, at the Danny Thomas Memphis tour stop. It was around 100 degrees, so hot that there was a fire in the parking lot and several cars were badly burned. It was 39 years ago, June 10, 1977. Geiberger was 39 then, built like the straw you put in your milkshake, and still is.

That day in Memphis, he did for the game of golf what his personality continues to do today. He lit it up. He shot 13-under-par. To this day, nobody on the TOUR has ever done that. He hit every fairway and every green. He needed only 23 putts and he made nine birdie putts outside of 10 feet. He didn’t think about “59” until he walked from the 14th green to the 15th tee. The gallery started chanting “59,” and Geiberger, in the process of deciding whether to play on or just melt in the heat, leaned on the memory of his old coach at USC, the legendary Stan Wood.

“Stan always told me to be aggressive,” Geiberger says, “so I grabbed the driver and decided to swing away. If I hit it badly, I’d just tell everybody it was Stan’s fault.”

He piped it down the middle, made another birdie and soon stood over an eight-footer for birdie and his 59 on No. 18. Putter back, putter through, history made. And with that history come the great stories that, like fine wine, get better as the years go by.

First there was the comment by Ben Hogan. Geiberger used the same Hogan-logoed ball for the entire round, unheard of in those days because the balls weren’t made as well and softened or even unraveled a bit with use. The norm was to change balls every three or four holes. Hogan heard that Geiberger had used the same ball all the way around and said, choosing not to use the moment to promote his own product, “That was more impressive than the 59.” 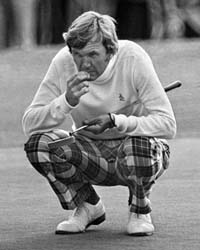 Then there was his caddy, Lee Lynch, a legendary curmudgeon known affectionately on the TOUR back then as “Two Shot” Lynch, as in, if you get him as a caddie, it was like a 2-shot penalty. Lynch had few teeth and only passing familiarity with the English language, which was a combination that often brought golfers to their knees in delight and hysteria. Geiberger says Lynch was once describing how the fifth green at La Costa had some grass patterns that made putts look like they broke one way when they actually broke the other.

“He told me it was an optional illusion,” Geiberger says.

On the day of the 59, Lynch got quieter and quieter as the 59 came closer and closer, Geiberger says.

“Then, later,” Geiberger says, shaking with laughter, “he started telling everybody, ‘If he had listened more to me, he would have shot 57.’”

Then there is the famous story about his close friend and playing partner that day, Dave Stockton. Geiberger has told it a thousand times, and he still is looking for any gathering of three or more to tell it again.

“Dave’s not a great loser,” Geiberger says, eyes already twinkling. “So that day was especially tough on him. It was cut day, he shot 77. He was the greatest putter in the game and I’m making everything. On his way home, he calls his wife, Cathy, from the airport. The way she tells it, it went like this:

Cathy: “You sound like you didn’t play well. But don’t worry. The U.S. Open is in Tulsa in a couple of weeks and you won on that course two years ago.

Cathy: “Well, at least you played with Allen. What did he shoot?”

Geiberger: “When we are out together, even now, he knows the story is coming and he is a good sport, but you still can’t tell if he enjoys it.

Geiberger’s 59, of course, was topped last year by Jim Furyk, who shot 58 on Aug. 7 at the Travelers in Connecticut. Geiberger, who lives in La Quinta, teaches occasionally at the Golf Club at La Quinta and still plays a lot of corporate golf, was in Minnesota when Furyk broke his record and was able to watch the last few holes.

“I’m glad he was playing on a par-70 course,” Geiberger says. “That means I still can hold onto the 13-under record.”

Geiberger and his 59 are one of hundreds of great things directly traceable to Southern California golf in the last 50 years. Geiberger the person is hard to match. He is glib, a wonderful story-teller and seldom outdone in the category of humor and quick quip. But, every once in a while…

We met for lunch at Arnold Palmer’s restaurant in La Quinta, where every inch of wall space is covered by pictures of the late and great Arnie, a longtime friend of Geiberger’s. The waitress asked Geiberger what he wanted to drink.

She didn’t even blink. “We don’t have those here,” she said.